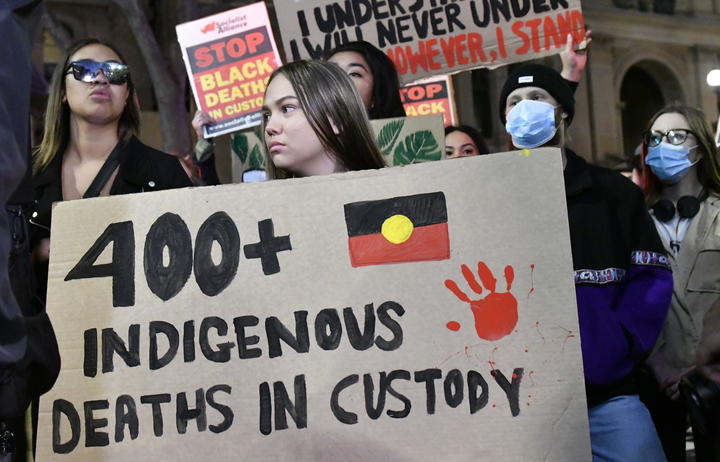 A demonstration for George Floyd in Sydney attracted hundreds of people, despite restrictions on gatherings during the pandemic. Photo: Izhar Khan/NurPhoto/ AFP

She said a small protest request was placed with police earlier this week and said the surge in attendees prompted police to take the organisers to the Supreme Court.

"This was because the protest could not guarantee adherence to the health orders," she said.

"We can't afford to have an exception for anybody."

NSW Police Commissioner Mick Fuller said the protest began with 50 people planning to go, but had ballooned out to more than 10,000 planning to attend.

"The only options were for the protesters to cease their wish to protest, or for us to take the matter to the Supreme Court," he said.

"We have commenced legal action on the basis of: we don't believe the protest can be conducted in a safe way."

Fuller said Tuesday's protest was a breach of health orders, after hundreds of people turned up at Sydney's Martin Place to peacefully protest the treatment of Indigenous Australians. 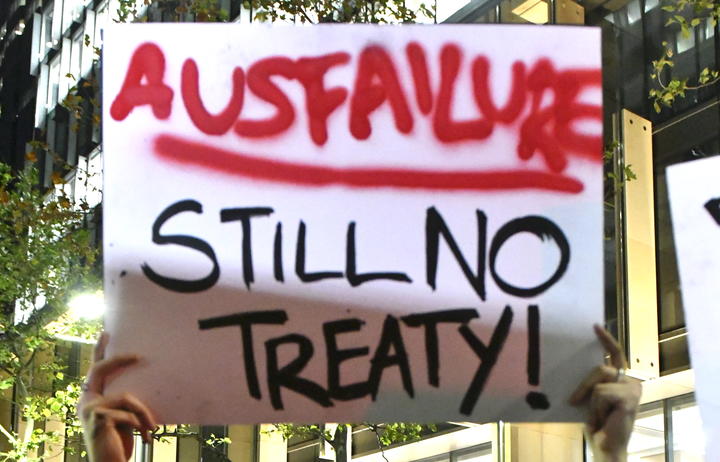 A protest sign at a march for George Floyd in Sydney this week. Photo: Izhar Khan/NurPhoto/ AFP

"Obviously we can and we have during Covid-19 showed a high degree of discretion," Fuller said.

But he said Saturday's rally organisers and NSW police were unable to come to an agreement this morning.

"We tried, we've negotiated and we've hit a stalemate."

NSW police said even if the Supreme Court allowed tomorrow's rally, there would be a limit of 500 people.

"There is strong movement right across the world showing solidarity with those communities who have for too long faced police violence alone."

He said he expected people would turn up to protest "no matter what the police say".

"The choice for the police is to work collaboratively to make this assembly safe, socially-distanced and peaceful - or to keep going down the same aggressive path that got us here in the first place."

Hundreds of people marched through Sydney's city on Tuesday night, calling for better treatment of Indigenous Australians, as protests continue across the United States over the death of George Floyd.

NSW Police Minister David Elliott criticised the march, calling it "not my sort of cause", but he said it was out of his control.

"Anybody who goes to a mass gathering during a pandemic is certifiably insane, they are nuts," he said.

"I have literally been up half the night talking to senior police, taking legal advice, but as the premier said yesterday, there are things in our society that are just virtually impossible to stop and the right for political freedom is one of them," Elliott said this morning.

"We're all doing our bit … when people make enormous sacrifices right now I think that situations like this and protests like this one on the weekend clearly shouldn't go ahead," Perrottet said.

Elsewhere, police in South Australia issued an exemption to coronavirus restrictions to allow a Black Lives Matter protest to go ahead tomorrow.

However, coronavirus case numbers in SA are significantly lower than NSW, which is Australia's worst-afflicted and most populous state.