The United States now has now overtaken Italy to have the highest death toll from coronavirus in the world. 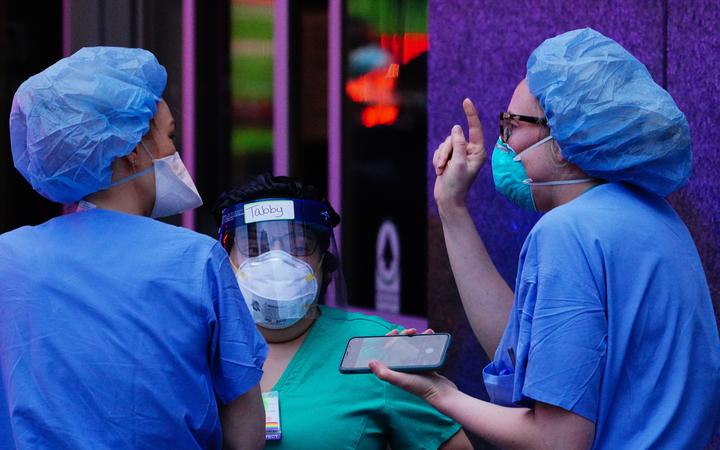 Nurses take a break on their shifts at NYU Langone Hospital in New York City, during the coronavirus pandemic. Photo: AFP

The latest data, compiled by Johns Hopkins University, shows more than 20,000 people in the US have now died.

The grim milestone comes shortly after the US became the first nation to record more than 2000 virus deaths in a single day.

The governor of New York Andrew Cuomo said on Saturday the state's death toll appeared to be stabilising.

Announcing a 24-hour figure of 783 new deaths, he noted the last several days had seen around the same number.

"That is not an all-time high, and you can see that the number is somewhat stabilising but it is stabilising at a horrific rate," Cuomo said. "These are just incredible numbers depicting incredible loss and pain."

New York state has become the epicentre of the outbreak in the US, recording more than 180,000 of the country's estimated 520,000 cases.

As of Saturday, every single US state has declared a disaster in response to the outbreak. 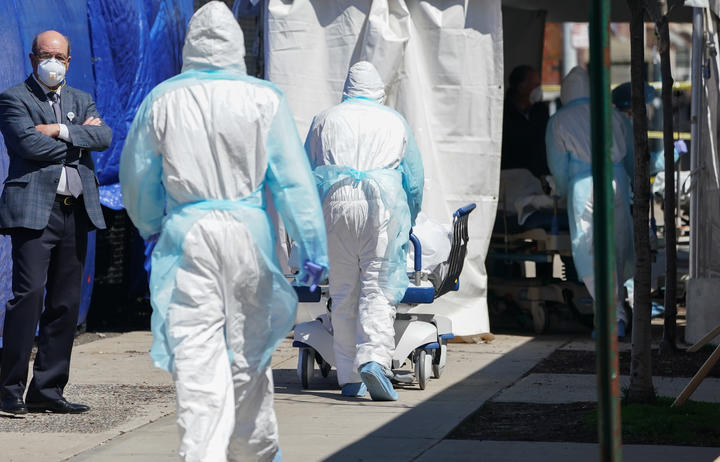 Bodies are moved to a refrigeration truck serving as a temporary morgue at Wyckoff Hospital in the borough of Brooklyn in New York. Photo: Bryan R. Smith / AFP

As of Saturday afternoon Italy had reported 19,468 coronavirus deaths while the US had 20,283, according to the Johns Hopkins tally.

There are now at least 522,286 recorded cases of Covid-19 across the United States.

Dr Anthony Fauci, US infectious diseases chief, has said the country is "starting to see the levelling off and coming down" of cases and deaths but says mitigation efforts such as social distancing should not be pulled back yet. 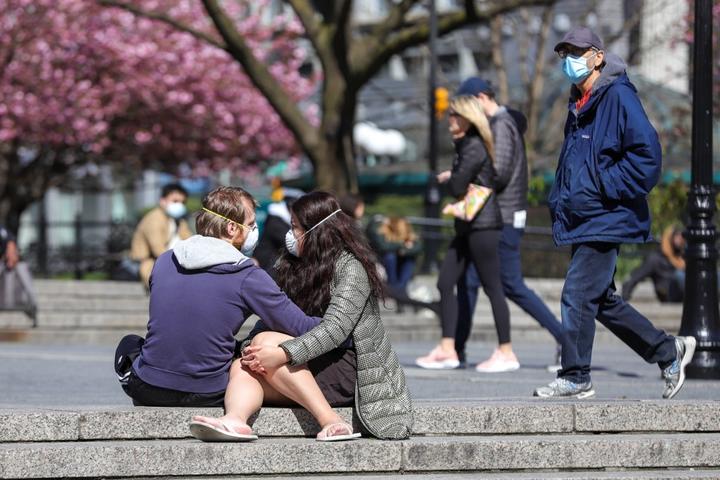 A couple in their protective masks relax in Union Square in Manhatten. Photo: AFP

The president is facing twin pressures from the outbreak because as well as the rising number of deaths, at least 16 million jobs have been lost in recent weeks as virus restrictions cripple the country's economy.

He said on Friday that a new council, made up of business and medical figures, would be announced next week to help him with the "biggest decision I've ever had to make" on when to relax measures.

It comes as Congress continues to spar over the next stage of Covid-19 financial relief.

In a statement they described the move as a "reckless threat" which blocked "job-saving funding".