The US recorded the most Covid-19 deaths in a single day, with 1736 fatalities reported. 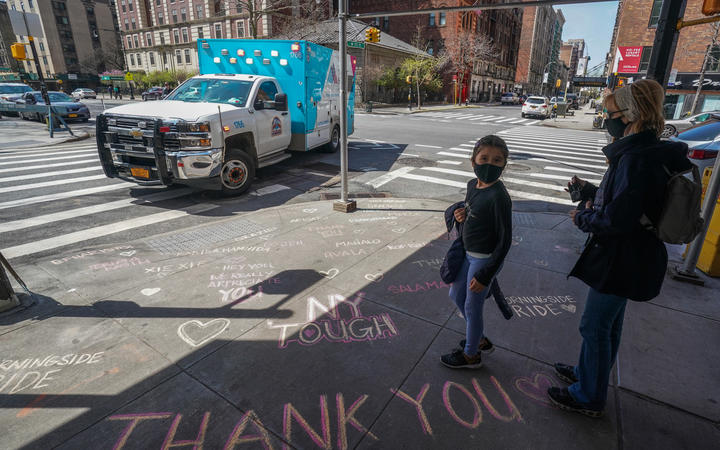 Thank you messages are written on the sidewalk outside of Mt. Sinai West Medical Center in New York. Photo: AFP

It brings the total number of deaths in the country to 12,722, according to data from Johns Hopkins University.

The US has more than 398,000 confirmed cases, the highest number in the world. Global cases have exceeded 1.4 million.

However during a press conference President Donald Trump said the US might be getting to the top of the "curve".

Meanwhile the city of Wuhan in China, where the infection first emerged, ended its 11-week lockdown.

The new figures announced on Tuesday are up on the previous record of 1,344 which was recorded on 4 April.

The number of deaths recorded on Tuesday is expected to rise with some states yet to share their totals.

The family of American singer-songwriter John Prine has confirmed his death from complications related to coronavirus.

Known for songs such as Angel from Montgomery and Sam Stone, Prine died in Nashville on Tuesday at the age of 73. His wife tested positive for coronavirus and recovered, however, Prine was hospitalised last month with symptoms and placed on a ventilator.

A number of musicians including Bruce Springsteen and Margo Price have paid tribute to him.

How hard has New York been hit?

A large proportion of the deaths announced were from New York state. Widely considered the epicentre of the outbreak, it recorded 731 deaths on Tuesday.

It is on the cusp of overtaking the entire country of Italy with its number of confirmed cases.

Governor Andrew Cuomo said the state appeared to be nearing the peak of its pandemic. Hospital and intensive care admissions were down.

The governor urged people to stay inside and continue with social distancing.

"I know it's hard but we have to keep doing it," he said.

New Yorkers have been told to avoid large gatherings as Passover and Easter approaches.

Elsewhere, the state of Wisconsin pressed ahead with an election on Tuesday, despite a state-wide stay-at-home order amid the escalating outbreak.

What did Trump say about the WHO?

During a press conference on Tuesday, President Trump said he was reluctant to discuss further but the US might be on track for fewer deaths than projected.

It was thought that as many as 240,000 people in the US could die in the pandemic, according to the president's task force. 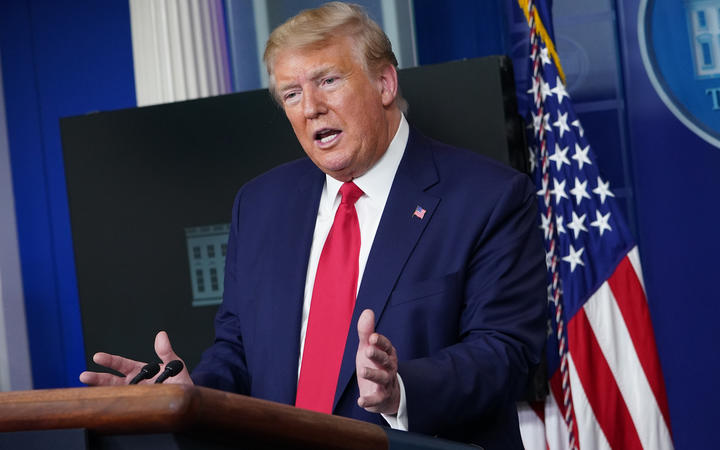 He also said the US might be getting to the top of the "curve" of the outbreak.

During the briefing, he also attacked the World Health Organisation (WHO), saying it had issued bad advice and had been too focused on China.

"The WHO really blew it. For some reason, funded largely by the United States, yet very China centric," he said.

He also said the US would be withholding money meant for the WHO.