The daily number of coronavirus deaths has fallen in Spain for a fourth consecutive day, boosting hopes the country has passed the outbreak's peak. 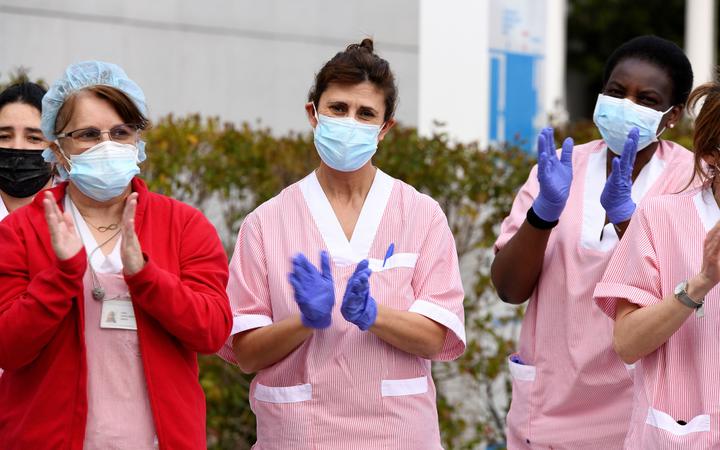 Health workers at the Puerta de Hierro hospital in Madrid on 5 March 2020 respond to applause in support of their work during the Covid-19 pandemic. Photo: AFP

The nation has more than 135,000 confirmed cases, the most in Europe, but new infections have been slowing.

Slowing infection rates in a number of European countries are raising hope that strict social distancing measures are curbing the spread of Covid-19 - the disease caused by the virus.

On Monday, Austria's chancellor announced plans to start easing some of the restrictions in place because of the pandemic.

There have been almost 1.3 million cases and 70,800 deaths confirmed around the world since the virus emerged in China in December, according to a tally by Johns Hopkins University.

What are the latest Spanish figures?

Spain's total number of cases is second only to the United States, which has a much larger population.

The country of 47 million people also has the second-highest death toll in the world, behind Italy. But Monday's figure of 637 is the lowest recorded in almost two weeks, since 24 March.

It is a drop from the 674 new deaths confirmed on Sunday. The daily death toll hit a peak of 950 last Thursday.

María José Sierra, deputy head of Spain's health emergency committee, said the pandemic's growth rate appeared to be slowing down "in almost every region" of the country.

Officials plan to widen coronavirus testing to include those without symptoms.

"It is important to know who is contaminated to be able to gradually lift Spanish citizens' lockdown," Foreign Minister Arancha González said in a TV interview.

Checkpoints were lifted on Monday at a number of hard-hit towns in the Catalonia region.

Prime Minister Pedro Sánchez said at the weekend that some restrictions, including keeping non-essential workers at home, could be lifted after Easter.

Businesses, including shops and restaurants, have been closed since 14 March and residents have been told to stay home and only go outside to carry out essential tasks.

The pandemic has claimed more than 50,000 lives across the continent.

The death toll in Italy is the highest in the world, standing at 16,523.

On Monday, the civil protection ministry reported 636 new deaths. That is 111 higher than Sunday's toll - the lowest since 19 March - but 45 lower than Saturday's.

The number of new infections increased by 1941, but continued a downward trend.

In Austria, where a total of 220 deaths have been reported, Chancellor Sebastian Kurz announced plans to begin easing some of the restrictions imposed there. If Austrians continued to comply with the current measures, smaller, non-essential shops could be allowed to re-open in just over a week's time, he said.

Meanwhile, the French finance minister warned that the economic contraction this year would most likely be the worst for the country since World War Two.

France reported 833 new deaths in hospitals and nursing homes, bringing the total to 8911 since 1 March. The daily toll was 315 higher than the previous 24 hours.

Germany's Chancellor, Angela Merkel, said the pandemic represented the biggest challenge the European Union had ever faced. She reiterated that her government was ready to contribute to helping the bloc economically.

In the United Kingdom, Prime Minister Boris Johnson remained in hospital but was in "good spirits", according to a spokesman. The 55-year-old remains "under observation" after being admitted to hospital with persistent symptoms of coronavirus as a precautionary measure on Sunday.

The Department of Health said on Monday that 439 more people had died in hospital after testing positive for coronavirus, taking the total death toll to 5373.