British Foreign Secretary Dominic Raab has said he is confident Boris Johnson will recover from coronavirus, describing the prime minister as a "fighter". 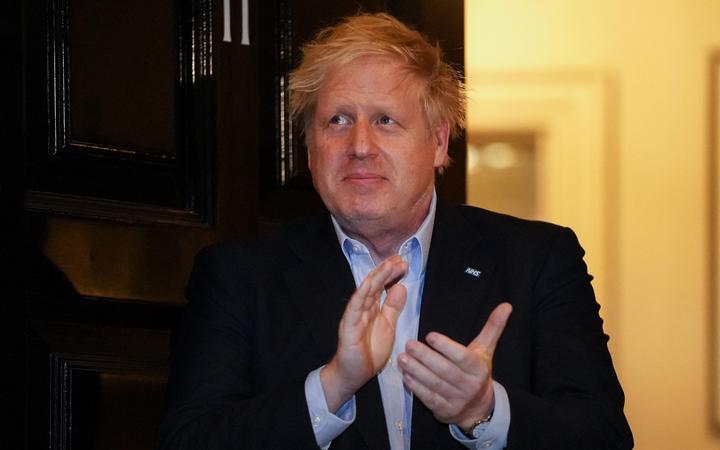 Johnson was admitted to St Thomas' Hospital in central London with "persistent symptoms" of Covid-19 on Sunday and was moved to intensive care on Monday at 19:00 BST after his symptoms worsened.

Speaking at the daily coronavirus briefing, Raab said the prime minister remained in "good spirits" and was breathing without assistance. He described the PM as not only a colleague but "also a friend".

The Queen has sent a message to Johnson's family and pregnant partner, saying they are in her thoughts.

Speaking at the daily coronavirus briefing, Raab, who is deputising for the PM, said: "All of our thoughts and prayers are with the prime minister at this time, with Carrie and with his whole family," he said

"And I'm confident he'll pull through because if there's one thing I know about this prime minister: he's a fighter. And he'll be back at the helm, leading us through this crisis in short order."

It comes as the number of coronavirus hospital deaths in the UK rose to 6159 - a record increase of 786 in a day, the Department of Health and Social Care said, compared with 439 on Monday.

Raab said Johnson was receiving standard oxygen treatment and breathing without any assistance, such as mechanical ventilation or non-invasive respiratory support.

The foreign secretary said he was standing in for the prime minister "whenever necessary", including leading the daily meetings of the coronavirus "war cabinet".

He said he had total confidence in the arrangements Johnson had put in place to allow the foreign secretary to deputise for him.

The cabinet has very clear instructions from the prime minister while he remains in hospital, Raab added.

"Well first of all, decision making by government is made by collective cabinet responsibilities, so that is the same as before.

"But we've got very clear directions, very clear instructions from the prime minister, and we're focused with total unity and total resolve on implementing them so that when he's back, I hope in very short order, we will have made the progress that he would expect and that the country would expect." 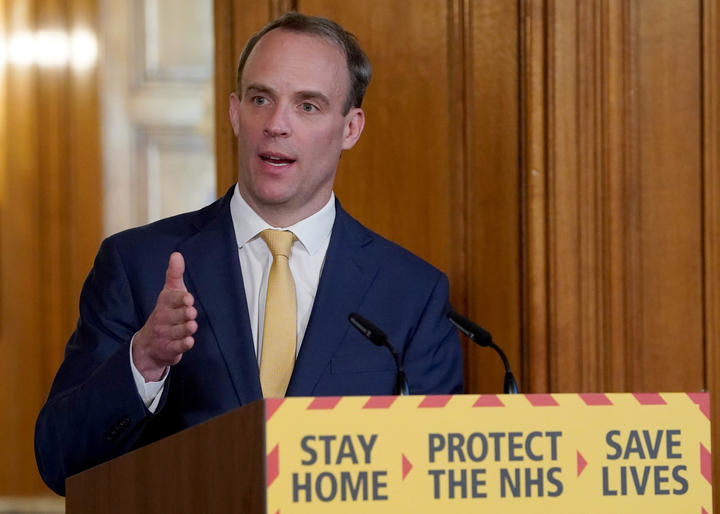 Gove said he did not have symptoms but a family member did. He is continuing to work at home.

Johnson's condition means his fiancee, Carrie Symonds, who is pregnant with their first child, is unable to visit him in hospital.

Buckingham Palace said the Queen had sent a message to Johnson's family and partner saying she was thinking of them, and wished the PM a full and speedy recovery.

Prince William also tweeted a personal message of sympathy to the PM's family, signing it off with his initial "W", while his father, the Prince of Wales, sent a message from himself and the Duchess of Cornwall wishing Johnson a "speedy recovery", Clarence House said.

In a statement on Tuesday, a Downing Street spokesman said: "The prime minister has been stable overnight and remains in good spirits. He is receiving standard oxygen treatment and is breathing without any other assistance.

"He has not required mechanical ventilation or non-invasive respiratory support."

A ventilator takes over the body's breathing process when disease has caused the lungs to fail.

Johnson does not have pneumonia, Downing Street added.

Dr Jon Bennett, president of the British Thoracic Society, said it was "heartening" the PM was receiving "standard oxygen treatment" - through his nose or via a face mask - because in more serious cases it would be delivered through mechanical support, such as continuous positive airway pressure, high flow nasal oxygen or more invasive ventilators.

The spokesman said that the mood in government is "determined", and ministers have a very clear plan set out by Johnson for responding to the pandemic.

The prime minister's weekly audience with the Queen will not go ahead, although she will be kept regularly informed about his condition, the spokesman added.

Speaking to BBC Radio 4's Today programme, Gove pledged that if there is any change in his condition "No 10 will ensure the country is updated".