"Coronavirus will not overcome us," the Queen has said, in an Easter message to the nation. 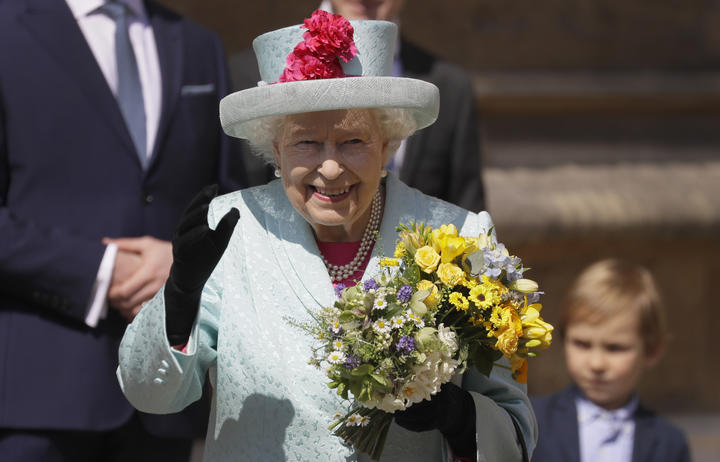 Queen Elizabeth II smiles and waves to members of the public as she leaves after attending the Easter Mattins Service at St. George's Chapel, Windsor Castle on April 21, 2019. Photo: Kirsty Wigglesworth / Pool / AFP

While celebrations would be different for many this year, she said: "We need Easter as much as ever."

Referencing the tradition of lighting candles to mark the occasion, she said: "As dark as death can be - particularly for those suffering with grief - light and life are greater."

It comes as the number of coronavirus deaths in UK hospitals reached 9875.

The Queen speaks of light overcoming darkness, and the hope that Easter symbolises, in a special message recorded to mark the Easter weekend. pic.twitter.com/fTFCOSVBtT

Speaking from Windsor Castle, the Queen said many religions had festivals celebrating light overcoming darkness, which often featured the lighting of candles.

She said: "They seem to speak to every culture, and appeal to people of all faiths, and of none.

"They are lit on birthday cakes and to mark family anniversaries, when we gather happily around a source of light. It unites us."

The monarch, who is head of the Church of England, said: "As darkness falls on the Saturday before Easter Day, many Christians would normally light candles together.

"In church, one light would pass to another, spreading slowly and then more rapidly as more candles are lit. It's a way of showing how the good news of Christ's resurrection has been passed on from the first Easter by every generation until now."

She said the discovery of the risen Christ on the first Easter Day gave his followers new hope and fresh purpose, adding that we could all take heart from this.

Wishing everyone of all faiths and denominations a blessed Easter, she said: "May the living flame of the Easter hope be a steady guide as we face the future."

The Queen, 93, recorded the audio message in the White Drawing Room at Windsor Castle, with one sound engineer in the next room.

The Palace described it as "Her Majesty's contribution to those who are celebrating Easter privately".

It follows a speech on Sunday, in which the monarch delivered a rallying message to the nation.

In it, she said the UK "will succeed" in its fight against the coronavirus pandemic, thanked people for following government rules about staying at home and praised those "coming together to help others".

She also thanked key workers, saying "every hour" of work "brings us closer to a return to more normal times".

Britain has now reported 9875 deaths from the coronavirus pandemic, the fifth highest national number globally. Saturday's increase was the second day running that the number of deaths had increased by more than 900.

Almost 80,000 people in Britain have tested positive for the virus, among them Johnson, who is in the early stages of recovery on a hospital ward after spending three nights in intensive care.

"The message to the prime minister is that we want him to get better and he needs some time and some space to rest, recuperate and recover," Patel said.

"And the whole of cabinet would support that message," she told a news conference in Downing Street.

Johnson's office said on Friday that he was back on his feet and British newspapers reported he was watching films and reading letters sent to him by his fiancee Carrie Symonds, who is pregnant and who herself has suffered Covid-19 symptoms.

The government's main focus in recent days has been trying to ensure Britons comply with stay-home orders and a ban on social gatherings, especially over a sunny Easter weekend.

Police said only a small minority of people were ignoring the message and early data showed officers in England and Wales had issued 1,084 on-the-spot fines so far for people breaking the restrictions. Police powers to enforce came in on March 26 - after the start of lockdown measures