New York state now has more coronavirus cases than any other country outside the US, according to latest figures. 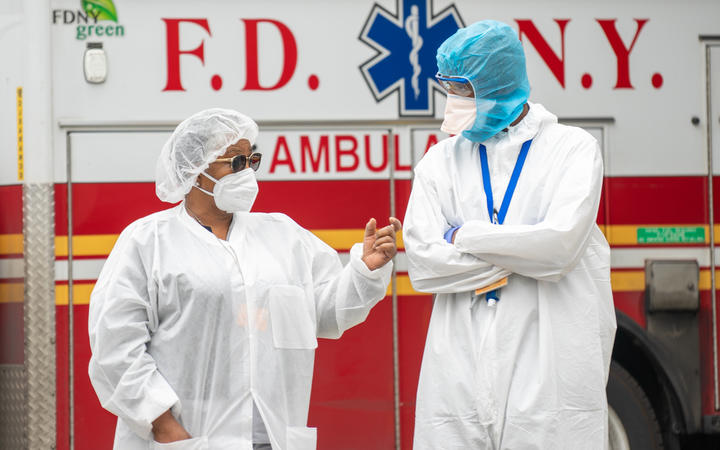 Bronx-Lebanon Hospital Center medical staff speak to each other outside of the emergency room bay in New York City. Photo: AFP

China, where the virus emerged last year, has reported 82,000 cases.

Photos have emerged of workers in hazmat outfits burying coffins in a mass grave in New York City.

Drone footage showed workers using a ladder to descend into the huge pit where the caskets were stacked.

The images were taken at Hart Island, off the Bronx, which has been used for more than 150 years by city officials as a mass burial site for those with no next-of-kin, or families who cannot afford funerals.

Burial operations at the site have ramped up amid the pandemic from one day a week to five days a week, according to the Department of Corrections.

Prisoners from Rikers Island usually do the job, but the rising workload has recently been taken over by contractors.

New York City Mayor Bill de Blasio indicated earlier this week the city's public cemetery might be used for burials during the pandemic.

"Obviously the place we have used historically is Hart Island," he said.

The number of coronavirus deaths in New York state increased to 799 on Wednesday, a record high for a third day.

But Governor Andrew Cuomo took heart from the fact that the number of Covid-19 patients admitted to New York hospitals dropped for a second day, to 200.

He said it was a sign social distancing was working. He called the outbreak a "silent explosion that ripples through society with the same randomness, the same evil that we saw on 9/11".

Another glimmer of hope was heralded on Thursday as official projections for the nationwide death toll were lowered. 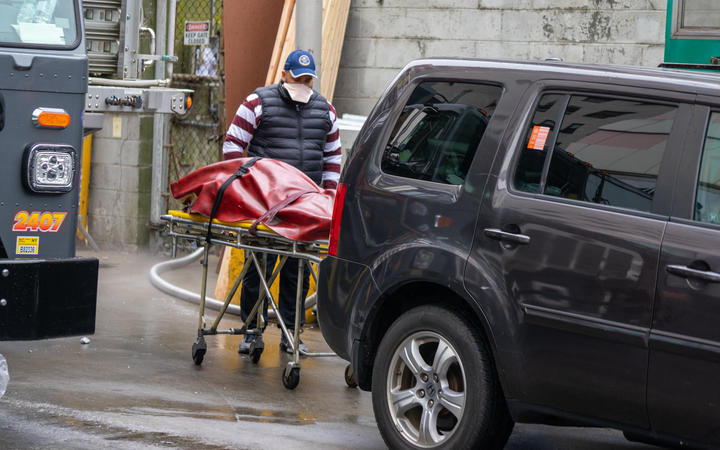 A funeral home employee loads a body to be transported a refrigerated trailer in New York City. Photo: afp

Dr Anthony Fauci, a key member of the White House's coronavirus task force, told NBC News' Today show on Thursday the final number of Americans who will die from Covid-19 in the outbreak "looks more like 60,000".

The 60,000 projection would match the upper estimate for total flu deaths in the US between October 2019 to March 2020, according to government data.

But Vice-President Mike Pence stressed on Thursday that Covid-19 is about three times as contagious as influenza.

The White House has previously touted estimates that 2.2 million Americans could die from coronavirus if nothing was done to stop its spread.

Stay-at-home orders have in the meantime closed non-essential businesses in 42 states, while drastically slowing the US economy.

New data on Thursday showed unemployment claims topped 6 million for the second week in a row, bringing the number of Americans out of work over the last three weeks to 16.8 million.

Chicago meanwhile imposed a curfew on liquor sales from 21:00 local time on Thursday to stop the persistent violation of a ban on large gatherings.

The measure, due to remain in place until 30 April, comes after health officials this week said black Chicagoans account for half of all the Illinois city's coronavirus cases and more than 70% of its deaths, despite making up just 30% of the population.

"We are putting this curfew in place because too many individuals and businesses have been violating the stay-at-home order," said Mayor Lori Lightfoot on Wednesday.

Gun violence in Chicago on Tuesday left seven dead and 14 injured, which city officials said was unforgivable given the virus crisis.

"Every one of those ER beds taken up by a gunshot victim could be somebody's grandmother, somebody with pre-existing conditions, somebody that is in danger of losing their lives because of the pandemic," Supt Charlie Beck said.

He said it had cast a spotlight on inequity and the impact of "structural racism".

The order against "medically unnecessary" procedures was introduced to reserve valuable medical resources for those treating Covid-19 only, the state's Republican attorney general said in March.

But Judge Lee Yaekel, a George W Bush appointee, granted a temporary restraining order against the ban on Thursday.

"As a minimum, this is an undue burden on a woman's right to a previability abortion," he wrote in his ruling.

While there is still no vaccine for Covid-19, America's culture wars have proved similarly incurable.

Legal battles have also ensued over whether guns shops should be closed during the pandemic, and if religious services should be exempt from state orders that ban large gatherings.