In Italy, the government was reported to be considering extending a national lockdown to mid-April as deaths rose to 10,023.

More than 615,600 people have been infected by the novel coronavirus across the world and 28,316 have died, according to a Reuters tally. 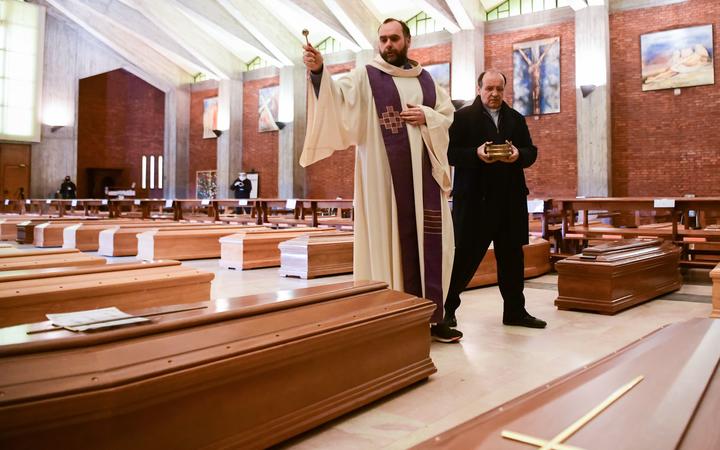 Priest Don Marcello gives a blessing to the coffins of deceased people inside the church of San Giuseppe in Seriate, Italy, on Saturday. Photo: Piero CRUCIATTI / AFP

The number of deaths in the badly hit Italian region of Lombardy rose to close to 6000 as the national government was reported to be considering plans to extend a country-wide lockdown to mid-April.

It increased the death toll in the country by another 889, the second-highest daily tally after Friday's record 969 deaths. Total fatalities in Italy reached 10,023, by far the highest of any country in the world.

Italy has the second highest number of cases, behind the United States.

Spain's death toll rose overnight to 5690, the health ministry said on Saturday, marking a new high in the daily rise in fatalities.

The total number of those infected rose to 72,248.

The United Kingdom will have done well if it comes through the coronavirus crisis with fewer than 20,000 deaths, Stephen Powis, the national medical director of the National Health Service, said on Saturday.

Government figures showed 1019 people had died as of 5pm local time on Friday, while the number of confirmed cases stood at 17,089 on Saturday morning, up 17.5 percent on a day earlier.

A drive-through testing facility for health workers has begun operating in the car park of a popular resort near London as Britain seeks to ramp up testing for those on the frontline of the epidemic.

Germans have been largely compliant with rules to prevent the coronavirus spread, Chancellor Angela Merkel said on Saturday, as her chief of staff said the shutdown would not be eased before 20 April.

The number of confirmed cases in Germany has risen to 48,582 and 325 people have died of the disease, statistics from the Robert Koch Institute for infectious diseases showed on Saturday.

The death toll in Switzerland from coronavirus had climbed to 235 while total cases stand at 13,213, the health ministry said on Saturday, though officials said their worst fears have so far not materialised. The fatalities were up from 197 on Friday, with the number of confirmed infections increasing from 12,161.

Japan's Prime Minister Shinzō Abe promised an unprecedented package of steps to cushion the world's third-biggest economy from the pandemic, saying the country was close to a national emergency as infections surged.

The Chinese city of Wuhan, where the outbreak first emerged, began lifting a two-month lockdown on Saturday by restarting some metro services and reopening borders, allowing some semblance of normality to return and families to reunite.

India said it was planning to turn some railway coaches into isolation wards for coronavirus patients, as authorities scramble to prepare the country's health infrastructure for an expected surge in cases.

Russia will close all border crossings on March 30, the government said on Saturday, tightening restrictions after the country reported its biggest one-day rise in new coronavirus cases. The authorities said they so far had recorded 1264 confirmed cases, an increase of 228 in 24 hours, and ordered that all vehicle, rail and pedestrian checkpoints, as well as the country's maritime borders, be closed from Monday.

The number of known coronavirus US cases soared well past 115,000, with more than 1900 dead, as US President Donald Trump said on Saturday he was considering imposing a quarantine on the hard hit New York region.

New York Governor Andrew Cuomo said on Saturday he was postponing the state's 28 April presidential primary to 23 June as its number of coronavirus cases climbed to 52,318 and deaths to 728.

The US House of Representatives on Friday approved a $2.2 trillion aid package and Trump quickly signed it into law.

Across the US, jails and prisons are reporting an accelerating spread of the new disease, and they are taking a varied approach to protecting the inmates in their charge. Thousands of inmates are being released from detention, in some cases with little or no medical screening to determine if they may be infected by the coronavirus and at risk of spreading it into the community, Reuters found.

Since Sunday, jails have reported 104 staff and 146 inmates with confirmed cases of Covid-19, according to a Reuters survey of cities and counties that run America's 20 largest jails. The numbers are almost certainly an undercount given the fast spread of the virus.

Brazil's President Jair Bolsonaro cast doubt on Sao Paulo's death toll from coronavirus and accused the state governor of manipulating the numbers for political ends, without giving evidence for his claims.

The World Health Organisation says coronavirus has now spread to dozens of countries in Africa, with 2650 infected and 49 dead.

Turkey halted all intercity trains and limited domestic flights on Saturday. The number of cases jumped to 7402, with 108 dead.

Palestinian groups in Gaza cancelled mass rallies planned for next week along the border with Israel amid concerns about the spread of coronavirus in the densely-populated territory, organizers said on Saturday.

Iran started an intercity travel ban, as its death toll rose to 2,378 on Friday.

South Africans struggled to adapt to confinement rules, with many city streets no less crowded than normal as a strict lockdown begun.

Stocks across the globe fell on Friday after a historic three-day run-up, as skittish investors kept indices on track for their worst monthly and quarterly performances since 2008, while the dollar fell by the most in any week since 2009.

Canada said on Friday it will cover 75 percent of wages for small businesses and the central bank cut its key interest rate to the lowest level in a decade.

The European Central Bank chief urged EU leaders to act more decisively as the bloc feuds over how far to go to cushion the economic hit of the pandemic.

Investors rushed into cash and out of bonds at a record pace over the past week, BofA's weekly fund flow data showed on Friday.

Mexico will likely take the longest in Latin America to recover, S&P said on Friday, a day after it cut ratings of Mexico and national oil company Petroleos Mexicanos.