Doctors and nurses on the front lines of the US coronavirus crisis have pleaded for more protective gear and equipment to treat waves of patients expected to overwhelm hospitals as the sum of known US infections climbed well past 100,000, with more than 1600 dead. 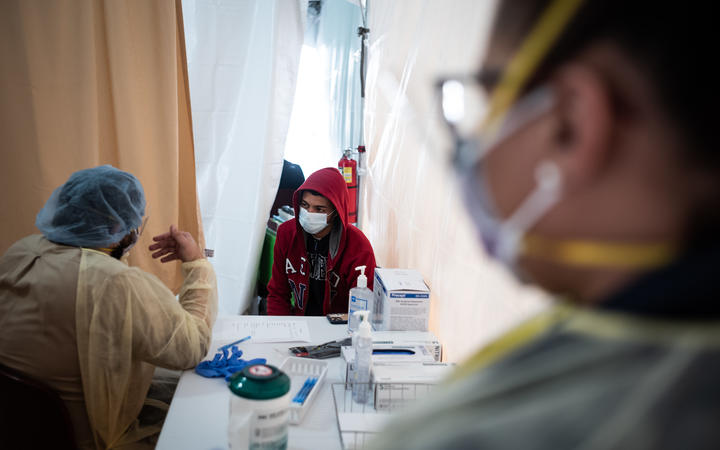 A doctor examines a patient for a Covid-19 test inside a testing tent outside a New York hospital. Photo: AFP

Physicians have called particular attention to a desperate need for additional ventilators, machines that help patients breathe and are widely needed for those suffering from Covid-19, the respiratory ailment caused by the highly contagious novel coronavirus.

Hospitals in New York City, New Orleans, Detroit and other virus hot spots have also sounded the alarm about scarcities of drugs, medical supplies and trained staff while the number of confirmed US cases rose by about 18,000 on Friday, the highest jump in a single day, to more than 103,000.

That tally kept the United States as the world leader in the number of known infections, having surpassed China and Italy on Thursday loca time.

"We are scared," said Dr Arabia Mollette of Brookdale University Hospital and Medical Center in Brooklyn.

"We're trying to fight for everyone else's life, but we also fight for our lives as well, because we're also at the highest risk of exposure."

The United States ranked sixth in death toll among the hardest hit countries, with at least 1632 lives lost as of Friday night, a record daily increase of 370 according to a Reuters tabulation of official data. Worldwide, confirmed cases rose above 593,000 with 27,198 deaths, the Johns Hopkins Coronavirus Resource Center reported.

One emergency room doctor in Michigan, an emerging epicentre of the pandemic, said he was using one paper face mask for an entire shift due to a shortage and that hospitals in the Detroit area would soon run out of ventilators.

"We have hospital systems here in the Detroit area in Michigan who are getting to the end of their supply of ventilators and have to start telling families that they can't save their loved ones because they don't have enough equipment," the physician, Dr Rob Davidson, said in a video posted on Twitter.

Heading in for my night shift in the ER here in #Michigan and while @realDonaldTrump is attacking @GovWhitmer on cable news, I’m still using 1 paper mask/shift because Trump won’t use the #DPANow to get me #PPE. Still not enough tests. #NeveraHoax pic.twitter.com/HhYWWpdd5k

US President Donald Trump on Friday invoked emergency powers to require General Motors Co to start building ventilators after he accused the largest US automaker of "wasting time" during negotiations.

He had previously resisted mounting calls for him to invoke the Defense Production Act, a Korean War-era statute that gives the president broad procurement powers in national emergencies, instead seeking to exert pressure on manufacturers to act voluntarily.

"We are truly a hotbed of Covid-19 here in New Orleans," she said, adding that her hospital was trying to cope in part by shifting some patients to "telehealth" services that allow them to be evaluated from home. 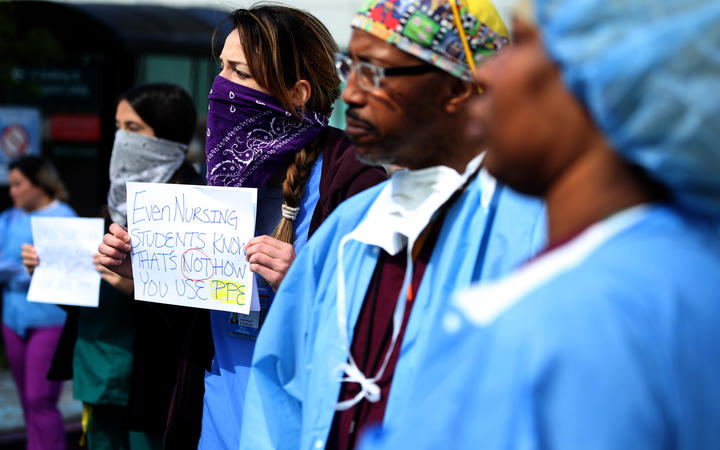 New York-area doctors say they have had to recycle some protective gear, or resort to the black market.

Dr Alexander Salerno of Salerno Medical Associates, a general medical practice with offices in northern New Jersey, described going through a "broker" to pay $US17,000 ($NZ28,145) for masks and other protective equipment that should have cost about $US2500 ($NZ2140), and picking them up at an abandoned warehouse.

"You don't get any names. You get just phone numbers to text," Salerno said. "And so you agree to a term. You wire the money to a bank account. They give you a time and an address to come to."

Nurses at Mount Sinai Hospital in New York said they were locking away or hiding N-95 respirator masks, surgical masks and other supplies that are prone to pilfering if left unattended.

"Masks disappear," nurse Diana Torres said. "We hide it all in drawers in front of the nurses' station."

After days of wrangling, the US Congress passed a $2.2 trillion ($NZ3.64t) relief package on Friday (US time), sending the bill to Trump, who promptly signed it into law.

In addition to aiding hospitals, the package will send cash to businesses and unemployed workers suffering from the effects of stay-at-home orders that have had the side effect of strangling the economy. 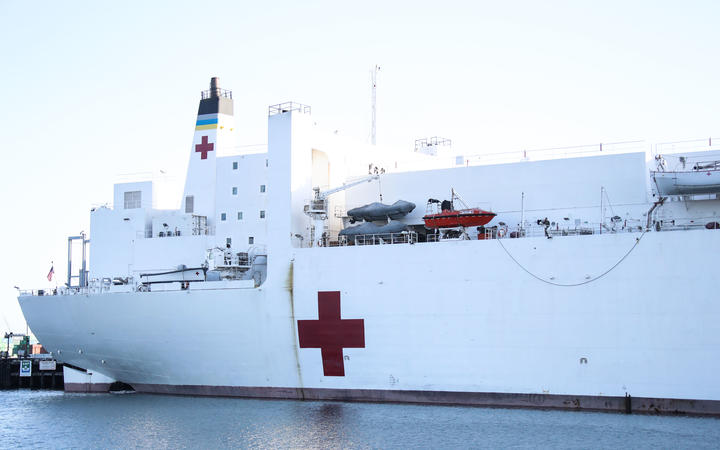 A number of hotels in New York City, including the famed Plaza Hotel, the St. Regis and the Four Seasons, are making rooms available to medical workers fearful of carrying the virus home to their families after work, or to non-critical care patients, New York Governor Andrew Cuomo said.

Marney Gruber, an emergency doctor who works in multiple hospitals around New York City, said commonly used medications were in short supply and hospitals were running out of oxygen tanks.

"These are staples in emergency medicine and ICUs these are your bread and butter, truly, your very basic essentials," Gruber said.

At least two New York medical schools, New York University and Columbia, have said they will graduate their fourth-year students early so they can begin treating patients with the coronavirus right away.

The mayor spoke as he and California's governor, who ordered all coronavirus-related evictions banned through May 31, toured a newly arrived naval hospital ship equipped with 1000 patient beds at the Port of Los Angeles. Its sister vessel is to be deployed to New York's harbour in the near future.

At the Riverside County Fairground east of Los Angeles, California National Guard troops were setting up a 125-bed medical station to serve residents of the Coachella Valley, an area teeming with elderly retirees considered especially vulnerable to Covid-19.

The US military also is setting up field hospitals in Seattle and New York, the Pentagon said.