New data confirms the improvement in air quality over Europe - a byproduct of the coronavirus crisis. 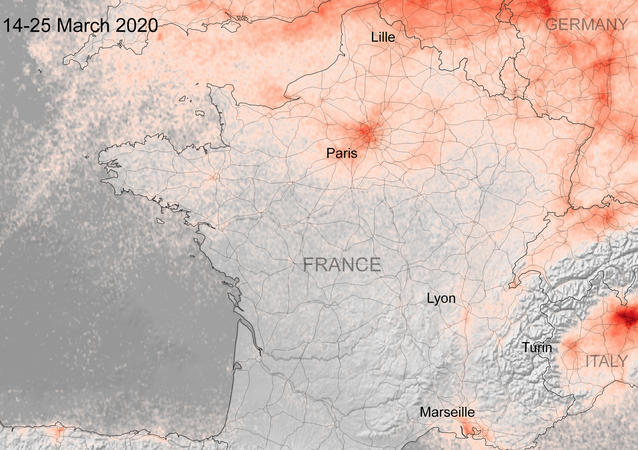 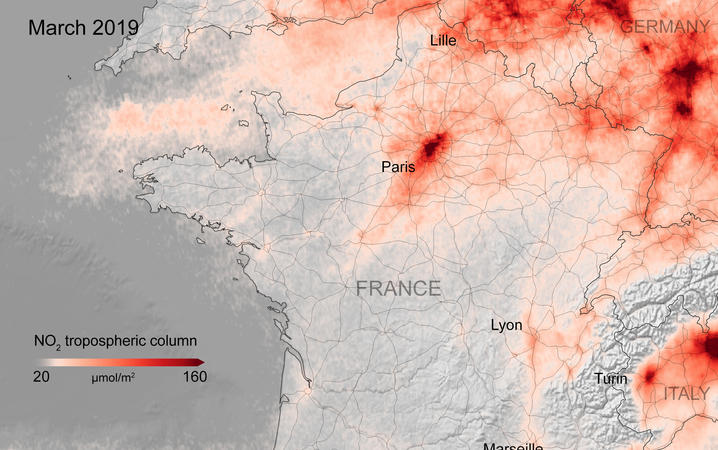 A photo from 2019 of air pollution over France, showing levels before the lockdowns. Photo: AFP

The maps on this page track changes in nitrogen dioxide (NO2) - a pollutant that comes principally from the use of fossil fuels.

Lockdown polices and the resulting reductions in economic activity have seen emissions take a steep dive.

The maps were produced by the Royal Netherlands Meteorological Institute (KNMI).

The Dutch meteorological office leads the Tropomi instrument on the Copernicus Sentinel-5P satellite, which monitors a number of atmospheric gases, including NO2. 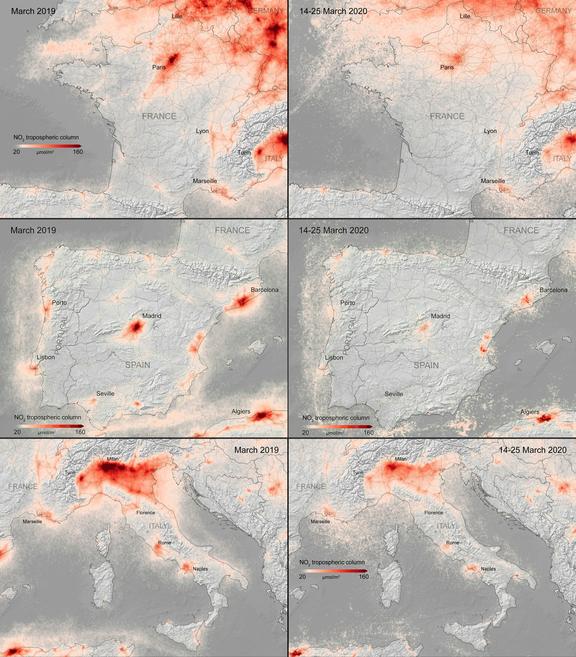 These European Space Agency images were created with data from the Copernicus Sentinel-5P satellite and show the average nitrogen dioxide concentrations over France, Spain and Italy in March 2019 (L) and from March 14 to 25 following Covid-19 lockdowns. Photo: EUROPEAN SPACE AGENCY / AFP

You typically have to take a 10-day average to get a good snapshot, says Henk Eskes from KNMI:

"There's a lot of variability in NO2 from day to day. And that's real variability; it's not a measurement artefact, but it's just due to changes in the weather. So when the wind direction changes, or the wind speed changes, or the stability of the boundary layer changes - you will get different readings."

Combining data for the 10 days irons out much of this variability, enabling us to see the impact of changes due to human activity.

Sentinel-5P (S5P) maps have previously been released of China and Italy. The new one of Italy on this page again shows the marked reductions in the north of the country, where the Covid-19 outbreak has been at its most severe.

There are also new maps here of France and Spain.

Other countries in northern Europe are being closely monitored, including the Netherlands and the United Kingdom - but the KNMI scientists have observed a larger variability owing to changing weather conditions.

The time period to see the dip in concentrations in the UK is also quite short. Britain went into lockdown after some of its Western European neighbours.

New measurements from this week will help to assess the changes in nitrogen dioxide over the UK.

Sentinel-5P is part of the European Union's Copernicus fleet of Earth observers, which are managed by the European Space Agency.

Built by Airbus in Britain, S5P was launched in October 2017.

It carries just the single instrument - Tropomi. This is a spectrometer that observes the reflected sunlight coming up off the Earth, analysing its many different colours.

In so doing, it can detect the presence in the atmosphere of a suite of trace gases such as nitrogen dioxide, ozone, formaldehyde, sulphur dioxide, methane, carbon monoxide and aerosols (small droplets and particles).

Scientists will combine S5P's data with a suite of atmospheric and transport models to fully understand the observations.

"For China, I think we have now very solid results, and that's in part because we have a long period already. And we have first indications of a recovery as people in China are starting to go back to work. We will closely follow the development to see if NO2 concentrations will return to pre-coronavirus levels," Eske said.