The Western Australian branch of the RSL has banned the the performance of Welcome to Country ceremonies and the flying of the Aboriginal flag at all of its Anzac and Remembrance Day services.

The Aboriginal flag will not feature at Anzac Day ceremonies in Western Australia this year. Instead, only flags from WA, Australia and New Zealand will be allowed. Photo: YouTube/ Harold Thomas

"While having utmost respect for the traditional owners of land upon which such sites and memorials are located, RSLWA does not view it appropriate that a Welcome to Country is used at sites that were specifically established to pay homage to those who died and who came from a wide range of cultural backgrounds," the policy states.

The new policy was developed after the Anzac dawn service in Fremantle last year, where Aboriginal elder Professor Len Collard read the ode in Noongar language.

Professor Collard, who has spent much of his career preserving Noongar language, translated the ode from English.

RSLWA chief executive John McCourt said some of his members told the board that this was not appropriate. 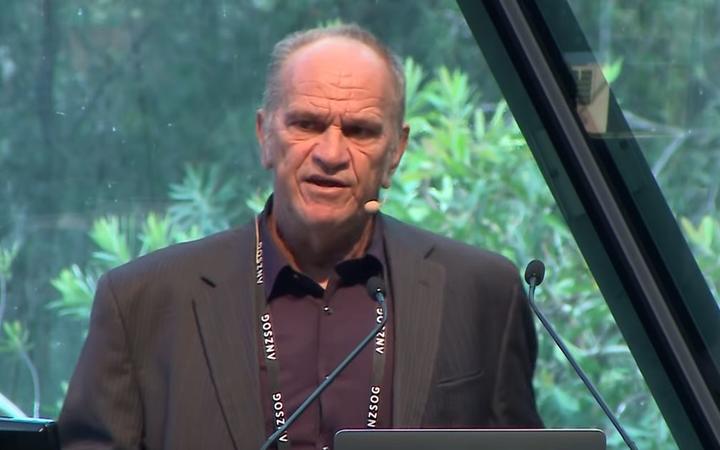 In response, the board developed a new policy around RSLWA-conducted commemorations of Anzac and Remembrance Days.

McCourt acknowledged these policies were not enforceable, but he said the board could withdraw its support for an Anzac or Remembrance Day ceremony if it did not comply with the RSLWA policies.

He said these strict conditions only related to services on these specific days.

"All the RSL is asking for is two days," he said.

The policy states the RSLWA "remains appalled" at the discrimination suffered by Aboriginal people after they returned from World War I.

But it notes there has been a trend in recent years to add cultural elements to commemoration ceremonies.

"While it is important to recognise cultural and ethnic contributions to the defence of Australia, it is also important to maintain Anzac Day and Remembrance Day as occasions to express unity, a time when all Australians - irrespective of race, culture or religion - come together to remember and reflect," it says.

National RSL president Greg Melick said it was up to each state branch to represent the views of their own members.

But he said the national RSL was very happy that there was Indigenous representation at the National War Memorial event on Anzac Day, which included an annual opening of the service with a didgeridoo performance.

RSL Queensland said it would continue to honour Indigenous veterans at its commemorative services, saying their contribution must not be forgotten.

'Slap in the face' to Indigenous soldiers

Gary Oakley, president of the Aboriginal and Torres Strait Islander Veterans and Services Association of Australia, said the policy was draconian.

"I thought it was behind the times," he said.

"If you look at the rest of Australia and what happens at Anzac days around Australia, I just think that they're barking up the wrong tree, to be honest."

"As an Indigenous person, I think it's a bit of a slap in the face to us because this is our country," he said.

"We've been protecting country for 60,000-plus years and we fought two world wars as non-citizens, illegally, and yet we volunteered to fight for this country.

"We kind of have the right to be [represented] in these Anzac Day ceremonies.

"I don't understand where they're actually coming from. It's like old-school thinking, something from the 30s or the 40s."

WA Treasurer and Yamatji man Ben Wyatt criticised the decision as "regrettable and divisive" in a tweet posted this morning, calling on the RSL to immediately rethink the move.

This is a regrettable and divisive decision by RSLWA and I suggest they reconsider. Immediately.

It is worth noting that our New Zealand partners embrace the language of their Indigenous peoples at ANZAC DAY ceremonies.

We should do the same.

"It is worth noting that our New Zealand partners embrace the language of their Indigenous peoples at Anzac Day ceremonies," he said.

"We should do the same."

"After being a part of ANZAC ceremonies last year and being invited to play the boomerangs at the dawn service with my cousin, I thought it was a great step towards RSL Broome and the Defence Force in Broome taking a step forward in reconciliation," he said.

"They [the RSLWA] say that they try to respect all cultures and so on, but then only saying everything can be done in English, that's conflicting itself.

"It's something I think our kids shouldn't be seeing and shouldn't be part of, because we're moving towards an inclusive and embracing society more and more, and then we have this sort of setback, it's ridiculous."

"This recognition has occurred for many years and has added something extra special to the occasion," he wrote in a tweet.

"It should be allowed to continue."

"I think it is out of step with the general community approach and the long hard road to reconciliation across this country," he said.

"The fundamental thing that I want to address in this decision by the RSL is the notion that all cultures, and the Noongar or the Aboriginal culture, is somehow just part of the multicultural excerpt of this country - it just is fundamentally not true.

"I think as First Nation Australians, they deserve the respect and a special place in the commemoration. They are a very special connection for all of us to have to our land, to our culture, to our heritage."

Greens WA Senator Rachel Siewart said the move was offensive and hurtful and should be reversed.

"Many First Nations peoples have served this country in the armed services and this move by the RSL is deeply offensive to their memories and not in the Anzac spirit," she said.