A huge dust storm has swept through Dubbo, in New South Wales' central west, with wind gusts of over 100 km/hr while Melbourne was struck by lightning and golfball-sized hailstones. 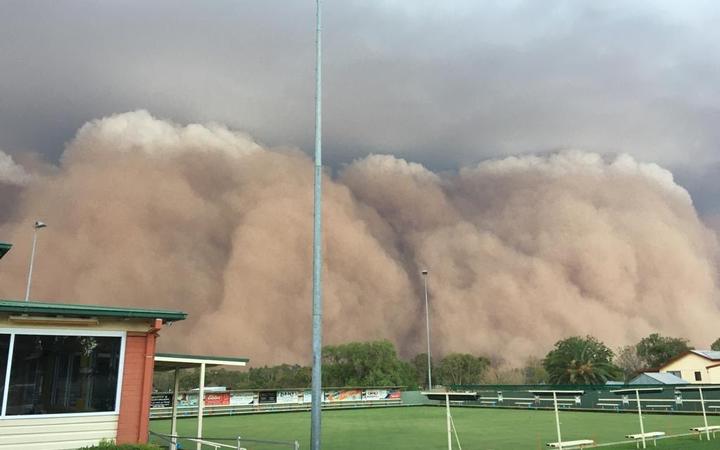 Drought and thunderstorms were a factor in the dust storm that enveloped the city of Dubbo, the Bureau of Meteorology says. Photo: Twitter / @meter_geek

After sweeping through Dubbo last night, the storm continued towards Parkes before moving to the central ranges, affecting multiple communities.

Jordan Notara from the Bureau of Meteorology said dry conditions exacerbated the storm.

"Drought conditions through the Central West Slopes and Plains have been very heightened … that again, coupled with some severe thunderstorms in the area yesterday afternoon, did see dust fly into the air as we saw those gust fronts occur from those storms."

Hope this is the LAST dust storm for this drought, Dubbo tonight. pic.twitter.com/BqDc4KyXOT

Nyngan‘s Grace Behsman took this video of a huge dust storm rolling in as they approached town. Watch til end - scary moment when the storm overtakes and everything goes black. The dust storm has swept the west & is encroaching Dubbo. Remember: not everyone’s celebrating rain pic.twitter.com/5VMLrFbrrT

Melbourne was struck by lightning, rain, flash flooding, golf ball-sized hail and fire overnight as a severe thunderstorm made its way over much of the state.

Sheridan said he expected more calls to come through as people woke up to the damage.

The majority of the calls concerned flooding and roof damage caused by hail smashing roof tiles and skylights.

There were about 250 callouts for fallen trees, and four people across the state had to be rescued when they drove into floodwaters.

And if you still do not agree with #ClimateEmergency , this is #Melbourne today .Severe hailstorm as huge size of golf balls . Never seen anything quite like it
#melbweather pic.twitter.com/AYuF4gpesI

The state also experienced sporadic power outages but there was no major impact on infrastructure.

Meanwhile, hail as big as golf balls and ferocious winds of up to 116 kilometres per hour tore through Canberra in a storm that had residents running for cover.

More than 1000 homes lost power across the territory.

Since midday, the ESA received more than 620 requests for assistance, with ACT Ambulance Service attending to two people for minor injuries sustained during the storm.

The Bureau of Meteorology had issued a warning for "damaging, locally destructive winds, large, possible giant hailstones and heavy rainfall" due to hit the ACT at about 12:30pm, and advised residents to move cars undercover and stay indoors.

The BOM later reported wind gusts of 116 kilometres per hour.

Hilary Wardnaugh, who was at the National Library of Australia when the hail started to fall, described it as an "unbelievable" sight.

"My friend and I were going to go outside and have our lunch and then we came out and saw it was raining and then the hail started," she said.

"It was like Armageddon, basically. Unbelievable. There were people running into the library but I'm really hoping that there's no one was caught out in it."

She said the hail destroyed a number of vehicles at the library, as well as damaging trees.

"It really only lasted 10 minutes and the amount of damage that it caused was truly unbelievable," she said.

"There are bits of plastic and glass everywhere and it's obviously hit the trees as well because there are branches and leaves everywhere.

"Some people are quite distraught, obviously, that their cars are so damaged but I haven't seen anyone who has been hurt which is good, so I think everyone is just trying to comprehend."

Omeo received 38 millimetres of rain overnight and the Mount Buffalo Chalet received 29mm, but most other fire-affected areas missed out.

A severe weather warning remains in place today for heavy rain and flash flooding in Gippsland and south-west Victoria.

Peak falls of up to 100mm are possible in West and South Gippsland and there is a flood watch for fire-affected areas in north-east Victoria and East Gippsland.

The Bureau of Meteorology said a spike in fire danger would arrive on Wednesday when northerly winds increase across most of Victoria.

Despite the torrential rain weather, an emergency warning was issued about 9:30pm last night for an out-of-control bushfire at Pastoria and Pipers Creek, north of Melbourne.

An emergency warning was also issued for Lancefield and Newham, but both were downgraded to an advice warning by 10:45pm.