President Donald Trump sought on Sunday to assure American farmers and ranchers hit by a protracted tariff war with China that a trade agreement he signed with Beijing will lead to major purchases of US agricultural products. 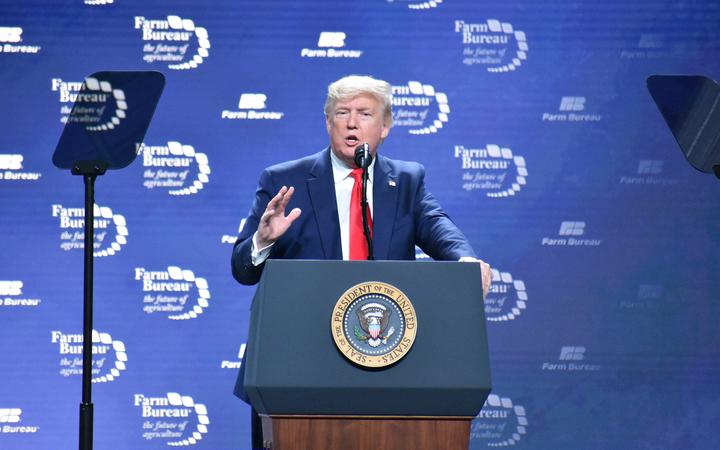 Trump's remarks in Texas today, a state he won in 2016 and will need again in November's election, had all the hallmarks of a political stump speech, with a slam at Democrats trying to remove him through impeachment and a wish he could wear a cowboy hat in Washington.

He began his remarks to the annual American Farm Bureau Federation convention in Austin by waving a copy of a Farm Journal poll that said he had wide support among farmers and ranchers.

Trump said the initial trade deal he signed with China last Thursday would be a boon for farmers, whom he thanked for sticking with him after he twice had to allocate multibillion-dollar bailouts for producers targeted by Chinese tariffs.

"You stayed in the fight," said Trump. "You were always with me. You never even thought of giving up and we got it done."

His Senate impeachment trial is set to begin in earnest on Wednesday.

"By these radical-left lunatics I get impeached. But that's OK, the farmers are sticking with Trump," he said.

The Phase 1 trade deal with China was meant to reduce tensions after 18 months of a tit-for-tat tariff war between the world's two largest economies that has hit global growth.

Analysts have said a number of issues remain unresolved. The Phase 1 agreement will leave in place 25 percent tariffs on US$250 billion of Chinese industrial goods and components used by US manufacturers, and China's retaliatory tariffs on over US$100 billion in US goods.

Trump told the farmers he would vigourously enforce the trade deal to make sure China holds up its side of the agreement.

"I think it's going to work out and I think China is going all out to prove that the agreement that we signed is a good agreement," he said.

Trump also reminded the farmers that he had gained passage by Congress of a new trade deal among the United States, Mexico and Canada that will replace the 1994 North American Free Trade Agreement. He said he would sign the deal soon, probably in a White House ceremony.