Negotiations between the French government and trade unions failed to break the deadlock over pension reform on Friday as both sides stood firm ahead of a fifth day of nationwide protests. 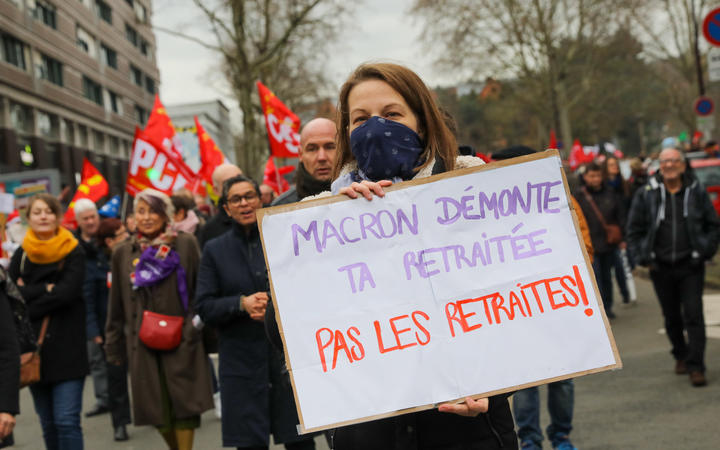 With a public transport strike into its 37th day, President Emmanuel Macron's centrist government defied unions on Friday with a draft pension reform bill that included a contested clause on raising the retirement age by two years to 64.

Prime Minister Edouard Philippe says the reform must result in a balanced pension budget and that raising the retirement age is the best way to achieve this. France spends the equivalent of 14 percent of GDP on pension payments.

The government stand has infuriated the unions, including the reform-minded union CFDT - France's largest - which on Friday rejected the government's offer of further talks if in the meantime parliament begins debating the bill.

"We will take part in these talks on one condition: that the outcome is not fixed from the start," CFDT boss Laurent Berger told reporters.

Philippe's government has promised to include any alternative solutions as amendments.

Unlike the hardline CGT, the CFDT union agrees with the core principle of the government's proposal, which is to replace France's 42 pension systems and different retirement ages with a universal points-based system with the same rights for everyone.

But the CFDT rejects increasing the retirement age, which it says is "blind and unjust".

For Macron, winning over the CFDT is crucial in breaking the united union front against his reform, as the CGT and other hardline unions want the reform bill withdrawn altogether.

After meeting union leaders on Friday, Philippe said he would send written concrete proposals to unions but he gave no indication of where the government might yield.

The reform bill - which parliament is due to debate from mid-February - proposes to progressively raise the age at which workers can retire on a full pension to 64 "for the 1965 generation who will retire from 2027".

The legal retirement age will remain 62 but workers who leave at that point will not receive their maximum pension.

"We could not have a text that is silent on the age (for a balanced pension budget)," Laurent Pietraszewski, secretary of state for pensions, told Reuters. "It is at the heart of the reform."

Macron has already stared down the unions over reform of the state-run SNCF railways and French labour laws and is now holding his ground once again.

But early last year, he made concessions worth 17 billion euros to quell months of often violent "yellow vest" protests against the high cost of living and elitism that posed the severest challenge yet to his authority.