By Elizabeth Pineau and Sophie Louet

French trade unions disrupted rail services, cut power output and brought demonstrators onto the streets in cities across France on Thursday in a make-or-break push to force President Emmanuel Macron to abandon his planned pension reform. 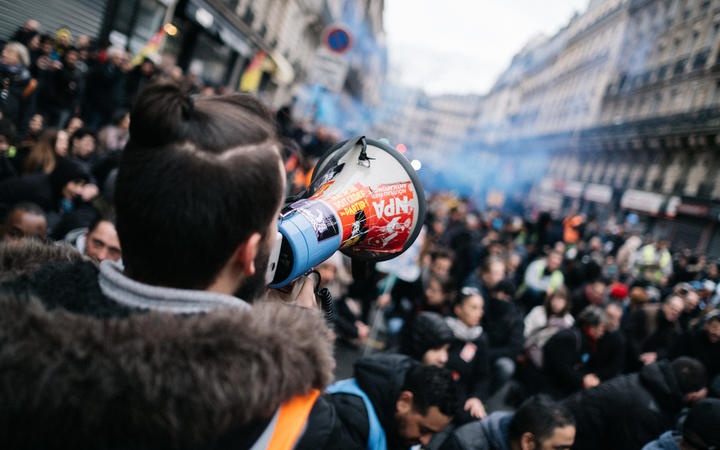 Police fired teargas at protesters in Nantes, western France, and in Paris, where demonstrators hurled projectiles at officers in brief skirmishes and trailed smoke flares.

"Nothing is lost. The ball is in the government's camp. Either they listen, or they govern against the people's will," hardline CGT union boss Philippe Martinez told reporters. "I am sceptical about the government's willingness to talk."

Former investment banker Macron wants to streamline France's unwieldy pension system and incentivise the French to stay in work longer to pay for some of the most generous retirement benefits in the industrialised world.

The proposed reform would be the biggest overhaul of the system since World War Two and is central to the president's drive to make the French labour force more flexible and more competitive globally.

He says the myriad special benefits handed out to different types of worker deter mobility within the job market, especially within the public sector.

If Macron succeeds in defeating the unions - he has already stared them down over reform of state-run SNCF railways and an easing of labour laws - he will strengthen his hand to embark on further pro-business reforms as he eyes re-election in 2022.

The strike has hit transport in Paris the hardest and commuters on Thursday again grappled with skeleton services on suburban and metro lines. Power sector walkouts saw electricity production fall by about a 10th.

Rail workers and teachers, lawyers and nurses railed against a president they accuse of turning a deaf ear to the street. Some waved banners reading "Day 36 and we aren't giving up"; others collected donations to help compensate striking workers for lost salaries.

French employees receive pensions through a system divided into dozens of separate schemes. Macron wants a single "points" system to treat contributions from all workers from the public and private sectors equally.

Public sector unions argue this amounts to an attack on hard-earned benefits that help compensate for salaries below those in the private sector.

"This reform would herald the end of public services in France," lamented teacher Antoine Rouilly in the southwestern city of Toulouse. "If there are no retirement perks, there's no reason to stay in the public sector."

While the strikes are the longest running in decades, they have failed to paralyse France in the way achieved by a wave of industrial action in 1995 that forced a government U-turn from which the prime minister never recovered.

Nonetheless, in the first pointer on the strike's impact economic sentiment, consumer confidence fell sharply in December and retailers, hoteliers and restaurateurs complain of a sharp fall in revenue.

The government's strategy is to pick off individual sectors with bespoke concessions, raising questions over prospects for ending up with a single system, and seek a compromise with the reform-minded CFDT union.

The CFDT opposes the government's plan to financially penalise people who stop working before 64, two years later than the legal retirement age. Winning the CFDT's support is key to the government ending the stalemate.

Lawmakers close to Macron have suggested the extended retirement age could be a temporary measure if another way of balancing the pension budget can be balanced.