Firefighters are bracing for a difficult night ahead with blazes in New South Wales' south set to join into a 'mega-fire' that has razed over half a million hectares of land. 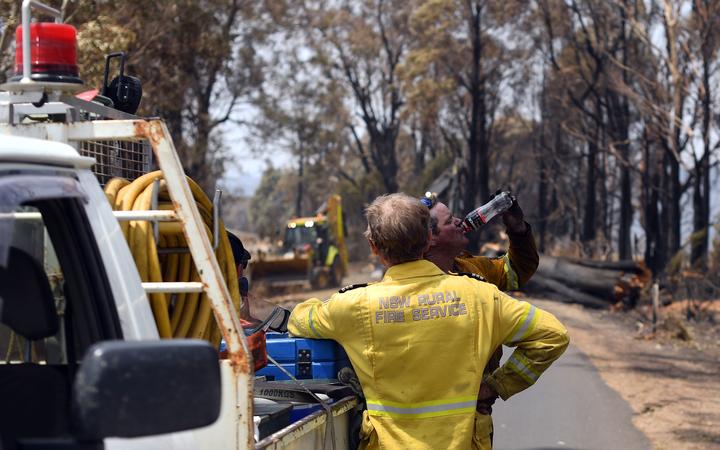 Sunset will both benefit and hamper firefighting efforts in the south of the state, with cooler evening temperatures reducing the severity of conditions, however many aircraft will be unable to operate after dark.

State-wide, the late southerly change is set to bring winds gusting up to 90km/h in some areas challenging the 2600 firefighters battling more than 130 fires in NSW today.

"Everywhere south of Tumut, all the way down through Kosciuszko, and you have got places like our alpine resorts - Thredbo, Perisher, Guthega," he said.

Five out-of-control blazes are at watch and act in the south of the state, including large blazes at Dunns Road and Green Valley which are threatening to join forces, as well as the Adaminaby Complex fire.

Elsewhere, the RFS has issued an emergency warning for the 600-hectare Yearinan Station Road fire burning north-east of Coonabarabran, about 150km north of Dubbo in Warrumbungle shire.

People in the area of Dandry Road, Tandarra and Galaxy Estate have been told it is too late to leave.

Total fire bans are in place for 10 NSW regions.

On top of the "extreme" rating in the Southern Slopes, the fire danger is rated severe across the Monaro Alpine, Southern Ranges and Eastern Riverina.

Most other regions across the state have a very high fire danger.

However, authorities do not expect conditions to be as bad as those the state experienced last Saturday when dozens of properties were destroyed across NSW.

As at 3pm local time, temperatures in some parts of the state soared past 40 degrees Celsius.

A Severe Weather Warning has been updated for New South Wales for damaging winds for people in coastal parts of the Metropolitan and Illawarra, and SW inland of NSW. Winds averaging 55-65kmh may gust to 90kmh. Prepare your property and monitor conditions. https://t.co/8iYCxKlr0q pic.twitter.com/Hq91nXqrth

Smoke from fires in SE NSW is beginning to increase with hot temperatures, stronger winds and lower humidity. For the latest information on the fires refer to the NSW RFS: https://t.co/aEcKnTbW8R pic.twitter.com/pryyzgt6Mj

"At the point where those two winds mix is where we get some significant and erratic fire behaviour and once the southerly comes through very late in the evening tomorrow night, that will actually introduce a third wind into the mix which will make it even more erratic and obviously the wind speed with that will also be a concern," he said.

Firefighters across the state took advantage of cooler weather over the past few days to strengthen containment lines ahead of today.

However, increased humidity and rain across some fire grounds hampered some backburning activity.

An insight into the work that police and emergency services are doing to assist communities in bushfire-affected areas. #NSWFires pic.twitter.com/Q5lBgIJ8tG

Authorities have confirmed that 1995 NSW homes have been destroyed since the start of the fire season, with another 816 damaged.

The NSW Government yesterday announced it would commit an extra $1 billion to help rebuild bushfire-ravaged communities.

It comes on top of more than $200 million already committed by the state government, and a $2b national fund provided by the Federal Government.