A fast-moving bushfire that has triggered an emergency warning across Perth's south-eastern suburbs in Australia is being fanned by wind gusts, with almost 200 firefighters set to work through the night to try to stop it heading towards more densely populated areas. 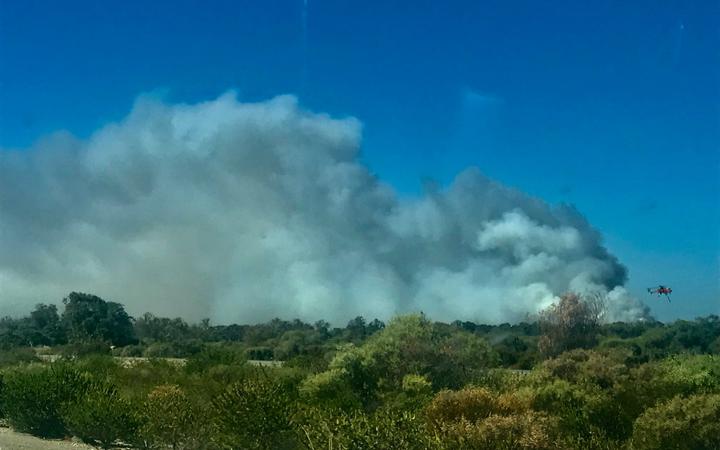 A photo of the fire taken yesterday. On the right the Georgia Peach air crane leased from the US can be seen helping to fight the fire. Photo: Facebook / Department of Fire and Emergency Services

The bushfire has destroyed one shed and flames came right up to the edge of several buildings. It has burned through 1000 hectares within four hours after starting near the Kwinana Freeway in Baldivis.

An emergency warning is in place across the suburbs of Baldivis, Mardella, Hopeland, Wellard, Casuarina and Oldbury, but the Freeway remains open.

People in this area are being told they are in danger and need to act immediately to survive.

Fire authorities say there is a threat to lives and homes and people in that area should leave if the way is clear.

The bushfire is out of control and unpredictable, and moving fast in a north-easterly direction.

Authorities say homes in Mundijong Road are now under threat.

Parts of Baldivis west of the freeway, Casuarina, Wellard and Oakford have been placed on a watch and act alert.

A temporary evacuation centre has been set up at the Mike Barnett Sports Complex on the corner of Dixon Road and Goddard Street in Rockingham.

The fire began about midday yesterday in scrubland east of the Kwinana Freeway, near the Karnup Road interchange, in Baldivis.

Department of Fire and Emergency Services (DFES) Superintendent Ray Buchan said the fast-moving fire had been travelling about 2.5 kilometres per hour and there was spotting 300 to 400 metres ahead of the fire.

"There was significant spotting ahead of the fire and so the crews were effectively chasing the fire and just trying to get in front as the fire was coming into properties," he said.

Crews would work through the night to try to stop a worst-case scenario of the fire reaching the southern metropolitan areas of Byford and Southern River.

"We're working hard to try and stop the fire going into the Byford townsite, which is by no means at the moment under threat, but that's where it's potentially heading," he said.

Strong winds would ease only a little overnight but should drop early today.

The total area on alert covers a huge area of Perth's south-east, expanding almost 25 kilometres from the ignition point in Baldivis to as far as Byford.

It is burning through paddocks and rural properties, including a horse riding school where several panicked horses could be seen in helicopter footage.

It has also jumped the Serpentine River.

A total of 180 firefighters, 60 fire trucks, three fixed-wing water bombers and five helicopters are fighting the fire, including the large Georgia Peach air crane leased from the US.

"We have a lot of dry grass in the area," he said.

"With this wind and the fuel that we've got here, if you have a look around there a lot of growth in this area."