A group of Amazon employees has said the company has threatened to fire some of them for speaking out on environmental issues. 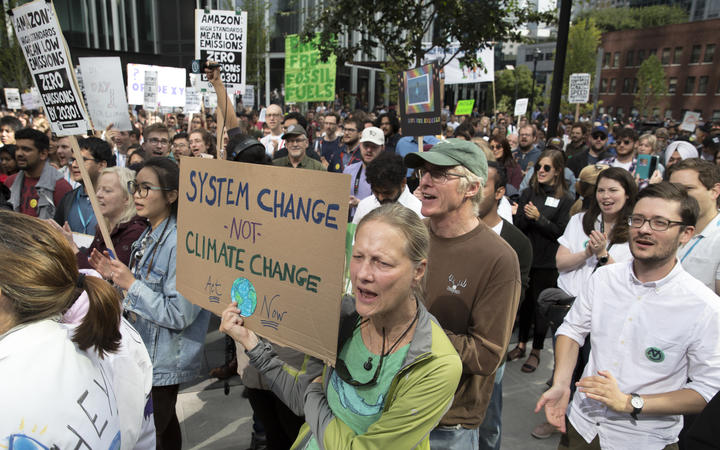 Amazon Employees for Climate Justice lead a walk out and rally at the company's headquarters to demand that leaders take action on climate change in Seattle, Washington on September 20, 2019. Photo: AFP

Amazon Employees for Climate Justice said the workers were told they were in violation of company policies.

It comes after employees joined calls for the e-commerce giant to do more to tackle climate change.

The company said its policy on employees making public comments is not new and covers all of its workers.

In a Twitter post, the group said some employees had been contacted by Amazon's legal and human resources teams and questioned about public comments they had made.

The statement went on to say: "Some workers then received follow-up emails threatening termination if they continue to speak about Amazon's business."

We must be able to speak up. Here is our press response to Amazon’s intimidation tactics. 3/ pic.twitter.com/7DqhCw09Yf

Amazon told the BBC the rules were not new, adding: "We recently updated the policy and related approval process to make it easier for employees to participate in external activities such as speeches, media interviews, and use of the company's logo."

It continued: "As with any company policy, employees may receive a notification from our HR team if we learn of an instance where a policy is not being followed."

Amazon Employees for Climate Justice is a group of the company's workers "who believe it's our responsibility to ensure our business models don't contribute to the climate crisis".

The group has called on Amazon to achieve zero emissions by 2030, limit its work with fossil fuel companies, and stop funding for politicians and lobbyists who deny the existence of climate change.

Amazon, like many other big companies, has faced increasing pressure from both the public and its own workers to take bolder steps to address its impact on the environment.

In May, thousands of Amazon employees used the company's annual shareholders meeting to call on chief executive Jeff Bezos to formulate a broad climate change initiative for the business.

That proposal was rejected by shareholders. But the following September, Bezos announced plans for the company to be completely powered by renewable energy by 2030 and have net zero carbon emissions by 2040.

The day after that announcement, more than 1000 workers left their desks to join the Global Climate Strike, as well as protesting against Amazon's environmental policies.