Amazon chief executive Jeff Bezos has pledged to make the company carbon neutral and meet the goals of the Paris climate agreement by 2040. 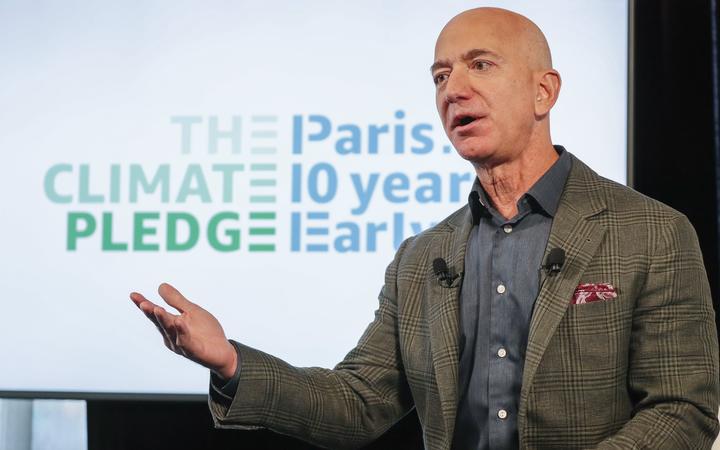 Amazon chief executive Jeff Bezos announces the launch of a climate pledge for businesses, at an event in Washington. Photo: AFP

More than 15,000 Amazon employees have pledged to stage a "walkout" protest against the company's environmental record, on Friday (US time).

It will be the first walkout by staff at Amazon's Seattle headquarters.

Organisers have welcomed Mr Bezos's promise but say it does not go far enough.

Amazon’s Climate Pledge is a huge win for @AMZNforClimate & we’re thrilled at what workers have achieved in under a year. But we know it’s not enough. The Paris Agreement, by itself, won’t get us to a livable world. Today, we celebrate. Tomorrow, we’ll be in the streets. pic.twitter.com/vTMzGKahTR

At a press conference in Washington DC, he announced the launch of a climate pledge any company can sign up to.

Its aim is to meet the targets set out in the Paris agreement by 2040, 10 years earlier than specified.

To meet its pledge, Amazon said it had ordered 100,000 electric delivery vehicles to reduce its fuel consumption. The first will enter service in 2021.

According to the International Energy Agency, data centres were responsible for about 1 percent of the world's energy use in 2018. Demand for cloud computing is expected to increase.

Mr Bezos said 40 percent of the energy Amazon used was currently from renewable sources but this would rise to 100 percent by 2030.

Amazon will also invest $US100 million ($NZ158m) to restore forests and wetlands.

"We want to use our scope and our scale to lead the way," said Mr Bezos in a press statement.

In June 2017, the Trump administration said the United States would withdraw from the Paris climate accord.

But Amazon said it would meet the targets set out in the agreement 10 years "ahead of schedule".

In July, thousands of Amazon workers staged protests about pay and working conditions at the online retail giant.

The disruption was timed to coincide with Prime Day, when Amazon offers discounts and promotions.