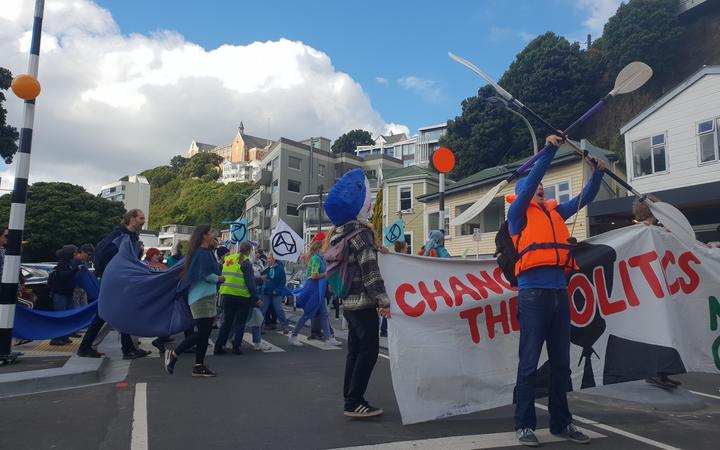 It follows a week of action globally, including major protests in London where more than 600 people were arrested.

In Auckland, about 40 protesters gathered and donned high-vis wear to block the main Mission Bay intersection along the busy waterfront area at about midday.

"Extinction Rebellion is a rebellion against the government. It is saying you are not taking care of us, you are not looking after us. That is the role of government and we want government action to tell the truth, and say 'hey we're in a climate crisis now', and to declare a climate emergency."

Carrying three large banners the group stopped traffic intermittently for about an hour, to the irritation of some motorists.

"It is disruptive, but this is the point," Ms Dempsey said.

"We've got to act globally - you've seen what's happening in London, we've got to disrupt the way society is working to get the message across to people as well as to the government.

"There's going to have to be a drastic restructuring of the economy and the way society works. It's not our undertaking to tell the government exactly what they should be doing. Our job is to say you have got the experts at hand, they will tell you what you need to do..."

Fellow protester Chris Huriwai said it was great to see people getting active for an issue that really mattered.

However despite the protesters' enthusiasm, some of those who encountered the groups were exasperated to find their way blocked.

"I agree with the message but I think the way they're going about delivering it is not right," one motorist, Trevor, told RNZ.

"There are only about five or ten cars in each direction that can hear what they're saying. I've come from Okahu Bay and the traffic is backed up all the way to there. When those people get here they're going to be really angry and they're not going to listen to any of this, they're just going to want to get through.

"I've been sitting here for 10 minutes. I've got the message, now I'm just getting cross. I don't hear anyone behind me cheering."

Several cars attempted to push their way through, including one man who ordered he be let through as he had a sick child.

"I agree with their views but this is the wrong way to go about it. They're going to irritate everyone and people who haven't made their mind up about it are going to be put off I think." 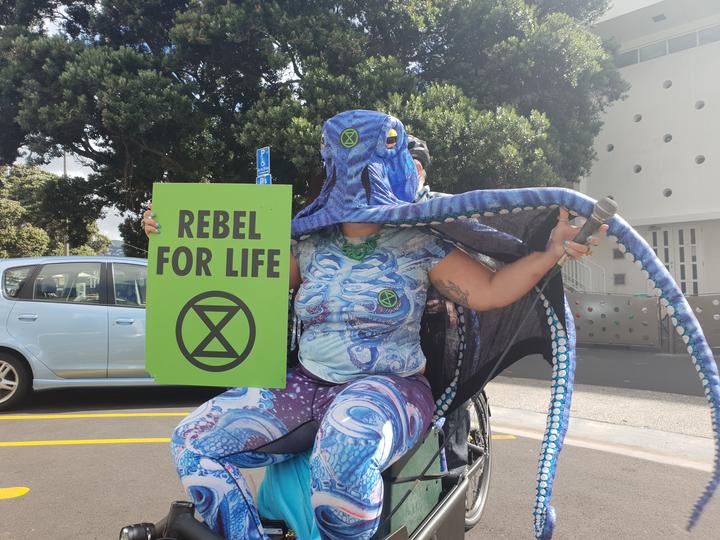 Dr Sea Rotmann, who was dressed as a kraken, was protesting in Wellington. Photo: RNZ / Charlie Dreaver

In Wellington about 50 people dressed in blue or as sea animals gathered to protest sea level rise.

The group blocked traffic on zebra crossings along Oriental Parade.

Once on the crossing they chanted slogans such as "System change, not climate change!" and made a human wave using blue pieces of fabric.

Media spokesperson Dr Sea Rotmann, who was dressed as a kraken, said Oriental Parade was an iconic place to begin the human wave.

"We're handing out leaflets that apologise for the inconvenience, and handing out hot cross buns with the Extinction Rebellion symbol on them to honour Easter and the Easter traffic.

"We think this minor disruption is nothing compared to what we are facing very very soon," she said.

A police spokesperson said they were unaware of any arrests from today's protests.