Myanmar's leader Aung San Suu Kyi has defended her country against allegations of genocide at the UN International Court of Justice (ICJ). 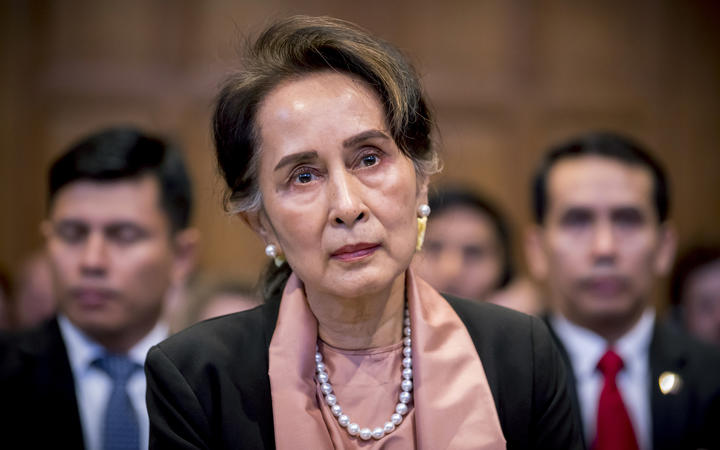 In her opening remarks, she called the case against Myanmar "incomplete and incorrect".

She said troubles in Rakhine, where many Rohingya lived, go back centuries.

Thousands of Rohingya were killed and more than 700,000 fled to neighbouring Bangladesh during an army crackdown in Buddhist-majority Myanmar in 2017.

Myanmar has always insisted it was tackling an extremist threat in Rakhine state, and Ms Suu Kyi maintained that stance, describing the violence as an "internal armed conflict" triggered by Rohingya militant attacks on government security posts.

Conceding that Myanmar's military might have used disproportionate force at times, she said that if soldiers had committed war crimes "they will be prosecuted".

Ms Suu Kyi - once celebrated internationally as a champion of democracy - has been de facto leader of Myanmar since April 2016, before the alleged genocide began. She does not have control over the army, but has been accused by the UN investigator of "complicity" in the military clearances.

Ms Suu Kyi has chosen to stand up for the same army that kept her under house arrest for years.

She told the court her country was committed to the safe repatriation of people displaced from Rakhine, and urged the court to avoid any action that could aggravate the conflict.

What was the reaction? 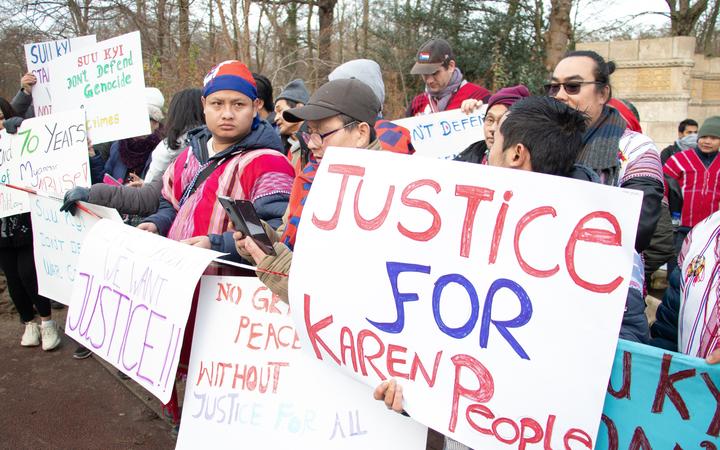 "She is a liar. A great liar," said Abdur Rahim, 52, at a community centre in the camp.

Outside the court in The Hague, a small group of pro-Rohingya demonstrators shouted: "Aung San Suu Kyi, shame on you!".

But her supporters came too - about 250 pro-Myanmar protesters who held placards bearing her face and the words, "We stand with you."

Pho phyu Thant - a Burmese national now living in Europe - was one of the organisers.

"The world needs to be more patient with Aung San Sui Kyi," she told the BBC.

"We support her and still believe in her. She is the only person who can bring about peace and prosperity in our country and resolve this very complicated situation."

Why is Myanmar in court now?

The Gambia, a small Muslim-majority west African nation, brought the case to the ICJ on behalf of dozens of other Muslim countries.

"All that The Gambia asks is that you tell Myanmar to stop these senseless killings, to stop these acts of barbarity that continue to shock our collective conscience, to stop this genocide of its own people," The Gambia's Attorney General and Justice Minister, Abubacarr M Tambadou, told the court.

His country had acted after he visited a Rohingya refugee camp in Bangladesh and heard of killings, rape and torture, he told the BBC in October.

At the start of 2017, there were a million Rohingya in Myanmar, most living in Rakhine state.

But Myanmar, a mainly Buddhist country, considers them illegal immigrants and denies them citizenship.

The Rohingya have long complained of persecution, and in 2017 the military - the Tatmadaw - launched a massive military operation in Rakhine.

According to The Gambia's submission to the ICJ, the clearances were "intended to destroy the Rohingya as a group, in whole or in part", via mass murder, rape and setting fire to their buildings "often with inhabitants locked inside".

A UN fact-finding mission which investigated the allegations found such compelling evidence that it said the Burmese army must be investigated for genocide against Rohingya Muslims in Rakhine.

In August, a report accused Myanmar soldiers of "routinely and systematically employing rape, gang rape and other violent and forced sexual acts against women, girls, boys, men and transgender people".

In May, seven Myanmar soldiers jailed for killing 10 Rohingya men and boys were released early from prison. Myanmar says its military operations targeted Rohingya militants, and the military has previously cleared itself of wrongdoing.

What is the likely outcome of this case?

For now, The Gambia is just asking the court to impose "provisional measures" to protect the Rohingya in Myanmar and elsewhere from further threats or violence. These will be legally binding.

To rule that Myanmar has committed genocide, the court will have to determine that the state acted "with intent to destroy in whole or in part" the Rohingya minority.

Even then the ICJ has no way of enforcing the outcome - and neither Aung San Suu Kyi nor the generals would automatically be arrested and put on trial.

But a guilty ruling could lead to sanctions, and would cause significant reputational and economic damage to Myanmar.

What is the current situation for the Rohingya?

Hundreds of thousands of Rohingya have fled Myanmar since the military operations began.

As of 30 September, there were 915,000 Rohingya refugees in camps in Bangladesh. Almost 80 percent arrived between August and December 2017, and in March this year, Bangladesh said it would accept no more.

In August, Bangladesh set up a voluntary return scheme - but not a single Rohingya person chose to go.

Bangladesh plans to relocate 100,000 refugees to Bhasan Char, a small island in the Bay of Bengal, but some 39 aid agencies and human rights groups have opposed the idea.

In September, the BBC's Jonathan Head reported that police barracks, government buildings and refugee relocation camps had been built on the sites of former Rohingya villages in Myanmar.