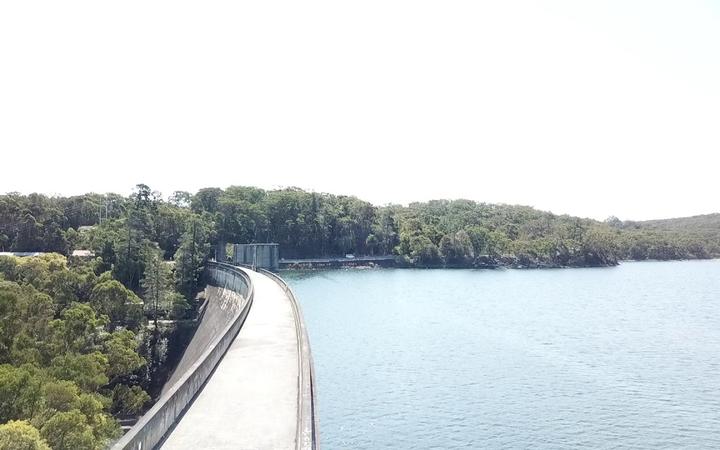 Metallic sediments that are a by-product of coal-mining activity are dissolving into the water of Cordeaux Dam. Photo: Supplied / WaterNSW

The data, obtained by the ABC under freedom of information laws, revealed dozens of samples taken by WaterNSW from deep in Cataract Dam and Cordeaux Dam over the past three years show elevated levels of iron.

Water authorities say the contamination is not a concern because other sources of water are available to "balance water quality and quantity".

But they concede the falling storages of Sydney's dams are posing a serious challenge.

Cataract Dam and Cordeaux Dam directly supply water to the Macarthur region in Sydney's south-west, which is expected to swell to more than 600,000 people by 2026.

The booming area has no access to clean, desalinated water from the Kurnell plant.

Tap water is safe but questions raised about long-term future

The treated water that makes it to people's taps remains safe to drink but the results show the contamination in the dam is worsening.

Cataract Dam is only 26 percent full, prompting community debate about the long-term supply of clean drinking water during long droughts.

He said the pollution was caused by metallic sediments - deep in the dams' catchments - dissolving into the water.

The sediments are a by-product of coal-mining activity, which over many decades has damaged Sydney's rock beds, swamps and streams.

The records show samples from Cataract and Cordeaux dams have exceeded acceptable limits more than 90 times in three years.

Dr Wright said that while small doses of iron are safe to drink, an elevated level usually indicates more dangerous contaminants in the dams.

The deepwater samples also show levels of aluminium are unusually high in both dams.

A WaterNSW spokesperson conceded "the drought has caused some challenges to water quality".

They described the "variation" as a "common and natural occurrence", and said any contaminants were filtered to meet Australian standards.

Rapid changes in currents, water levels or temperature in a dam can trigger the metallic sediment at the bottom of the dams to chemically dissolve, causing contamination of higher water levels.

"It looks like sludge or ooze," Dr Wright said.

"It's a very viscous, runny sort of mud at the bottom of these reservoirs.

"Inside this sludge there are salts and minerals, there is iron, aluminium and manganese.

"There is lithium, strontium, barium, titanium. There is going to be zinc and nickel."

The impact of mining in water catchments was last year probed by an independent expert panel appointed by the office of the NSW chief scientist.

The WaterNSW spokesperson said that study "did raise concerns about the potential for metals to enter dams in the long term" but that more research was needed.

The Berejiklian government is reviewing the future of new mining projects in the catchment.

Julie Sheppard, from environmental group Protect Our Water Alliance, said the data from WaterNSW showed "iron levels are through the roof".

"We don't really know the full impacts of mining, but the suggestion is they are serious and ongoing and remain in perpetuity," she said.

NSW Water Minister Melinda Pavey has been contacted for comment.