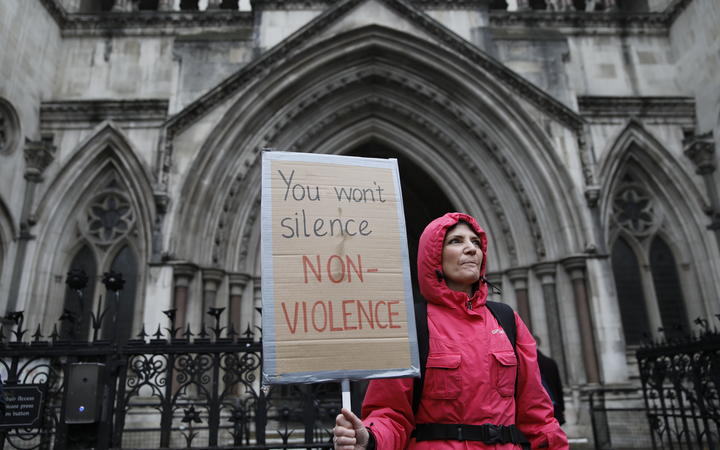 A supporter of climate action group Extinction Rebellion holds a placard outside the Royal Courts of Justice that houses the High Court in London on 24 October. Photo: Tolga Akmen / AFP

The Metropolitan Police imposed the ban, which prevented two or more people from the group taking part in protests, under the Public Order Act.

But judges have ruled that police had no power to do this because the law did not cover "separate assemblies".

The Met said it would "carefully consider" the ruling.

During the court hearing, the force had argued that the ban was the only way to tackle widespread disruption.

Lord Justice Dingemans said: "Separate gatherings, separated both in time and by many miles, even if co-ordinated under the umbrella of one body, are not a public assembly within the meaning of... the Act.

"The XR [Extinction Rebellion] autumn uprising intended to be held from October 14 to 19 was not therefore a public assembly... therefore the decision to impose the condition was unlawful because there was no power to impose it under... the Act."

The judges noted that there are powers within that act which may be used lawfully to "control future protests which are deliberately designed to 'take police resources to breaking point"'.

During 10 days of climate change protests last month, activists shut down areas around Parliament and the Bank of England, and targeted London City Airport.

Police had previously warned protesters to keep demonstrations in Trafalgar Square, or risk arrest - before issuing a city-wide ban on 14 October, under Section 14 of the Public Order Act.

The court was told that the ban was issued on the same day as a message posted online by London activists.

It told protesters to adopt the "be water" tactics used by demonstrators in Hong Kong.

"Be water, crowds split up into fast moving groups and pairs, that network via phones," it said.

"You gather at particular spots in large numbers, until the police response building then you move to a new disruptive site."

The ban was lifted four days later, with officers saying that it was no longer necessary because demonstrations had ended.