A British foreign office minister, Mark Field, has been suspended after grabbing a female Greenpeace activist at a black-tie City dinner in London. 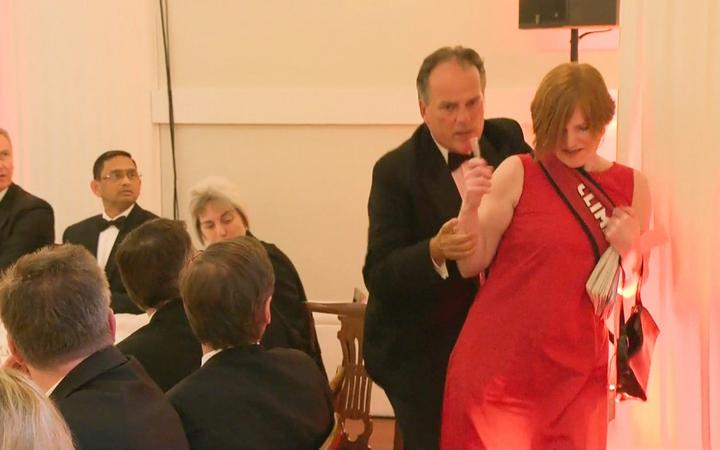 Mark Field confronts protester Janet Barker as she passes his table at a dinner in London. Photo: AFP

The MP has apologised for confronting Janet Barker and marching her away as protesters interrupted a speech by Chancellor Philip Hammond.

Ms Barker suggested Mr Field "go to anger management classes" but said she did not intend to complain to police.

Mr Field said he had been "genuinely worried" she may have been armed.

BBC home affairs correspondent Daniel Sandford said there were also "very serious questions to be asked" about security, as a "large number" of protesters had apparently managed to "walk through" to the event at London's Mansion House.

Footage of the incident involving Mr Field has been widely shared on social media, with several Labour politicians calling for him to be sacked. 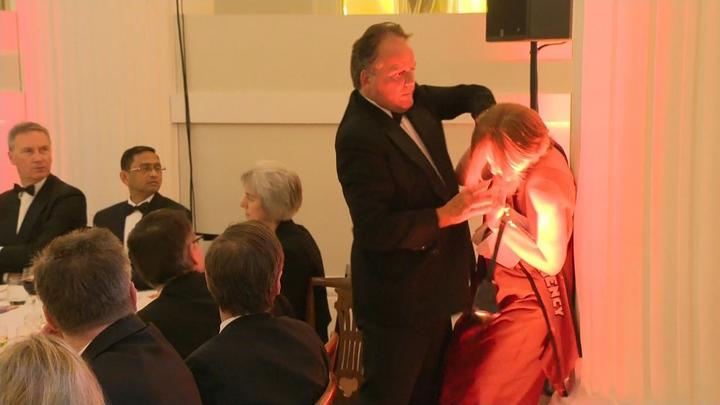 A Downing Street spokeswoman said Prime Minister Theresa May had "seen the footage" and "found it very concerning".

She added that Mr Field had "referred himself to both the Cabinet Office and the Conservative Party. He will be suspended as a minister while investigations take place".

Climate change protesters - wearing suits, red dresses and sashes with "climate emergency" written on them - entered Mansion House on Thursday night, as Mr Hammond was beginning his speech on the state of the economy.

One of them began reading an alternative speech.

As Ms Barker walked past his table, Mr Field stood up, stopped her and pushed her against a column.

The Conservative MP for the Cities of London and Westminster then put a hand on the back of her neck and led her out of the room.

Ms Barker told the BBC the purpose of the protest had been to speak to "men who are in power, the bankers, the investors that are continuing to invest into fossil fuels".

"We were polite with people and said: 'We're here to deliver a message'," she said.

City of London police said they were looking into "a number of third-party reports of a possible assault".

"He certainly manhandled me in a way in which was very disagreeable," she said.

Asked if she felt Mr Field's actions amounted to criminal assault, Ms Barker said: "No, I don't think so. I don't want this to turn into a mud-slinging match."

The activist, who travelled from her home in Wales to take part in Thursday's protest, said: "Three hundred and fifty people were there and only one person reacted that way.

"It's more the behaviour of that individual. I want him to reflect on what he did and not do it again. Maybe he should go to anger management classes."

Before his suspension, Mr Field told ITV News that guests had "understandably felt threatened" and he had "instinctively reacted" when Ms Barker rushed past.

"There was no security present and I was, for a split second, genuinely worried she might have been armed," Mr Field said.

He added: "I deeply regret this episode and unreservedly apologise to the lady concerned for grabbing her, but in the current climate I felt the need to act decisively to close down the threat to the safety of those present."

Labour's shadow women and equalities minister Dawn Butler tweeted: "This is horrific... [Mark Field] must immediately be suspended or sacked." 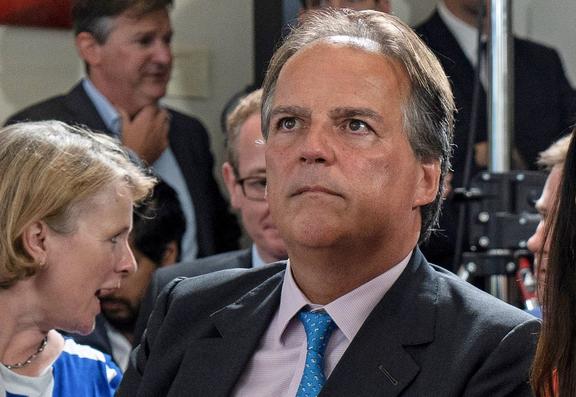 Mark Field at the launch of Jeremy Hunt's bid for the leadership of the Conservative Party. Photo: AFP

But Mr Field was defended by some of his colleagues, with Conservative MP Johnny Mercer tweeting: "He panicked, he's not trained in restraint and arrest, and if you think this is 'serious violence' you may need to recalibrate your sensitivities."

Conservative leadership contender Jeremy Hunt, who, as Foreign Secretary, is Mr Field's boss, said: "Mark has issued a full and unreserved apology. He recognised that what happened was an over-reaction.

"In his interest and in the interest of the lady involved we need a proper [Cabinet Office] inquiry and that's what going to happen."

The City of London Corporation said it was investigating how security had been breached at Mansion House, adding it would be "reviewing arrangements for future events".