Californian Governor Gavin Newsom has declared a statewide emergency as wildfires, whipped up by fierce winds, continue to sweep through the area. 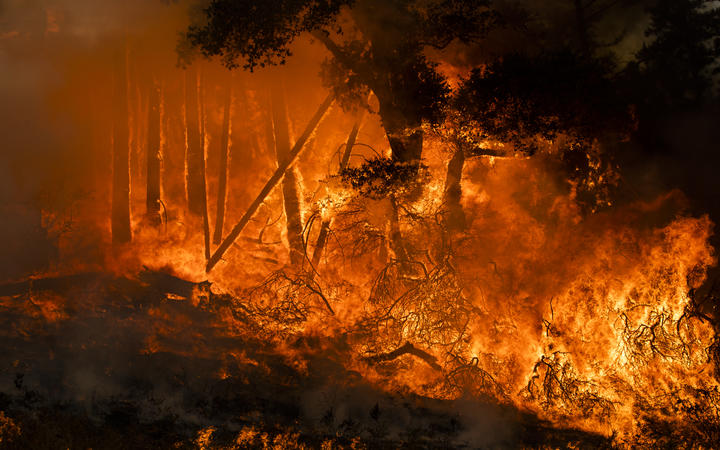 Fire burns along a hillside during firefighting operations to battle the Kincade Fire in Healdsburg, California on 26 October, 2019. Photo: Philip Pacheco / AFP

Some 180,000 people in the north have been ordered to leave their homes and roads around Santa Rosa were packed with cars as people tried to flee.

Tens of thousands of homes are under threat from the wildfires.

The biggest blackouts in the state's history have already left a million people without electricity.

Another million people are expected to lose their supplies in the hours ahead.

The evacuation order encompasses a huge area of Sonoma County, including Santa Rosa.

Sonoma has been ravaged by the Kincade Fire, which has burned through at least 12,000 hectares of land.

Fears about the extent of the wildfires led Pacific Gas & Electric (PG&E) to initiate a precautionary blackout expected to be the largest in state history.

"We have begun implementing the public safety power shutoff", a PG&E official confirmed in a press conference over the weekend.

In a statement the previous day, PG&E warned customers that they could be affected by a mass blackout, citing forecasts of potential extreme weather.

The warning came as the company faced scrutiny over its possible role in the fires.

The Kincade Fire in northern California began seven minutes after a nearby power line was damaged, but PG&E has not yet confirmed if the power glitch started the blaze.

The company is already seeking bankruptcy protection as it faces lawsuits over last year's Camp Fire, which killed 85 people. The deadliest wildfire in the state's history was sparked by ageing equipment owned by PG&E. It spawned billions of dollars in liability claims against the company.

In a video posted to Twitter on Saturday, Governor Newsom said the power cuts were "infuriating everyone, and rightfully so".

"We are going to do our best to get through these high wind events... and get these lights back on and do everything in our power to make sure PG&E's never in a position where they're doing this to us again," he said.

The Kincade Fire was about 10 percent contained as of Sunday morning local time.

The National Weather Service said a powerful windstorm was expected to create "potentially historic fire weather conditions" in the region.

By Sunday morning, gusts had reached 144km/h in the hills north of Santa Rosa and up to 80km/h across San Francisco's East Bay, the forecaster said.

Forecasts predict the high winds will continue into Monday morning.

In a press conference on Sunday, a meteorologist for the service said these conditions are expected to last until Monday.

"We're at the peak of the wind event right now," the meteorologist said. "We still have another 24 hours of dangerous red flag conditions."

In suburban Los Angeles, the Tick Fire had charred 4615 acres (1867 hectares) and was 55 percent contained as of Sunday morning. All residents who were told to evacuate have returned home.

Firefighters have also been battling several other blazes in the state.

Mexico's Baja California state is also tackling fires. Authorities on Friday said three people had died there and more than 150 homes had been destroyed.

We are safe. The animals are safe and the house is still standing. But around us there are scenes of utter devastation. Some of my neighbors lost their homes. Thinking of everyone affected by the #tickfire pic.twitter.com/INaFqQO4Oq

BBC correspondent Peter Bowes lives in the Santa Clarita area north of Los Angeles, where the Tick Fire has been raging.

"My partner was in the house and had just seconds to get out, to pick up the dog, throw the dog in the car - gently - just get out. It happened that quickly and all our neighbours did exactly the same thing," he said on Friday.