California firefighters are racing against time as they cut defensive lines against a wildfire in Sonoma County's famed wine country and authorities ordered 50,000 people to evacuate, ahead of winds that are forecast to pick up at night and spread the flames. 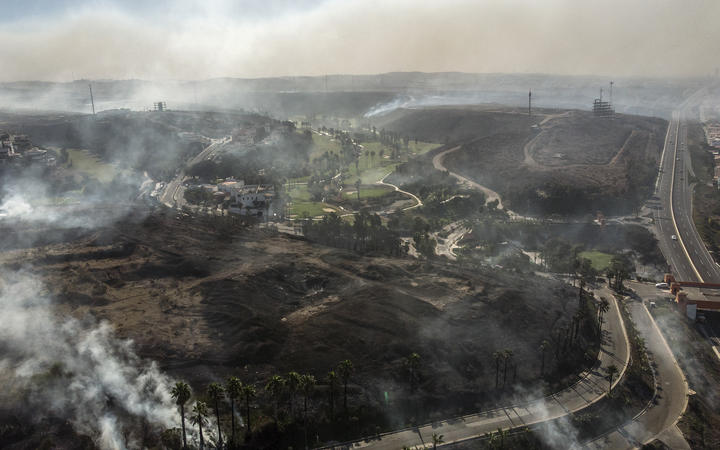 The 25,000-acre (10,000ha) Kincade fire in rugged and steep terrain north of San Francisco was one of two major wildfires burning in California, with the other, the Tick Fire, raging in suburban Los Angeles where it has charred 4600 acres (1700ha).

The more than 2000 firefighters battling the Kincade fire, which officials said was 10 percent contained and had destroyed nearly 50 structures, faced a more immediate threat from weather than crews battling the Tick fire.

The National Weather Service has issued a "red flag" warning for areas around the Kincade fire, with low-humidity drying out plants and trees and leaving the flames with plenty of combustible fuel. And conditions were only expected to worsen.

Winds were expected to pick up on Saturday afternoon (US time) and reach peak intensity late at night into early Sunday, with sustained speeds up to 90km/h and gusts of 130km/h in mountains and canyons, said Jeremy Grams, lead forecaster at the federal Storm Prediction Centre.

"Any ongoing fires or any new fire starts will have the opportunity to spread very rapidly," Mr Grams said.

The winds were forecast to weaken on Sunday afternoon.

The cause of the Kincade Fire is still under investigation, but officials have said it erupted on Thursday near the base of a damaged high-voltage transmission tower owned by the troubled utility Pacific Gas and Electric Corp.

Earlier in the week, authorities had ordered 2000 people to evacuate their homes, with Sonoma County Sheriff's Office spokeswoman Karen Hancock describing the flames as having come closest to the community of Geyserville.

On Saturday, authorities expanded evacuation orders in the nearby communities of Windsor and Healdsburg, with more than 50,000 people told to leave home by 4pm local time when power was expected to be shut off in those area, Ms Hancock said. 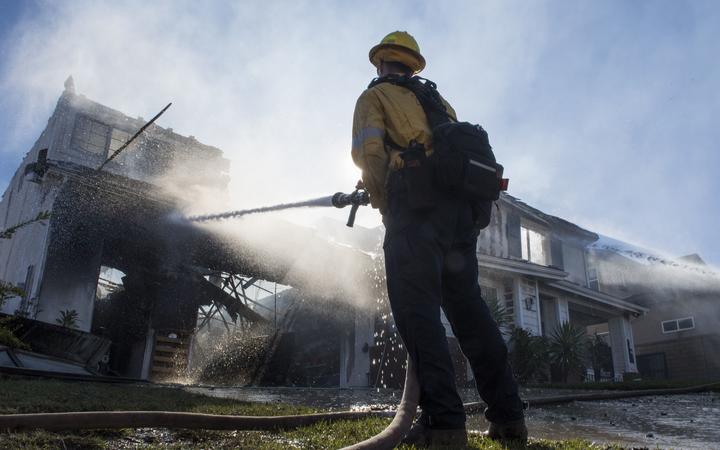 A firefighter hoses down a burning house during the Tick fire in Agua Dulce near Santa Clarita, California. Photo: AFP

Aside from threatening towns such as Geyserville, a historic enclave home to about 900 residents and named for geothermal features in the vicinity, the blaze also has encroached on wineries in a region full of internationally-known vintners, including The Godfather director Francis Ford Coppola.

Two residents of Geyserville and a firefighter were injured on Friday evening, when they had to crawl into an emergency fire shelter to protect against quickly advancing flames, San Francisco television station KRON reported.

On Saturday, authorities took advantage of the lull in winds to dispatch several air planes and helicopters to fight the Kincade Fire, said Tricia Austin, a spokeswoman for the California Department of Forestry and Fire Protection.

Among the planes attacking the blaze was a Very Large Air Tanker (VLAT), which can carry more than 30,000 litres of fire retardant.

PG&E said on Twitter it had notified about 940,000 power customers in 36 counties of Northern California that their power may be shut off.

California Governor Gavin Newsom, a Democrat, has blamed the utility for decades of lacklustre investment in its infrastructure that he says make its protective blackouts larger than they need to be.

The Tick and Kincade fires have worsened air quality in Los Angeles, San Francisco and areas around those two large cities.

In LA's San Fernando Valley, which is just south of the Tick fire, officials closed all public schools on Friday, giving thousands of students the day off, because of poor air quality.

At its peak, the Tick fire burning in the Santa Clarita Valley north of Los Angeles had forced the evacuation of about 50,000 people. It has destroyed at least nine structures since erupting from an unknown cause on Thursday and has been 25 percent contained, officials said on Saturday. No injuries have been reported.