Pope Francis has installed new cardinals, putting his stamp on the future of the Roman Catholic Church with men who share his vision for social justice, immigrants' rights and dialogue with Islam. 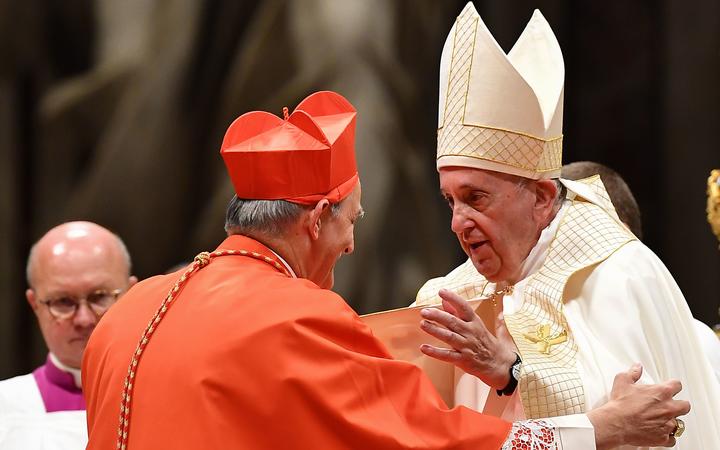 Pope Francis embraces new Cardinal Italian prelate Matteo Maria Zuppi after he appointed him during an Ordinary Public Consistory for the creation of new cardinals, in Rome. Photo: AFP

Ten of the 13 bishops elevated to the high rank are under the age of 80 and so are eligible to vote in a conclave to elect a new pope from their ranks.

Francis has now appointed more than half of the 128 cardinal electors, increasing the possibility that the next pope will continue his progressive policies.

Over six years he has appointed more cardinal electors than those still alive who were named by former Pope Benedict and the late Pope John Paul combined.

At a ceremony in St Peter's Basilica, known as consistory, Francis gave the new cardinals their trademark red biretta, or hat, and asked them to always be compassionate with others and loyal. 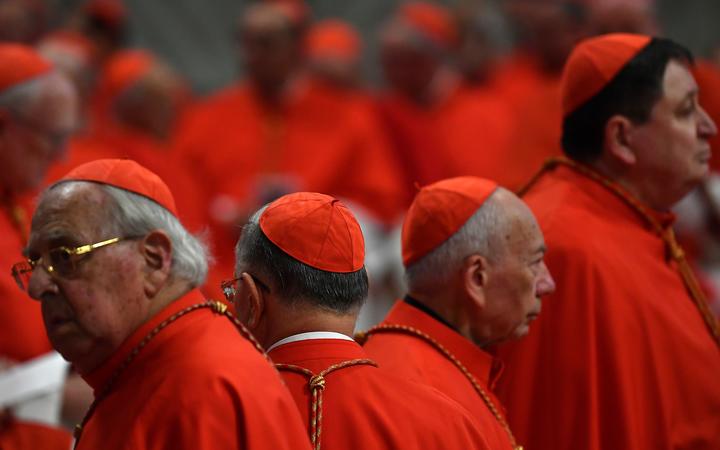 Cardinals attend the ceremony for the creation of 13 new cardinals. Photo: AFP

The geographical distribution of the new cardinal electors reflects Francis's desire to give more clout to small national churches outside of Europe and North America, countries on the periphery of world political power. Nearly 50 percent of the cardinal electors now come from the developing world.

"I think that the pope wanted to make visible the churches that were almost invisible," said Cardinal Cristobal Lopez Romero, of Rabat, the capital of Morocco, which is overwhelmingly Muslim.

Cardinal Romero, 67, is one of four new cardinal electors who are steeped in experience with Islam.

The others are Cardinal Miguel Angel Ayuso Guixot, 67, the Spanish head of the Vatican's department for inter-religious dialogue; British Cardinal Michael Fitzgerald, 82, one of the Church's foremost experts on Islam and the Koran, and Cardinal Ignatius Suharyo Hardjoatmodjo, 69, the archbishop of Jakarta in Indonesia, the country with the world's largest Muslim population. 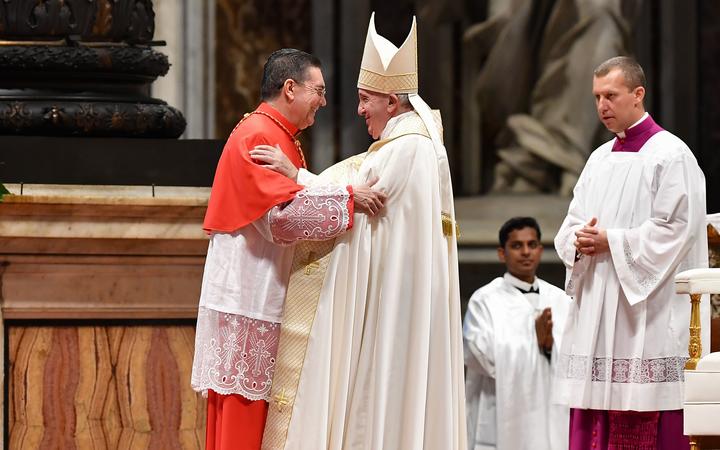 Clerics who have fought for social justice and defended the rights of the poor and immigrants were also prominent among the new cardinals.

Cardinal Alvaro Leonel Ramazzini Imperia, 72, of Guatemala has helped farmers there buy their land to grow coffee, led campaigns against pollution caused by mining, and stood up to multinational corporations.

Cardinal Michael Czerny, 73, a Canadian who was born in the former Czechoslovakia, has worked with the poor in El Salvador and Kenya and is currently the Vatican's expert on migration, a choice reflecting Francis' own strong defence of immigrants.

Cardinal Jean-Claude Hollerith, 61, of Luxembourg has taken a strong stand against Europe's populist leaders, saying this year that they were playing an "ignoble game" by creating fear of migrants and Muslims.

Italy's Cardinal Matteo Zuppi, 63, archbishop of Bologna, hails from the progressive Rome-based Santo' Egidio Community, which helps the poor, migrants, homeless and refugees around the world.

Cardinal Frivolling Ambo Besungu, 59, archbishop of Kinshasa in the Democratic Republic of Congo, stood up to former president Joseph Kabila when he delayed elections and also defended Catholics who took part in pro-democracy demonstrations.

Cardinal Sights Tamkevicius, 81, of Lithuania, spent six months in prison and more than five years in exile in Siberia for his defence of religious freedom during the Soviet era.

Cardinal Juan de la Caridad Garcia Rodriguez, 71, of Cuba, helped get priests to minister to prisoners on the communist-run island after the government began permitting them in the late 1980s.