Climate protesters marched through Paris for a second day on Saturday (local time) in a rally that saw sporadic clashes between masked demonstrators and police who also broke up "yellow vest" groups trying to stage unauthorised gatherings in the capital. 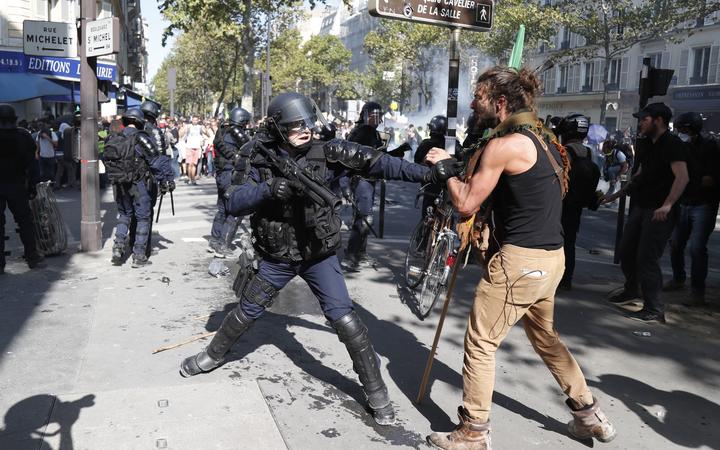 The climate protest drew some 16,000 participants, according to the police, a day after several thousand young people had turned out in Paris, as in other cities worldwide, to demand government action over climate change.

Demonstrators carried signs with slogans such as "End oil now" and "End of the world" and displayed an effigy of President Emmanuel Macron wearing a crown marked "King of bla-bla".

Mr Macron, who will attend a United Nations climate conference next week in New York, was also targeted by a giant banner in English unfurled on a bridge on the river Seine. It read "Macron polluter of the earth", with the word "champion" crossed out.

Some demonstrators held an unauthorised march to Bastille square in the early evening. 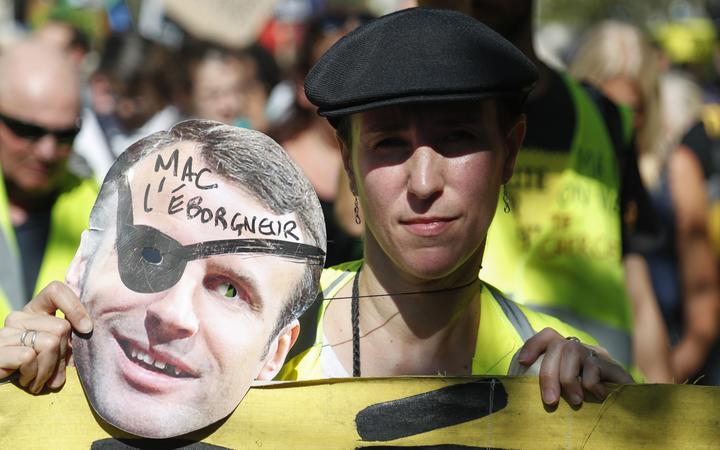 A protester poses with a cut-out of the French President during the climate change protest in Paris. Photo: AFP

The largely peaceful climate rally was marked by brief confrontations between police and masked demonstrators.

Small groups wearing black clothing associated with the "black bloc" anarchist movement formed barricades, set fire to bins and bicycles, and threw paint over the front of a bank.

The authorities had deployed a massive police presence as they feared yellow-vest and black-bloc activists would take advantage of the climate change march and a separate protest over pension reform.

Some 7500 police were mobilised, several districts including the Champs-Elysees were made out-of-bounds for protests, and over 30 metro stations closed. 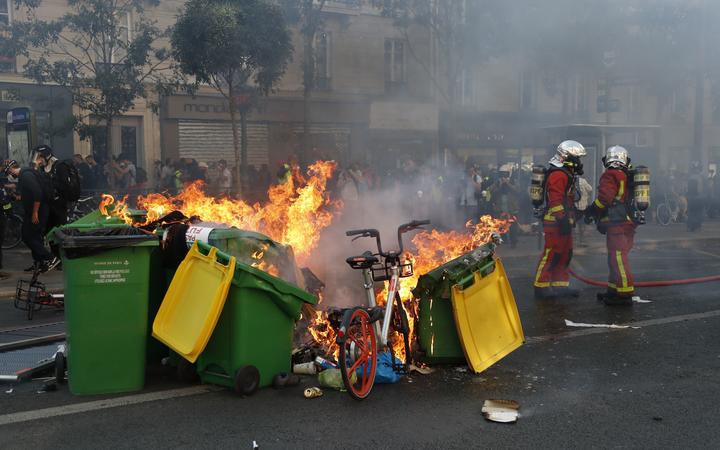 Police had made 163 arrests in Paris by late afternoon and earlier in the day pushed back around 100 protesters who gathered on the Champs-Elysees shopping avenue, the Paris police prefecture said.

There were further confrontations on the Champs-Elysees in the evening, with news channels showing clouds of tear gas and the fire brigade putting out a small fire.

The yellow vests, named after motorists' high-visibility jackets, were holding a 45th consecutive Saturday of action. The movement emerged late last year, triggered by fuel tax rises and swelling into a revolt against Mr Macron's style of government.

Some of their protests have been marked by rioting, partly blamed on black blocs.