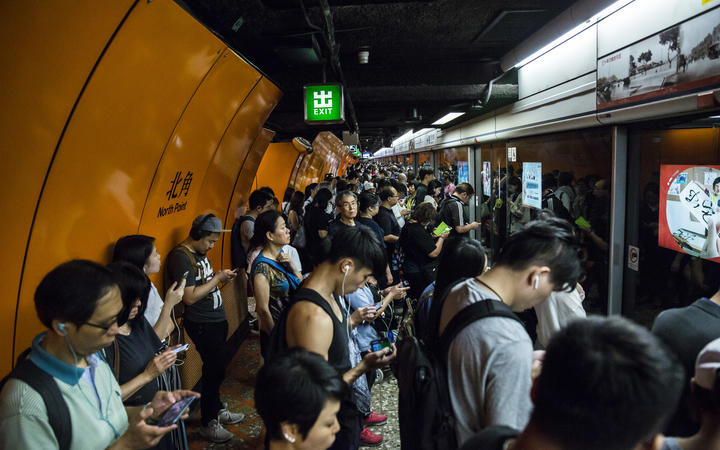 Commuters line up on a Mass Transit Railway (MTR) platform in Hong Kong on 30 July, 2019, after MTR services were resumed after being suspended by protesters demonstrating against a controversial extradition bill. Photo: AFP / Isaac Lawrence

What started three months ago as rallies against an extradition bill that would have allowed people in Hong Kong to be sent to mainland China for trial, has evolved into a wider backlash against the city's government and its political masters in Beijing.

Protests have occurred almost daily, sometimes with little notice, disrupting business, piling pressure on the city's beleaguered government and stretching its police force, which some have accused of using excessive force.

Activists prevented trains from leaving across the city, forcing hundreds of people to stream out of railway stations in search of alternative transport. Some blocked doors while others sounded emergency alarms.

Crowds of passengers were left stuck on subway platforms and services were badly delayed for much of the morning.

"I think my work and meeting could wait," one commuter told the BBC. "But our freedom, safety [and] human rights are being taken away and that can't wait - so I'm okay with it."

"I think it's okay because the government should respond to the demands of the citizens," another said.

There were some scuffles between protesters and commuters, who were advised by travel companies to seek alternative forms of transport.

Some travellers grew frustrated. "It's so inconvenient and annoying," one 64-year-old man told Reuters news agency, "I am in a hurry to work, to make a living."

But one masked protester said: "It's not our intention to inconvenience people, but we have to make the authorities understand why we protest.

"We don't have a leader, as you can see this is a mass movement now," she told Reuters.

"We understand some people want to express their view but we regret that their actions affected train services and other passengers," a spokesman for the company said.

The mass transit protests also follow a demonstration at the city's international airport on Friday and violent protests at the weekend when activists clashed with police who fired rubber bullets, tear gas and sponge grenades - a crowd-control weapon.

While the government has paused work on the controversial extradition bill, protesters now want it withdrawn completely, as well as an independent inquiry into police violence, and democratic reform.

They want the territory's leader, Carrie Lam, who is not directly elected by voters and whose handling of the crisis has been widely criticised, to resign. 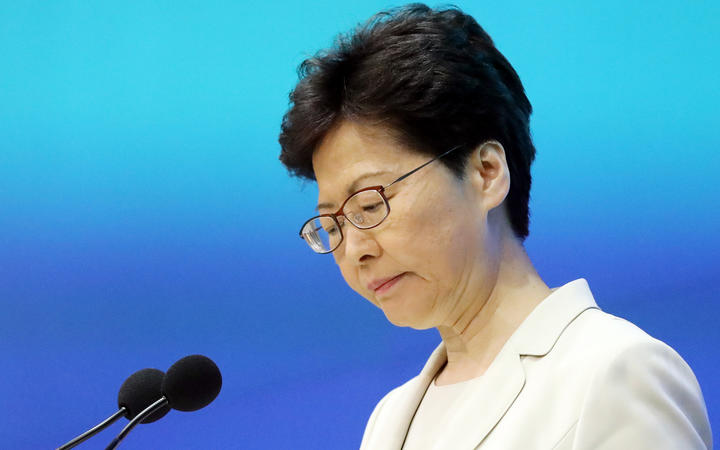 "She doesn't co-operate with the people of Hong Kong or respond to their demands," commuter Jason Lo, 31, told Reuters.

Hong Kong, which returned to China in 1997, is embroiled in its worst political crisis for decades after two months of increasingly violent protests that have posed one of the gravest populist challenges to Communist Party rulers in Beijing.

Ms Lam's popularity has dropped to a record low, according to a survey by the independent Public Opinion Research Institute released on Tuesday.

The survey, conducted between 17 July and 19 July, showed Ms Lam scored a rating of 30.1, down from 33.4 at the beginning of the month. Her approval rate stands at 21 percent, while her disapproval rate is 70 percent.

Over the last few years, many people in Hong Kong have become concerned about the whittling away of the city's freedoms, guaranteed under a "one country, two systems" formula established when it returned to China in 1997.

China denies interfering and has warned that the protests are an "undisguised challenge" to the formula under which the city is ruled, and risked damaging its economy.