The race is well under way within the Democratic Party to select a challenger to Donald Trump in next November's presidential election in the United States. 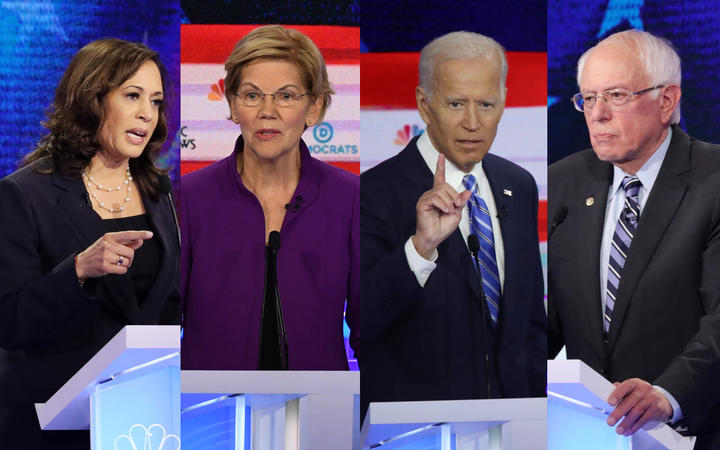 It is a crowded field, with more than 20 contenders vying to be chosen as the party's standard-bearer at the Democratic National Convention in a year's time.

But how have front-runners at this stage in the contest fared in previous presidential elections?

Mr Biden has been polling as the leading choice for around 30 percent of party voters, followed by Senators Bernie Sanders, Elizabeth Warren and Kamala Harris each with about 10-15 percent support.

It is an impressive lead, but popularity at this stage in the contest is certainly no guarantee of success.

Hillary Clinton can attest to that as the hot favourite for the 2008 nomination with a year to go, losing to Barack Obama in the final stretch.

Looking back in history, the pattern should give Mr Biden some cause for concern.

"For the last 50 years, Democrats have had a tendency to chew up and spit out their front-runners," says American pollster John Zogby, "so it's not always been kind to front-runners."

In 1972, Senator Ed Muskie's early lead was lost during the campaign, with outsider George McGovern eventually emerging at the front of the pack only at the Democratic convention.

In 1976, it was the dark horse Jimmy Carter, who not only broke through to win the nomination, but went on to become president.

Four years later, as sitting president, Mr Carter was challenged by Ted Kennedy, who consistently polled higher in the year ahead of the election, but ultimately failed to win the party nomination.

"There was a saying, 'America loves Teddy Kennedy when he is not running for president'," said Mr Zogby. In reality, while the public said they supported him in the polls, the majority of Democratic voters chose the unpopular incumbent Mr Carter to be their nominee.

There are of course counter-examples of Democrat front-runners holding their ground throughout the campaign but, all too often, contenders have been unable to capitalise on an early poll lead.

Of all the Democratic hopefuls over the past 50 years, only three eventual nominees were leading in the polls a year ahead of the convention.

None of these three - Walter Mondale, Al Gore and Mrs Clinton - went on to win the presidency.

"While the Democrats have not always been kind to front-runners, the Republicans have had the tendency to give the gold watch to the next in line, to the fellow waiting in the wings," said Mr Zogby.

In 1976, Ronald Reagan ran for the Republican nomination and came within a whisker of defeating Gerald Ford.

By 1980 he was seen within the party as the next in line, and won the nomination.

Mr Reagan's vice-president, George H W Bush, followed in 1988, challenged at that time by Bob Dole, who in turn became the front-runner and subsequent nominee in 1996.

"It's who's been there the longest," said Mr Zogby, "it's who's the best-known, it's who can raise the most money and who is acceptable to [all] wings [of the party]."

That was very much the case for nominee George W Bush in 2000, who polled with 50-60 percent support throughout.

The challenger John McCain was a popular senator, but could still not overhaul Mr Bush.

All rules are there to be broken of course, and in 2016 they were smashed to pieces.

Mr Zogby explains that the expected Republican successor Jeb Bush started off as the front-runner, but was trounced by Donald Trump, who succeeded in uniting factions of the Republican Party.

"It was anti-elite, and each one of the representatives of the elite fell for it. It was 'embarrass a member of the establishment, watch your numbers go up'."

Next year could be just as unpredictable.

"I wouldn't put money on anything at this point," says Lydia Saad, director of US social research at analytics company Gallup. "If you look historically at who was front-runner in the polls in July the year before the election, it's probably just as likely as not that they will be the nominee."