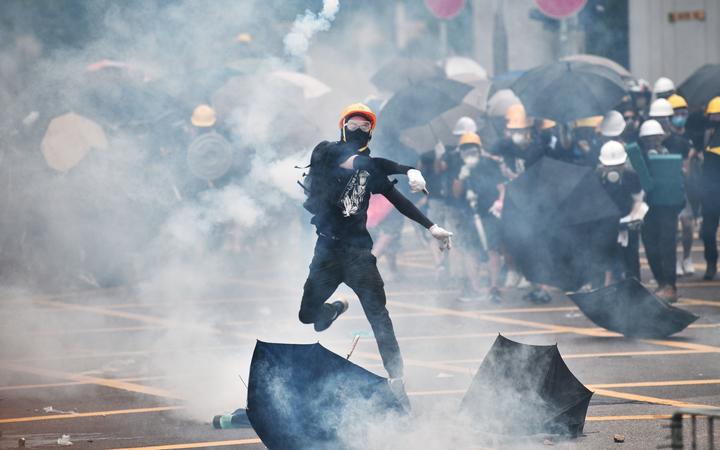 A protester throws tear gas back at police officers during a demonstration in the district of Yuen Long in Hong Kong. Photo: AFP

Activists held the march in Yuen Long, scene of the attack by club-wielding men, despite a police ban on safety grounds.

Building barricades out of street furniture and umbrellas, protesters threw rocks and bottles. Many armed themselves with hiking sticks and improvised shields from wood, surfboards, cardboard and other materials. 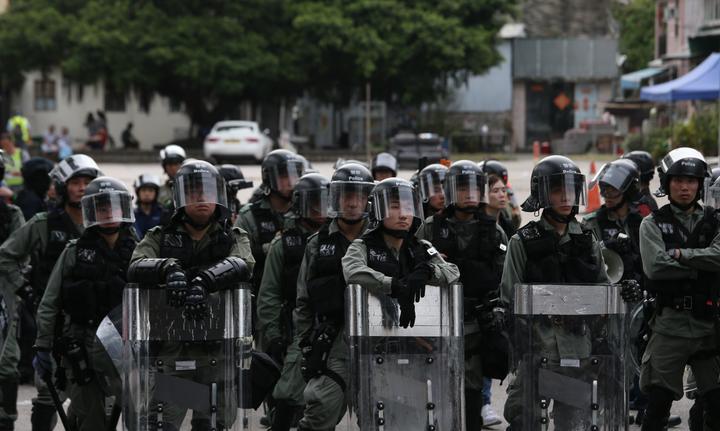 Riot police prepare to block the entrance to Yuen Long in an effort to stop the latest protest. Photo: AFP

Several hundred protesters remained as dark fell, fighting with police in the local train station, where blood could be seen spattered on the floor. Earlier, Reuters witnesses saw a hard core group of activists with small metal bats, metal and wooden poles and slingshots moving against the human tide.

"We are all waiting for the white shirts to come out. If they want to fight us we are ready," said Harlem Lo, a protester wearing a black T-shirt, who stood his ground despite riot police attempts to clear the area.

"We'll get revenge for the beatings if they come out."

"They deliberately let the triads beat up protesters to get revenge on us ... We're here to teach them a lesson," said one protester Kevin, shouting an obscenity outside a police station. 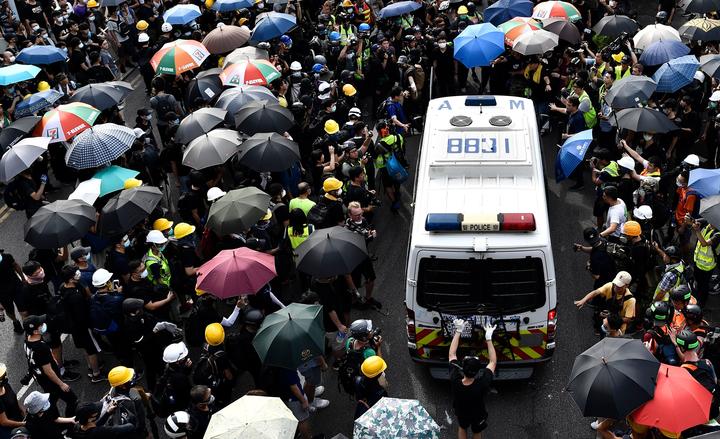 The Yuen Long attack and the vandalism at the Liaison Office marked new fronts in a protest movement that has intensified over the last two months.

The protests, considered the most direct challenge to the authority of China's President Xi Jinping on Hong Kong, mushroomed on Friday as thousands of activists thronged the arrivals halls of Hong Kong international airport.

The protesters, initially demanding the scrapping of a bill that would have allowed people to be sent to mainland courts for trial, are now also seeking independent inquiries into police use of force, the resignation of Hong Kong leader Carrie Lam and full democratic reform - anathema to Beijing's Communist Party leadership.

"Just listen to the people of Hong Kong - they're trying to send a message to Beijing. I don't think Hong Kong is just another city of China, and I think China has to respect that," said James Yip, 27, protesting on Saturday but, unlike many fellow demonstrators, praising police for their restraint.

The crisis has begun exposing fissures in Ms Lam's administration, with police chiefs and rank-and-file officers enraged at an apology over last weekend's violence from her chief secretary on Friday, apparently made without consultation.

The official, Matthew Cheung, said the government would not shirk its responsibility "and the police's handling fell short."

On Saturday, government-funded broadcaster RTHK reported an update from Mr Cheung in which he said he "totally supports" police and the force had "fulfilled its duties in maintaining social order under enormous stress at this difficult time".

Britain handed Hong Kong to China in 1997 amid guarantees that its core freedoms and autonomy, including the right to protest and an independent judiciary, would be protected under a "one country, two systems" formula.

Many fear those rights are under threat.