Riot police have fired tear gas and rubber bullets at protesters in Hong Kong following a large pro-democracy rally in the city. 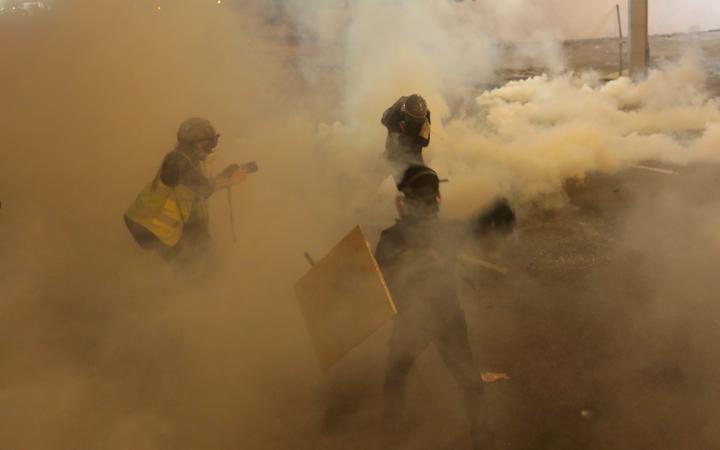 The clashes came after marchers ignored a designated finish line, continuing on to China's central government offices and throwing eggs at the building.

Mass protests have been held for weeks, initially over an extradition deal with mainland China but now covering other issues on democracy in Hong Kong.

Late on Sunday, riot police equipped with masks and shields were seen swarming towards protesters close to a ferry terminal on the main island.

Images outside the Liaison Office - China's central government building - show signs covered in graffiti. One of the slogan reads: "You taught us peaceful marches are useless."

Some protesters also covered CCTV cameras outside a police station with spray paint.

A number of pro-democracy protesters were attacked by masked men inside a metro station.

Video footage from the scene in Yuen Long show the group hitting people with sticks.

A man was seen pleading from inside the train begging them not to hit further. pic.twitter.com/q0ZQ21jI1I

The latest rally came after a huge haul of explosives was found along with protest leaflets.

On Saturday, a counter-rally in support of the police and against protest violence drew tens of thousands.

Tear-gas, rubber bullets, the trashing of parliament by protesters and sporadic clashes have created the worst crisis in the territory's recent history.

The Hong Kong government has since suspended trying to pursue the extradition bill.

The former British colony is part of China but run under a "one country, two systems" arrangement that guarantees it a level of autonomy. It has its own judiciary, and a legal system that is independent from mainland China.

What happened on Sunday?

The protest route was altered with protesters told to stop at Wan Chai rather than Central, where the key government offices are located.

Some 4,000 police officers were deployed.

She told reporters after the march: "Carrie Lam really needs to respond and I hope we will see that soon."

Previous marches have also largely been peaceful, but have sparked violence on the fringes. Last weekend's protests left 28 people, including 13 police officers, injured. 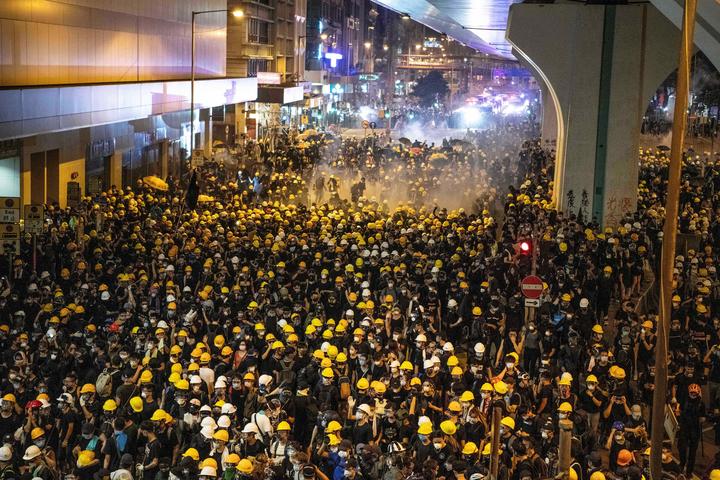 Clashes with police came after marchers ignored a designated finish line, continuing on to China's central government offices and throwing eggs at the building. Photo: AFP

Is the explosives find linked?

Officers discovered the haul when they entered an industrial building in the Tsuen Wan district on Friday evening.

They said they found 2kg of the highly volatile TATP, as well as 10 petrol bombs, acidic substances, weapons including knives and metal rods, and gas masks and goggles.

There were also banners and leaflets opposing the extradition bill and a T-shirt bearing the logo of the pro-independence Hong Kong National Front group.

What was the counter-protest about?

It took place in the central Hong Kong district of Admiralty on Saturday, attracting 103,000 people according to police, but more than 300,000 according to organisers.

The rally, which won coverage in Chinese state media, focused on support for the police and condemnation of the violence that has marred pro-democracy rallies.

Views differed, however, on how the Hong Kong government had tackled the crisis.

How did the protests start?

The demonstrations were sparked by the proposed extradition bill that would have allowed people to be sent to China for trial.

Critics said it would undermine Hong Kong's judicial independence and could be used to target those who spoke out against the Chinese government.

The Hong Kong government suspended the bill, but this has not halted the demonstrations, which now reflect broader demands for democratic reform and concerns that freedoms are being eroded.