France has hit its highest recorded temperature - 45.9C - amid a heatwave in Europe that has claimed several lives. 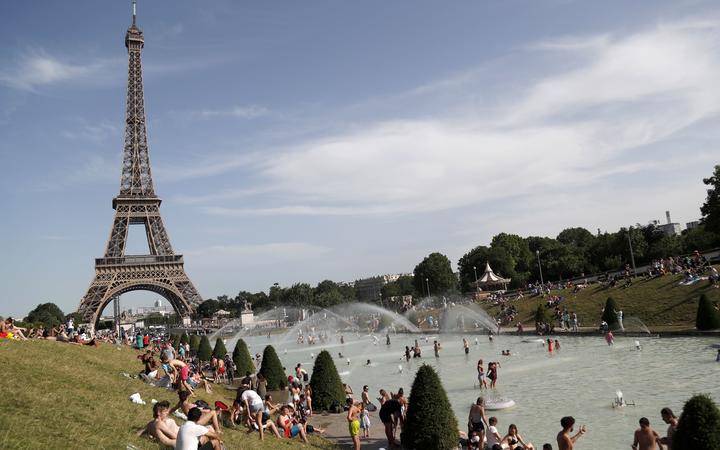 People bathe in the Trocadero Fountain near the Eiffel Tower in Paris during a heatwave. Photo: AFP

The new record was measured in the southern town of Gallargues-le-Montueux. Before this year the previous record was 44.1C during a heatwave in 2003 that killed thousands.

Health Minister Agnès Buzyn has said "everyone is at risk".

France's weather service has issued an unprecedented red alert for four areas. Those are all in the south, but most of the country remains on orange alert, the second highest level.

For the first time on record, #France sees a temperature above 45°C. Gallargues-le-Montueux recorded 45,9 °C, and Villevieille 45.1°C this afternoon. In France. in June. @meteofrance https://t.co/EfK5t9eCBd #heatwave #climatechange pic.twitter.com/yxGlfmUtms

The greater Paris region has banned more than half of cars from its roads as the stifling heat worsened air pollution. The cities of Lyon, Strasbourg and Marseille have also restricted traffic.

Swathes of the continent are experiencing extreme heat. Germany, France, Poland and the Czech Republic have all recorded their highest-ever June temperatures. 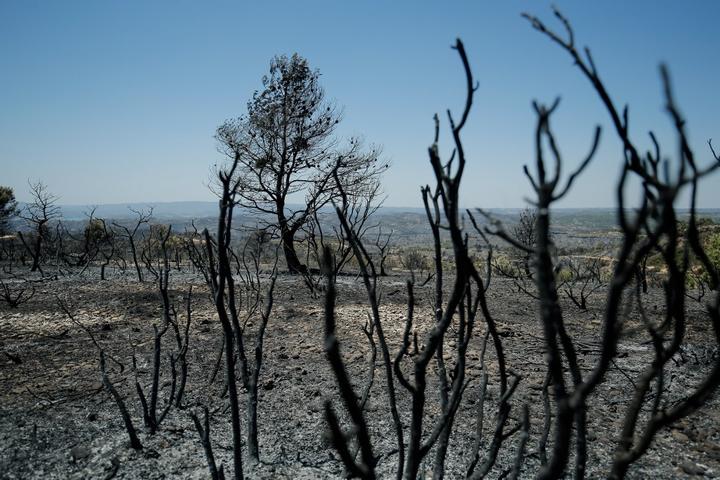 Burned trees near Flix are evidence of the forest fire that is burning out of control in the northeastern region of Catalonia in Spain. Photo: AFP

In Spain firefighters are battling Catalonia's worst wildfires in 20 years. The wildfires are raging across 60 sq km of land, but firefighters said that area could quadruple.

Eight provinces are on red alert while temperatures are expected to rise above 42C in many areas.

The Italian ministry of health has reported emergency levels of heat in 16 cities.

Several people are believed to have lost their lives as a result of the extreme temperatures, including two who died from suspected heatstroke in Spain.

One, a 17-year-old farm worker in Córdoba, went into convulsions after cooling down in the farm swimming pool, while an 80-year-old man died on a street in the northern city of Valladolid.

In France, Prime Minister Edouard Philippe said a drowning was taking place every day and warned that the heat was making people "take risks".

On Thursday a 33-year-old roofer died after being taken ill as he worked on a building site in the western city of Rennes, where the temperature was 35C in the shade.

A six-year-old Syrian child was also in a serious condition after being thrown into the air by the force of a water jet from a fire hydrant that had been opened by residents in Saint Denis, north of Paris.

In the UK, police warned people of the dangers of cooling off in rivers and lakes after a 12-year-old girl drowned in the River Irwell in Greater Manchester.

Why is it getting so hot?

Meteorologists say hot air drawn in from northern Africa is responsible, caused by high pressure over central Europe and a storm stalling over the Atlantic.

In southern France, the areas of Gard, Vaucluse, Hérault and Bouches-du-Rhône are expected to see temperatures between 42C and 45C today. 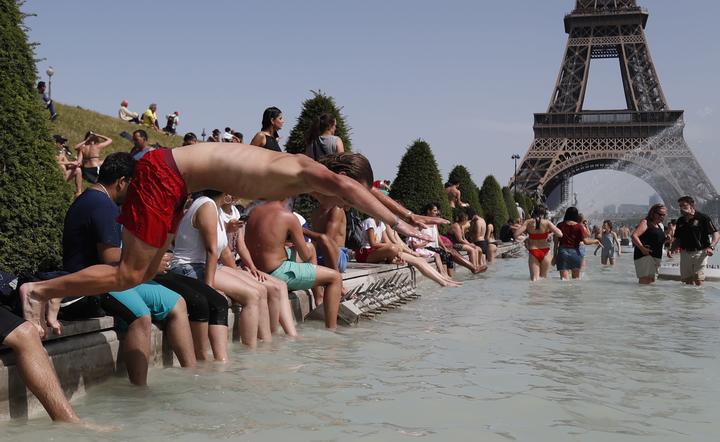 A boy jumps into the water of the Trocadero Fountain in Paris. Photo: AFP

French authorities have stepped up restrictions on water use to combat the heatwave's effects, while 4000 schools are now closed or have special measures in place to welcome pupils.

In a TV interview, Ms Buzyn said she was concerned about the increase in calls to emergency service numbers as a result of the heatwave.

She called on members of the public to avoid "risky behaviour" like leaving children in cars or jogging outside in the middle of the day.

Is climate change to blame?

Linking a single event to global warming is complicated.

While extreme weather events like heatwaves occur naturally, experts say these will happen more often because of climate change.

Records going back to the late 19th century show that the average temperature of the Earth's surface has increased by about one degree since industrialisation.

A climatology institute in Potsdam, Germany, says Europe's five hottest summers since 1500 have all been in the 21st century.

Scientists are concerned that rapid warming linked to the use of fossil fuels has serious implications for the stability of the planet's climate.