The US has admitted one of its drones has been shot down near Iran, but says it was over international waters, not Iranian airspace. 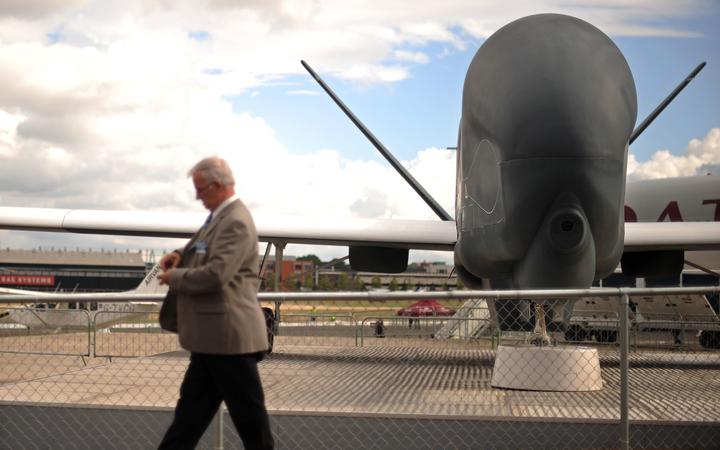 Iran's Revolutionary Guard claimed to have shot down an American drone, but the US denies it had any in Iranian airspace today.

Iran's Revolutionary Guard on its news website, Sepah News and Iran's state news agency IRNA - which called it a "spy" drone - both reported the downing of an RQ-4 Global Hawk in the southern province of Hormozgan on Thursday.

"It was shot down when it entered Iran's airspace near the Kouhmobarak district in the south," the Guards' website said.

Reuters news agency has since quoted an un-named US official saying the drone was downed in international airspace over the Straits of Hormuz, by an Iranian surface-to-air missile.

A spokesperson for the US military's Central Command, Navy Captain Bill Urban, earlier said "no US aircraft were operating in Iranian airspace today" and declined further comment.

The drone maker Northrop Grumman's website claims it RQ-4 Global Hawk can fly at high altitudes for more than 30 hours, gathering near-realtime high-resolution imagery of large areas of land in all types of weather.

Tension between Iran and the United States has spiked since last year, when US President Donald Trump exited a 2015 nuclear deal between Tehran and major powers and reimposed economic sanctions on the country.

Washington accuses Iran of being involved in explosive strikes on two oil tankers in the Gulf of Oman last week and four tankers off the United Arab Emirates on 12 May near the Strait of Hormuz, a major conduit for global oil supplies.

Iran has denied the accusation.

The report of the downed drone also came after the US military alleged Iran had fired a missile at another drone last week, when it responded to the tanker attacks.