US President Donald Trump has dismissed Iran's insistence it had no involvement with the attacks on two oil tankers in the Gulf of Oman. 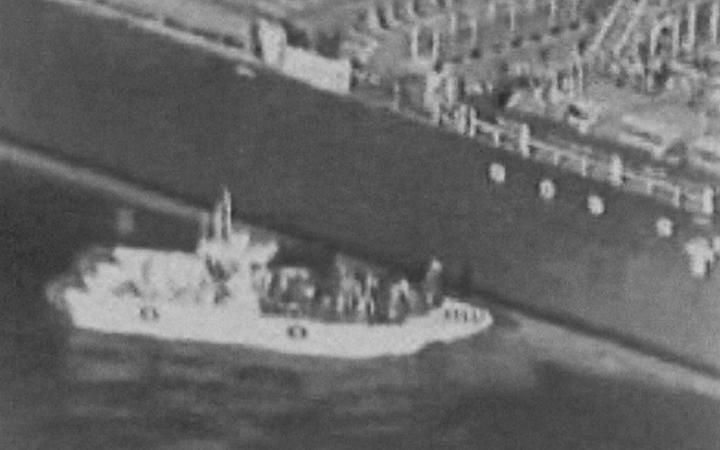 This grab taken from a video released by the US Central Command (USCENTCOM) on June 13, 2019, reportedly shows an Iranian navy patrol boat in the Gulf of Oman approaching the Japanese operated methanol tanker Kokuka Courageous and removing an unexploded mine. Photo: AFP / USCENTCOM

Mr Trump cited footage that Washington says shows Iranian forces in a small boat taking an unexploded mine off the hull of one of the ships.

The blasts came a month after four oil tankers were damaged in an attack off the coast of the United Arab Emirates. The US blamed Iran for that attack, but did not produce evidence. Iran also denied those accusations.

Tensions between the US and Iran have escalated significantly since US President Donald Trump took office in 2017. He abandoned a nuclear deal that was brokered by the Obama administration and significantly tightened sanctions on Iran.

Speaking to Fox News, he said Iran "did do it".

"I guess one of the mines didn't explode and it's probably got essentially Iran written all over it. And you saw the boat at night trying to take the mine off and successfully took the mine off the boat, and that was exposed," he said.

He also said it was unlikely that Iran could close the Strait of Hormuz - a vital shipping lane through which a third of the world's seaborne oil passes every year - but if it did, the strait would not remain closed "for long". 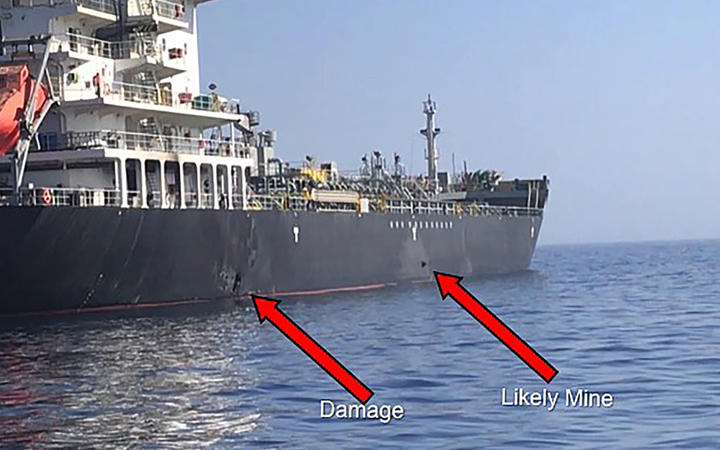 This handout powerpoint slide provided by US Central Command damage shows an explosion, left, and a likely limpet mine can be seen on the hull of the civilian vessel M/V Kokuka Courageous. Photo: AFP

Mr Trump's intervention came after Secretary of State Mike Pompeo said the weapons used, the level of expertise needed to carry out the attacks and, recent similar Iranian attacks on shipping showed Iran was behind it.

US Defence Secretary Patrick Shanahan said the US would be sharing intelligence to try to "build international consensus to this international problem".

How has Iran responded?

Iranian President Hassan Rouhani on Friday accused the US of posing "a serious threat to stability in the Middle East", without referring directly to the attacks in the Gulf of Oman.

He reiterated a call for international parties to the 2015 nuclear deal to honour their commitments, following a unilateral withdrawal by the Trump administration.

Foreign Minister Javad Zarif on Twitter accused the US of making an allegation "without a shred of factual or circumstantial evidence" and attempting to "sabotage diplomacy".

What we know about the explosions

According to the US account of events, US naval forces in the region received distress calls from the Norwegian-owned Front Altair at 6.12am (local time) and from the Japanese-owned Kokuka Courageous at 7am, following explosions, and moved towards the area.

It said the USS Bainbridge observed Iranian naval boats operating in the area in the hours after the explosions, and later removing the unexploded mine from the side of the Kokuka Courageous.

The crews of both vessels were evacuated to other ships nearby. Both Iran and the US later released pictures showing rescued crew members on board their vessels.

BSM Ship Management, which manages the Kokuka Courageous, said the ship's crew abandoned ship after observing a fire and an unexploded mine.

However Yutaka Katada, the president of the ship's operator, Kokuka Sangyo, said members of the crew had reported "that the ship was attacked by a flying object".

The Kokuka Courageous was about 30km off the Iranian coast when it sent its emergency call.

The Front Altair was carrying naphtha, a petrol product, from the United Arab Emirates to Taiwan. The Kokuka Courageous was carrying methanol from Saudi Arabia to Singapore.

According to global satellite monitoring company Iceye, the damage to the Front Altair caused some oil spill in the waters around the ship.

Why are US-Iran tensions so high?

In 2018, the US pulled out of the landmark nuclear deal reached in 2015 that was aimed at curbing Iran's nuclear activities. The move was strongly criticised by a number of countries, including the closest allies of the US.

In May, President Trump tightened US sanctions on Iran - mainly targeting its oil sector. Iran then announced it would suspend some commitments under the nuclear deal.

In recent months, the US has strengthened its forces in the Gulf - saying there was a danger of Iranian attacks. It sent an aircraft carrier strike group and B-52 bombers to the region.

In response, Iran accused the US of aggressive behaviour. Those tensions rose markedly after the 12 May limpet mine attacks in the UAE.

The UAE blamed an unnamed "state actor". The US said that actor was Iran, an accusation Tehran denied.