The United Arab Emirates has told the UN Security Council a "state actor" was most likely behind attacks on four tankers off its coast. 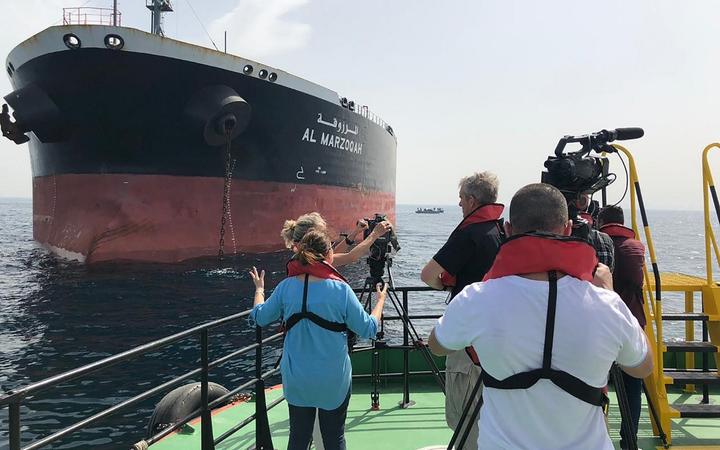 he Saudi oil tanker Al-Marzoqah, one of the four tankers damaged in alleged "sabotage attacks" in the Gulf emirate of Fujairah. Photo: AFP

The 12 May attacks bore the hallmarks of a "sophisticated and co-ordinated operation", according to its report.

The UAE did not say who it thought was behind the attacks, which also targeted vessels from Saudi Arabia and Norway.

The US has accused Iran of being behind the attacks but Tehran denies this and has called for an investigation.

The attacks took place within UAE territorial waters east of the emirate of Fujairah, just outside the strategically vital Strait of Hormuz, in what the UAE called a "sabotage attack".

They exacerbated long-standing tensions between Iran, and the US and its allies in the Gulf.

What does the report say happened?

According to the UAE-led investigation, which was presented to a closed session of the UN Security Council in New York, the attacks showed a "high degree of sophistication".

"The attacks required the expert navigation of fast boats" which "were able to intrude into UAE territorial waters", the report's preliminary findings say.

Divers were used to attack the ships using limpet mines in order to cause damage but not cause a major explosion, the presentation says.

There were no casualties but Saudi Arabia has said two of its ships suffered "significant" damage. Another tanker was Norwegian-registered, while the fourth was UAE-flagged.

Why is Iran being accused?

The attacks happened at a time of escalating tension between the US and Iran, long-time foes.

They took place days after the US sent warships and bombers to the region in response to what it said was an unspecified plan by Iran to attack US forces in the area.

Responding to the UAE report, the Saudi Ambassador to the UN, Abdallah Y al-Mouallimi, said the kingdom believed "that the responsibility for this action lies on the shoulders of Iran. We have no hesitation in making this statement," Reuters news agency reported.

US National Security Adviser John Bolton previously said "naval mines almost certainly from Iran" were to blame for the damage, although he provided no evidence to support the allegation.

However, Mr Bolton, long known for his hawkish stance on Iran, denied the Trump administration was seeking to overthrow the Iranian government.

"The policy we're pursuing is not a policy of regime change," he told reporters last week during a visit to London. "That's the fact and everybody should understand it that way."

Iran's foreign ministry has rejected the US accusations as "ludicrous" and accused Mr Bolton of being a "warmonger".

What are the underlying tensions?

At the start of May, Washington ended exemptions from sanctions for countries still buying oil from Iran.

The decision was intended to bring Iran's oil exports to zero, denying the government its main source of revenue.

US President Donald Trump reinstated the sanctions a year ago after abandoning the landmark 2015 nuclear deal that Iran agreed with six nations - the five permanent members of the UN Security Council and Germany.

Iran has now announced it will suspend several commitments under the deal.