Polls across the EU have closed in the European elections. 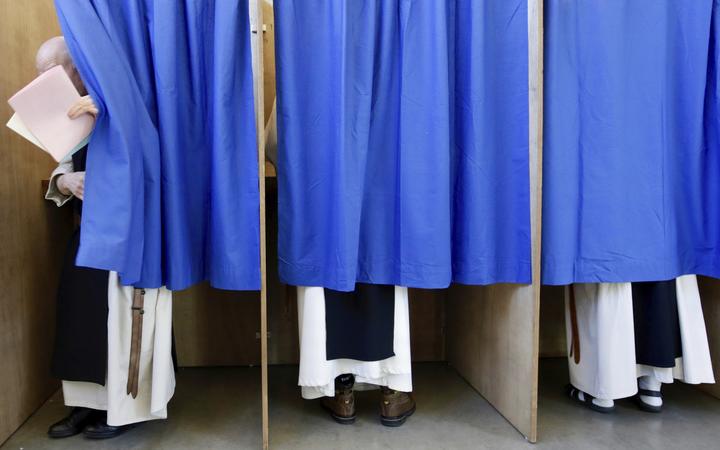 Monks from the Saint Sixtus Trappist Abbey cast their votes behind curtains at a polling station in Westvleteren, Belgium, Sunday, 26 May, 2019. Photo: AP

Parties committed to strengthening the European Union held onto two-thirds of seats in the EU parliament, although support for the two major centrist blocs has dipped, while far-right and nationalist opponents saw strong gains.

France's Emmanuel Macron, who has staked his presidency on persuading Europeans that the EU is the answer to the challenges of an uncertain, globalising world economy, took a personal hit when his centrist movement was edged into second place by Marine Le Pen's anti-immigration, anti-Brussels National Rally.

But Macron's Renaissance, built on the ruins of centre-left and centre-right parties, added to gains for liberals at the EU level.

Along with a surge for the Greens, that meant four groups occupying the pro-EU middle ground lost under 20 seats, securing 505 seats out of 751, according to a projection by the European Parliament.

That may complicate some policymaking, as a two-party "grand coalition" of the conservative European People's Party (EPP) and the Socialists (S&D) no longer has a majority.

But it also dents the hopes of Le Pen, Italian Deputy Prime Minister Matteo Salvini and others who have been seeking to disrupt attempts to forge closer EU integration.

Tensions among nationalists, who also include the Polish and Hungarian ruling parties and the new Brexit Party of British campaigner Nigel Farage, have limited their impact on policy. 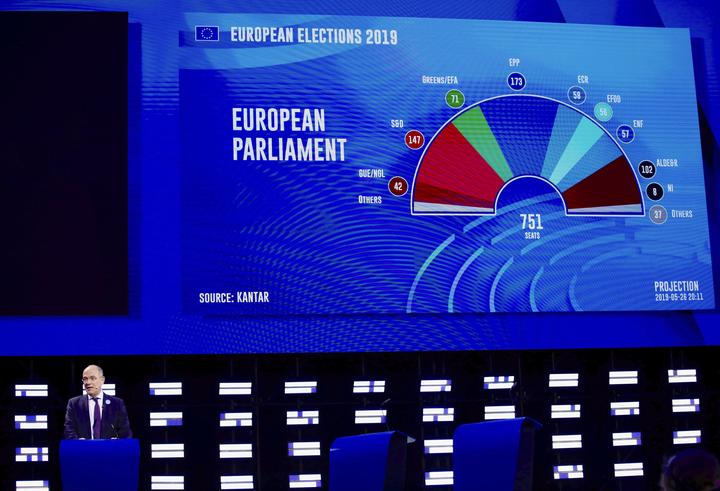 A presenter shows ongoing projections of results on a large screen in the press room at the European Parliament in Brussels. Photo: AP

The Brexit Party was showing significant support in UK exit polls, with both Labour and the Conservatives losing up to 20 percent of their support in some parts of the UK.

Mr Farage is determined that his MEPs will not sit for long in Brussels - though drama after the announcement of a resignation date by Prime Minister Theresa May leaves the fate of Brexit still very uncertain.

EU officials were delighted by an increase in turnout to 51 percent, up from 43 percent in 2014. It was the first reverse in a trend of falling participation since the first direct EU vote in 1979.

At its highest in 20 years, that turnout may muffle talk of a "democratic deficit" undermining the legitimacy of EU lawmaking.

In Germany, Chancellor Angela Merkel's conservatives lost seven percentage points from five years ago as the far-right Alternative for Germany gained four points to 11 percent. But the headlines there went to the Greens, who nearly doubled their vote to finish second on 21 percent, ahead of the Social Democrats.

In France, an official in Macron's team acknowledged "some disappointment" that, with some 22 percent, the president's Renaissance movement had lost first place to Le Pen's National Rally, which exit polls put on 24 percent.

However, pro-EU parties were still in the majority, with the French Greens coming third.

Added to the dazzling second place of their German counterparts, that lent credibility to expectations of a "green wave" that will influence policy in Brussels in the coming years - promoting controls on industrial polluters of the air, seas and land and tightening terms for EU trade deals with others.

On the far-right, two groups in the current parliament had a combined 108 seats, a 40 percent gain from 2014.