Pro-Brexit British politician Nigel Farage launched a campaign for an election that may never take place to an institution he routinely insults - the contest for UK seats in the European Parliament. 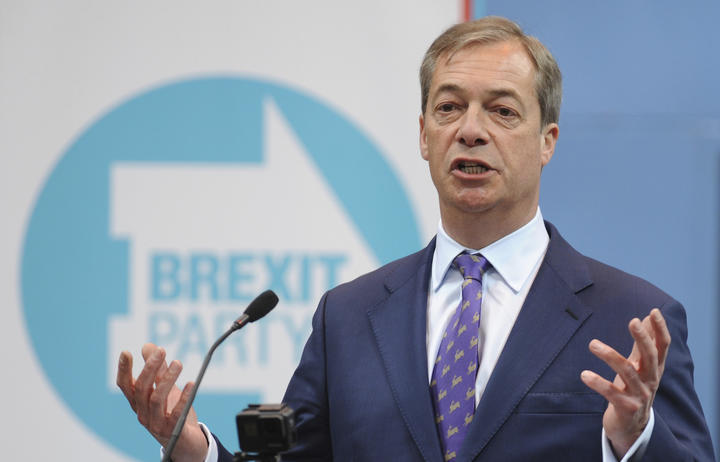 Britain was supposed to have left the European Union before the European elections, which take place in late May in every EU nation. But with Britain's Parliament still deadlocked over whether to approve the government's divorce deal with the bloc, EU leaders have postponed the Brexit deadline until Oct. 31.

British Prime Minister Theresa May says taking part in this year's European elections three years after the nation voted to leave the EU would be "unthinkable." She still hopes Britain can avoid the U.K.'s May 23 election by leaving the 28-nation bloc before then.

But with British lawmakers unwilling to endorse the divorce agreement that May forged with the EU, preparations have begun to fill the 73 U.K. spots in the 751-seat European legislature. Winning candidates from Britain will only get to serve as long as their country remains in the EU.

Britain's ruling Conservatives and the opposition Labour party are unenthusiastic about running in the European Parliament election, where they are likely to be punished by disgruntled voters.

But pro-Brexit and pro-EU parties are eager to run in a contest seen by many as a way to express their strongly divergent views on the EU.

Farage held the first campaign rally of his newly formed Brexit Party, calling delays to Britain's departure from the EU "a willful betrayal of the greatest democratic exercise in the history of this nation."

"The fightback begins here," said Farage, who formerly led the U.K. Independence Party and has sat in the European parliament since 1999.

Farage was instrumental in helping the Leave side win Britain's 2016 referendum on EU membership, but stepped down as UKIP leader after the referendum. UKIP has since shifted to the far right; its new leader hired anti-Muslim agitator and convicted fraudster Tommy Robinson as an adviser.

Farage said he did not want to be a part of a party that promoted "violence, criminal records and thuggery."

Other candidates for the Brexit Party include Annunziata Rees-Mogg, sister of pro-Brexit Conservative lawmaker Jacob Rees-Mogg.

"I joined the Conservative Party in 1984 and this is not a decision I have made lightly - to leave a party for which I have fought at every election since 1987, from Maggie Thatcher through to Theresa May," she said. "I know which one I'd rather have representing us now."

The pro-EU Independent Group, founded by British lawmakers who quit Labour and the Conservatives, has registered to become a political party so it can run in the EU election on a platform calling for a new referendum on Britain's EU membership.

After months of acrimonious, indecisive yet cliff-edged wrangling in Parliament over Brexit, U.K. lawmakers began a 10-day Easter break on Friday. May has urged them to "reflect" and use the break to "resolve to find a way through this impasse."

Talks continued Friday between senior lawmakers in May's Conservative-led government and the Labour Party in hopes of striking a compromise Brexit deal that can win majority support in Parliament. Several rounds of negotiations over the past week have so far failed to reach a Brexit compromise.

Labour economy spokesman John McDonnell said the talks would continue and "we will see by the end of next week how far we have got."