Australian opposition Leader Bill Shorten fought back tears today as he launched a scathing attack on The Daily Telegraph for an article the newspaper has written about his mother.

He has attracted the support of Prime Minister Scott Morrison in criticising the News Corporation publication, which, under the headline "Mother of Invention", accused the Labor leader of omitting parts of his mother's career while talking about the sacrifices she made to raise her children.

Mr Shorten said his mother died from a catastrophic heart attack in her sleep in April 2014.

"I'm glad she wasn't here today to read that rubbish."

While appearing on Q&A on Monday, Mr Shorten had spoken of his mother, Dr Ann Shorten, as his inspiration.

He said she had wanted to study law but had to take a teacher's scholarship so she could support her younger siblings.

The newspaper accused Mr Shorten of having neglected to say that his mother did go on to study law, and gained first-class honours before going on to practise for six years. 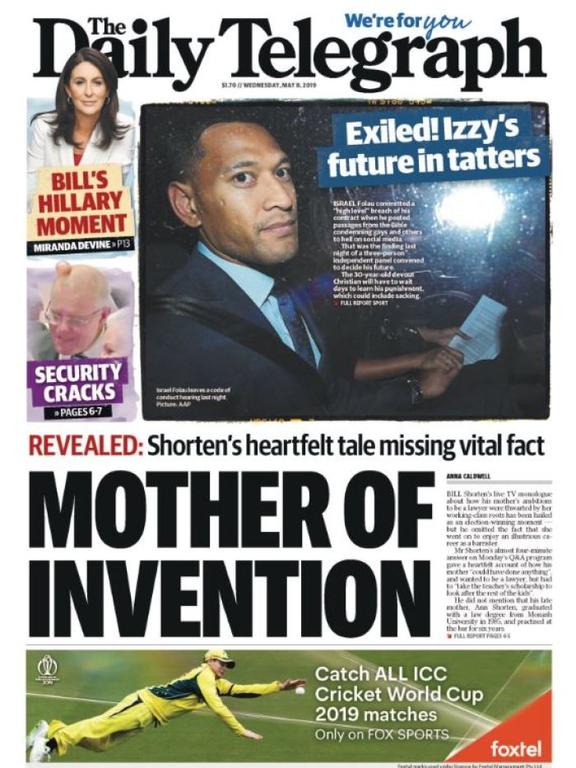 "I didn't read it all because there's only so much time in your day and you can't afford to waste it on the rubbish," Mr Shorten said of the article today.

"They think that [because] I explained myself at Q&A on a Monday night, that they play gotcha shit about your life story - more importantly, my mum's."

"In a new low, The Daily Telegraph has decided to use my mum's life as a political attack on me, and on her memory," Mr Shorten said.

The Opposition Leader said he wanted to ensure all young people could pursue the career they wanted, irrespective of their socioeconomic status.

"She loved being a teacher and she was very good at it. She later became a teacher of teachers," Mr Shorten said today.

"She worked at Monash University over three decades, but she always wanted to be in the law."

He said his mother studied law in her 50s and he was proud of what she achieved.

"When I was in my first year of law school, she was in her final year," he said.

"She was her brilliant self and won the Supreme Court prize.

"She finally realised her dream and qualified as a barrister in her late 50s."

Mr Morrison described the article as an "upsetting story" and said the campaign debate should be focused on the policies, not the families, of the party leaders.

"Bill lost his mother five years ago and I can understand that would have upset him a great deal," the Prime Minister said.

"I would only extend my best wishes to him.

Daily Telegraph columnist Andrew Bolt distanced himself from the article and said he supported the Herald Sun, another News Corp newspaper, in not running the article.

"Shorten spoke truly when he said his mother sacrificed her dream to be a lawyer, taking up teaching to help her siblings," he wrote on the Herald Sun's website.

"There is no invention here."

In 2012, radio host Alan Jones told a Liberal fundraiser that then prime minister Julia Gillard's father had "died of shame" because of his daughter's political "lies".