Venezuela's self-declared interim leader Juan Guaidó has arrived back in the country's capital, Caracas, where he risks arrest. 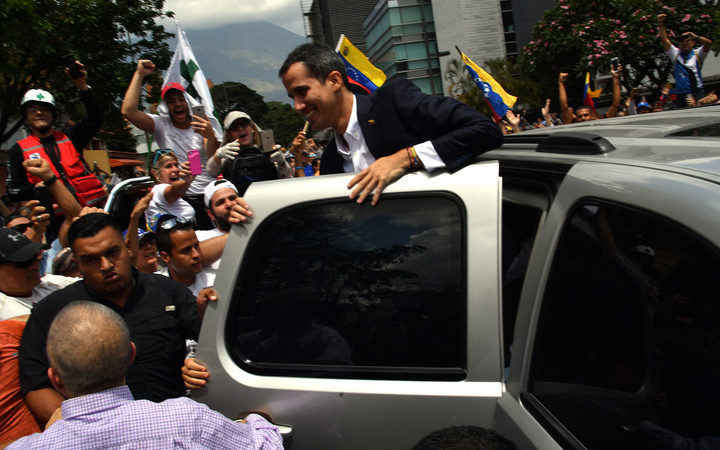 TV footage showed him being received at the Simon Bolivar International airport by diplomats from the US and EU nations.

Outside the airport he greeted a huge crowd of supporters who chanted "Guaidó, Guaidó" and "Yes we can".

He has called on President Nicolás Maduro to resign, and urged Venezuelans to join anti-government protests planned for Monday and Tuesday.

The two men have been at loggerheads for more than a month. While Mr Guaidó has been recognised by more than 50 countries, Mr Maduro, who is backed by China, Russia and Cuba, insists he is the only legitimate president.

Mr Guaidó left Venezuela to make a tour of other Latin American countries.

Why is Mr Guaidó's return risky?

After Mr Guaidó proclaimed himself interim president on 23 January, Venezuela's Supreme Court - which is dominated by loyalists of President Maduro - placed a travel ban on the opposition leader.

Mr Guaidó defied that to attend a fundraising concert in Colombia on 22 February organised by billionaire Richard Branson.

Mr Guaidó also led efforts to try to bring humanitarian aid, mainly donated by the US, into Venezuela. The government of Mr Maduro rejected the aid, arguing it was part of a US plot to overthrow him.

The president ordered the closure of borders with Colombia and Brazil. Soldiers blocked the aid trucks, leading to clashes that left at least five dead.

The Maduro government alleged - without giving any evidence - that the aid was contaminated and carcinogenic.

How likely is his arrest?

Flouting the travel ban imposed by Venezuela's highest court is likely to get Mr Guaidó into trouble.

President Maduro told ABC last week: "He can't come and go, the justice system had banned him from leaving the country. I respect the laws."

The Venezuelan government has in the past not been shy to arrest opposition leaders. Lawmaker Juan Requesens has been in jail since August over his alleged role in a drone attack on President Maduro. Others have left the country for fear of arrest.

However, when the secret police arrested Mr Guaidó on 13 January, he was released after half an hour.

Communications Minister Jorge Rodríguez said that arrest was "irregular" and the agents involved were dismissed.

Mr Guaidó appears willing to face the risk of arrest, saying: "If the regime dares, of course, to kidnap us, it will be the last mistake they make."

He also tweeted [in Spanish] that he had left instructions for his international allies for "a clear route to follow" should he be detained.

What would be the likely reaction to his arrest?

Arresting Mr Guaidó would cause a huge outcry.

US National Security Adviser John Bolton wrote on Twitter of a "strong and significant response".

EU foreign policy chief Federica Mogherini said that any measure that would put at risk Mr Guaido's "freedom, safety or personal integrity would represent a major escalation of tensions".

Diplomats from the Lima Group, a bloc of 14 Western countries created to tackle the Venezuelan crisis, said last week that "serious and credible threats" had been made against the life of Mr Guaidó.

It said "any violent actions against Guaidó, his wife, or family" would be met by all "legal and political mechanisms".

How secure is President Maduro?

While international pressure on President Maduro has steadily increased, the Venezuelan leader has dismissed all calls for him to step down and denounced them as attempted coups d'état.

According to Colombian migration officials, more than 500 soldiers have deserted from the Venezuelan army over the past weeks.

While this is a sign that lower-ranking soldiers are suffering the same hardships - shortages of food and medicine - as the general population and are willing to follow the more than three million people who have left Venezuela over the past years, there is no sign yet of a general switch in loyalty.

Government loyalists also still control much of the judiciary and the National Constituent Assembly, a body Mr Maduro set up to bypass the opposition-controlled legislative.

However, there are unconfirmed reports that Diosdado Cabello, the National Constituent Assembly head, sent his two children to Hong Kong, which the opposition thinks is a sign of growing nervousness.

The government also appears to be feeling the sanctions imposed by the US. Reuters reported last week it had taken eight tonnes of gold from the Central Bank to sell abroad to raise badly needed cash.