Deadly clashes have erupted in border towns across Venezuela as opposition activists try to bring aid into the country across government blockades. 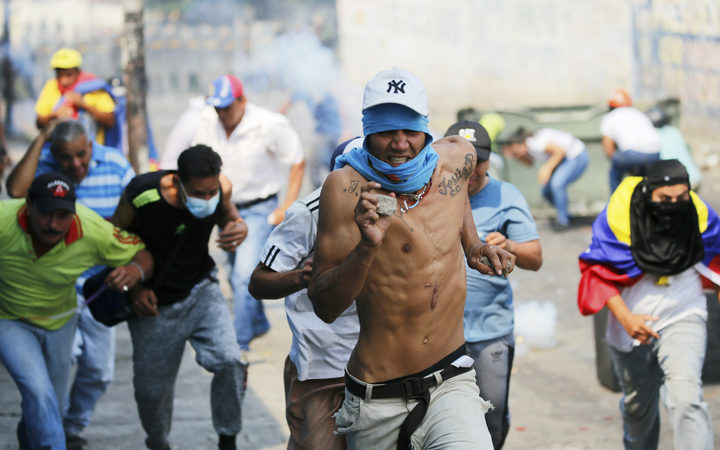 Demonstrators run from tear gas fired by Bolivarian National Guard officers during clashes in Urena, Venezuela, near the border with Colombia. Photo: AP

Troops fired tear gas at people looking to cross into Colombia and at least 13 members of the security forces have abandoned their posts.

President Nicolás Maduro said the border with Colombia is partly closed to stop aid being delivered. His government has broken off diplomatic relations with the country.

Yesterday, two people were killed by Venezuelan forces near the border with Brazil. Another two were reported dead nearby today.

How the day unfolded

Self-declared interim president Juan Guaidó had vowed that aid deliveries, which include food and medicine, would enter Venezuela on Saturday.

The first aid shipment has already arrived through Brazil and a second, en route from Colombia, is now in Venezuelan territory, he tweeted.

The delivery of aid to the stricken country has proven to be a key area of contention between the two men who see themselves as Venezuela's leader. 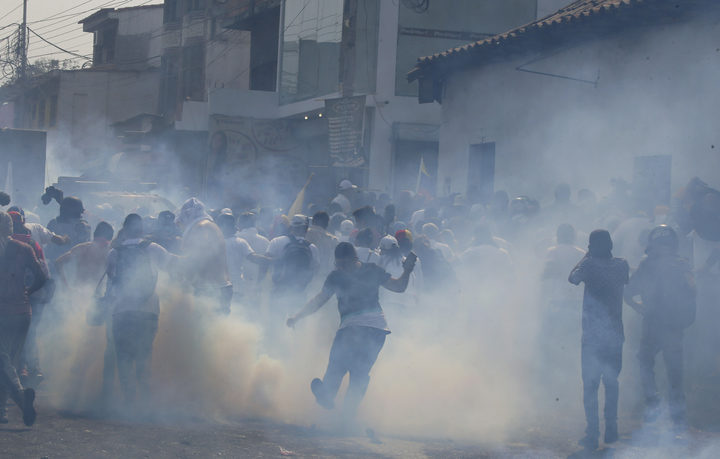 Tear gas is fired at protesters during clashes in Urena. Photo: AP

On the Venezuela-Colombia border, more than 20 members of the security forces are reported to have defected. A video posted on social media appears to show four soldiers publicly denouncing Mr Maduro and announcing their support for Mr Guaidó.

"We are fathers and sons, we have had enough of so much uncertainty and injustice," they say.

Local media report people jumping the barricades to cross the border, while opposition MPs have posted defiant messages on social media denouncing the use of force. Further reports show images of an aid truck being burned.

The BBC's Orla Guerin, at the Simon Bolívar International Bridge to Colombia, said Venezuelans were begging soldiers to be allowed to cross.

Standoff at Simon Bolivar Bridge - Venezuelans begging their countrymen for aid to be allowed through #Venezuela pic.twitter.com/qO3gK6SfaX

Mr Guaidó visited the Tienditas bridge on the Colombian side of the border, where he was accompanied by the country's president, Iván Duque.

"Welcome to the right side of history", he told soldiers who had abandoned their posts, adding that soldiers who joined them would be guaranteed "amnesty."

"We want to work!" people chanted as they faced riot police at the border town of Ureña in south-west Venezuela. Activists there were joined by 300 members of the "Women in White" opposition group who marched in defiance of Mr Maduro's attempts to close the border.

Meanwhile, a top ally of President Maduro has suggested the government would allow Venezuelans to accept aid "at their own risk", but that no foreign soldiers would "set foot" inside Venezuela.

The president himself tweeted that "there will not be a war", posting pictures of cheering crowds in Caracas.

"Take your hands off Venezuela, Donald Trump", he told crowds, accusing the United States president of using aid as a means to invading the country.

He accused Mr Guaidó of being a "puppet", an "American pawn", a "clown" and an "imperialist beggar."

A military outpost near the Venezuela-Brazil border has been taken over by a militia loyal to President Maduro, according to VPI TV.

While tensions flared on Venezuela's borders, there was relative calm in the capital. Thousands of people turned up for an opposition march, many dressed in white, a symbol of peace.

'More medicine, fewer bullets,' read one of the signs carried by the demonstrators. Another read 'Maduro, you're the cancer of Venezuela.'

The crowd marched to the military barracks - all part of a strategy to pressure the armed forces to side with Mr Guaidó and let the humanitarian aid in.

One woman described Saturday as 'breaking point' for Mr Maduro. It is certainly a test for the president but apart from a handful of defections at the border, so far his senior officers have remained loyal.

And there are still those who back Mr Maduro over what they say is a trojan horse in the form of humanitarian aid.

Not far away from the opposition march, Chavistas and government workers gathered, many dressed in red, the colours of the president's socialist party. "Hands Off Venezuela" was the message from here.

"If they want to help, lift all the sanctions against our country," state worker Frank Marchan said. "We don't need their mercy."