A team of French rescue experts began hunting through a huge expanse of debris on the outskirts of the Indonesian city of Palu today, looking for any sign of earthquake victims whose bodies can be recovered. 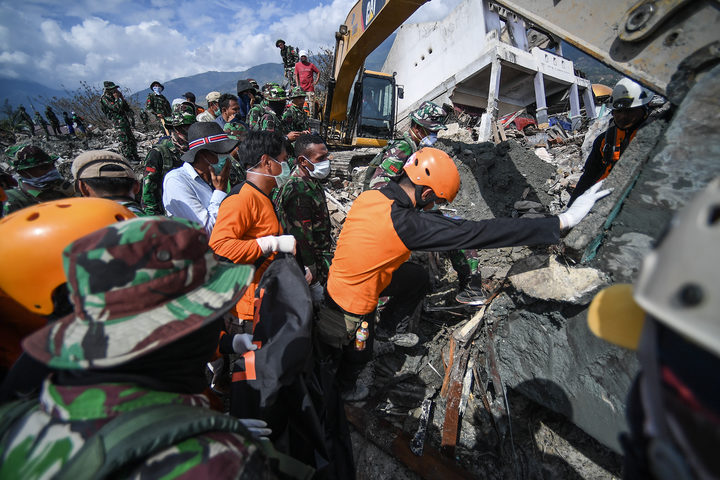 Indonesian President Joko Widodo has said all of the victims of the 7.5 magnitude earthquake and tsunami that struck the west coast of Sulawesi island on 28 September, killing more than 1500 people, must be found.

Hundreds of people are believed to be entombed in slowly drying mud that enveloped communities in the south of the small city of Palu when the quake triggered soil liquefaction, a phenomenon that turns the ground into a roiling quagmire.

Arnaud Allibert and four other members of the group Pompiers Humanitaires Francais were the first rescuers in to one grim expanse of jumbled debris, which is all that remains of the village of Petobo.

The team's task is to find and retrieve the bodies at the surface to clear the way for the heavy machinery to come in and dig deeper.

It's going to be a long, hard job.

"We're going to clear off all the superficial rubble that's on top and get into the spaces and see if there are bodies," Mr Allibert told Reuters as he surveyed a dreadful jumble of debris.

"If there are bodies in the spaces, we'll extract them. If we see body parts sticking out, we're going to dig to get the body out ... It's a long-term job, but after that, they'll come with the heavy machinery," he said.

The official death toll from the quake and the tsunami it triggered stands at 1571, but it will certainly rise.

Most of the dead have been found in Palu. Figures for more remote areas, some only just re-connected to the outside world by road, are only trickling in. 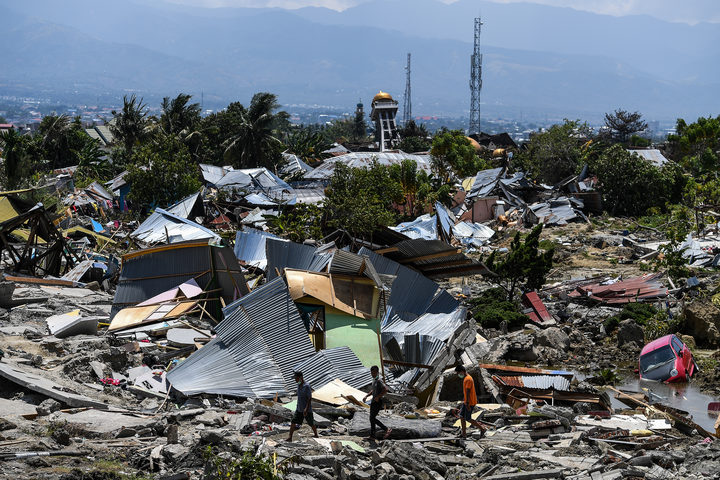 Residents walk past destroyed buildings in the Perumnas Balaroa village in Palu, after an earthquake and tsunami hit the area. Photo: AFP

No one knows how many people were dragged to their deaths when the ground under Petobo and nearby areas south of Palu dissolved so violently.

Homes were sucked into the earth, torn apart and thrust hundreds of meters by the churning mud.

The national disaster agency says 1700 homes in one neighborhood alone were swallowed up and hundreds of people disappeared.

Mr Allibert said it would take months to find all of the bodies.

"It might take four to five months to remove all the soil, and that's with the excavators," he said. "The excavators can't take huge amounts of soil because there are bodies underneath, you have to scrape the earth carefully."

Traumatized survivors are desperate for any help.

"There are so many corpses around here," said Irwan, 37, who like many Indonesians goes by one name.

"I'm from here so all my family are here, so many are gone," he said, reeling off a list of the missing including a sister, an aunt and cousins.

"Where are they? What if they are still alive? We need help to find them," he said.

The New Zealand Defence Force has evacuated 120 survivors from the earthquake-ravaged area.