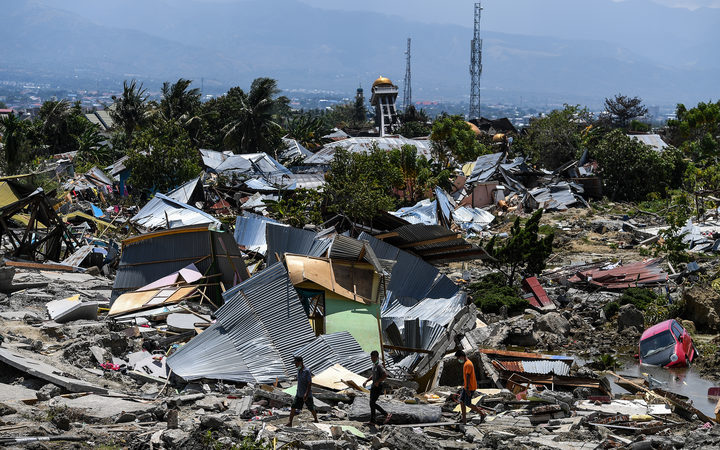 Residents walk past destroyed buildings in the Perumnas Balaroa village in Palu, after an earthquake and tsunami hit the area. Photo: AFP

International efforts to help survivors of Indonesia's devastating earthquake and tsunami are gathering pace as concern grows for hundreds of thousands with little food and water, six days after disaster struck.

The official death toll from last Friday's 7.5 magnitude quake has risen to 1407.

Foreign Affairs Minister Winston Peters is in Indonesia and has scheduled meetings with government ministers today and tomorrow.

A New Zealand Defence Force C-130 Hercules loaded with emergency supplies, including generators, water containers and tarpaulins, is on its way there.

"The plane will join an international air bridge effort to transport supplies and personnel into the affected area," Mr Peters said.

"The scale of the relief effort required following last week's earthquake and tsunami is becoming increasingly apparent, and there are many people in need of urgent humanitarian assistance."

New Zealand will also provide an extra $3 million for aid agencies working on the ground and for back-up funding for relief and recovery efforts in the coming weeks.