US President Donald Trump has questioned whether peace talks with Israel will ever resume, blaming the Palestinians. 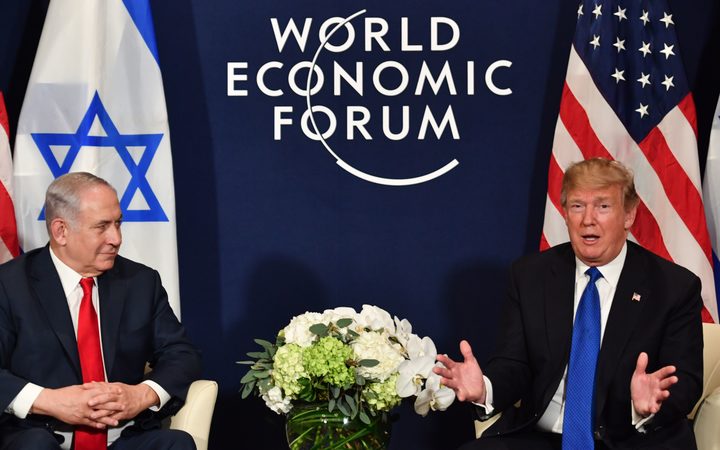 US President Donald Trump, right, and Israel's Prime Minister Benjamin Netanyahu during a bilateral meeting on the sidelines of the World Economic Forum in Davos. Photo: AFP

Mr Trump said Palestinians had "disrespected" the US in the wake of his controversial decision to recognise Jerusalem as Israel's capital.

"Respect has to be shown to the US or we're just not going any further," he told reporters at Davos.

The Palestinians say the US can no longer be considered a neutral broker.

President Mahmoud Abbas has called Mr Trump's declaration on Jerusalem in December the "slap of the century".

However, sitting alongside Israeli Prime Minister Benjamin Netanyahu at the World Economic Forum, Mr Trump said: "Israel has always supported the United States so what I did with Jerusalem was my honour."

Mr Netanyahu said under any peace deal the capital of Israel would be Jerusalem, and the status quo of the Temple Mount would be maintained.

He said Palestinians should have all powers to govern themselves, but none of the power to threaten Israel.

US ambassador to the United Nations Nikki Haley said her country would not "chase after a Palestinian leadership that lacks what is needed to achieve peace."

During a United Nations Security Council meeting on the Middle East, Haley criticized a 14 January speech by Palestinian President Mahmoud Abbas at a meeting of the Palestinian Central Council in Ramallah.

"A speech that indulges in conspiracy theories is not the speech of a person with the courage and theoutrageous and discredited will to seek peace," Ms Haley said.