The US embassy will move from Tel Aviv to Jerusalem before the end of 2019, vice president Mike Pence says. 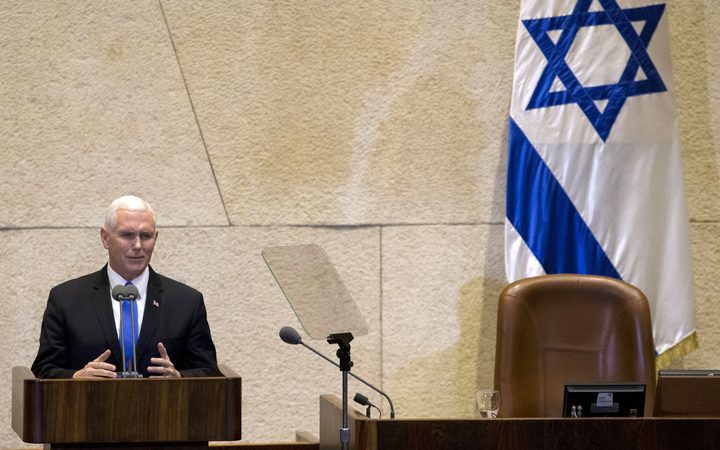 The date is earlier than some had expected when President Donald Trump declared last month that Jerusalem was Israel's capital and ordered the start of preparations for the embassy move.

Mr Pence made the announcement in a speech to the Israeli parliament.

He was briefly interrupted by Arab MPs who held up banners saying "Jerusalem is the capital of Palestine".

Mr Pence responded by smiling and saying that it was "deeply humbling to be standing before this vibrant democracy".

Rather than meet the vice-president, Palestinian Authority President Mahmoud Abbas travelled to Brussels to urge the EU to recognise a Palestinian state.

In December the UN, including New Zealand, voted overwhelmingly for the US to withdraw its decision to recognise it as the capital.

Why is the status of Jerusalem so controversial?

Israel regards Jerusalem as its "eternal and undivided" capital, while the Palestinians claim East Jerusalem - occupied by Israel in the 1967 Middle East war - as the capital of a future state.

Israeli sovereignty over Jerusalem has never been recognised internationally, and according to the 1993 Israel-Palestinian peace accords, the final status of Jerusalem is meant to be discussed in the latter stages of peace talks.

Since 1967, Israel has built a dozen settlements, home to about 200,000 Jews, in East Jerusalem. These are considered illegal under international law, although Israel disputes this.

Was Mr Pence's announcement a surprise?

Mr Pence defended Mr Trump's decision to break with international consensus in his address to the Knesset (parliament) on Monday, saying it had "made history" and "righted a 70-year wrong".

"The United States has chosen fact over fiction - and fact is the only true foundation for a just and lasting peace," he said.

Last month, US secretary of state Rex Tillerson said moving the embassy was "not going to be anything that happens right away" and was "probably no earlier than three years out".

That was because the state department still needed to acquire a site, commission architects and gain planning approval, and then build the compound.

However, last week senior US officials told the New York Times that the embassy transfer might happen in 2019 because diplomats had settled on a plan to convert an existing consular building in West Jerusalem.

Although Palestinian leaders refused to meet the vice president on this trip, he also said his country remained fully committed to achieving a peace deal to end the Israel-Palestinian conflict.

"We strongly urge the Palestinian leadership to return to the table. Peace can only come through dialogue," he said.

Earlier, Israeli Prime Minister Benjamin Netanyahu said the US and Israel were "striving together to achieve a truce peace, lasting peace, peace with all our neighbours, including the Palestinians".

President Abbas has accused Mr Trump of delivering the "slap of the century" and said he will no longer accept the US as a mediator.

Saeb Erekat, the secretary-general of the Palestine Liberation Organisation, said Mr Pence's "messianic discourse" was a "gift to extremists". It had proven that the US was "part of the problem rather than the solution", he added.

Mr Abbas made no mention of the speech when he met EU foreign affairs chief Federica Mogherini in Brussels. But he stressed that Palestinians were "keen on continuing on the way of negotiations because we believe it is the only way forward to reach a negotiated solution and peace between us and Israel".

He also called on EU member states to "swiftly recognise the state of Palestine", adding that there was "no contradiction between recognition and the resumption of negotiations".

Ms Mogherini said "the only pragmatic, realistic solution for Jerusalem has to come through direct negotiations" and called on all those involved in the peace process to "speak wisely and consistently with a sense of responsibility".