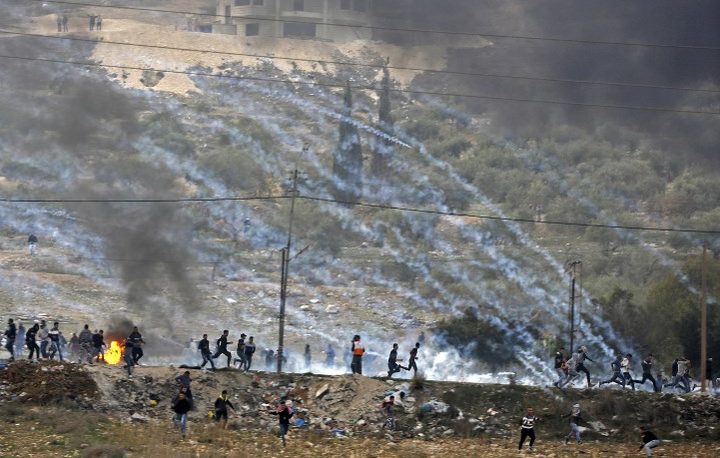 Palestinian protesters run for cover amidst smoke during clashes with Israeli security forces, as protests continue in the region over US President Donald Trump's recognition of Jerusalem as its capital. Photo: AFP / Jaafar ASHTIYEH

The deaths - which occurred along the Israeli border - raised the number of Palestinians killed in violence in Gaza and the West Bank to 12 since US President Donald Trump's recognition of Jerusalem of Israel's capital earlier this month.

Most of the deaths have occurred in Gaza, where protesters have been clashing with Israeli forces along the border fence.

Forces have used tear gas and live fire to disperse the crowds.

The two men who were reportedly killed over the weekend have been identified as Mohammed Dahdouh, 20, and Sharif Shalash, 28.

Also among the dead are two Hamas militants killed in an Israeli airstrike that was carried out in response to rocket fire from Gaza.

In Bethlehem, it was a subdued Christmas Eve, with spirits dampened by the violence.

Crowds were thinner than previous years, with visitors deterred by clashes between the Palestinian protesters and Israeli forces.

Although there was no violence on Sunday, Palestinian officials scaled back the celebrations in protest.

Claire Degout, a tourist from France, said she would not allow Mr Trump's pronouncement - which has infuriated the Palestinians and drawn widespread international opposition - affect her decision to celebrate Christmas in the Holy Land - the historical birthplace of Jesus.

"The decision of one man cannot affect all the Holy Land," she said.

"Jerusalem belongs to everybody, you know, and it will be always like that, whatever Trump says."

Mr Trump abandoned decades of United States policy on December 6 by recognising Jerusalem as Israel's capital and saying he would move the American embassy to the Holy City.

He said the move merely recognised the fact Jerusalem already served as Israel's capital and that he was not prejudging negotiations on the city's final borders.

But Palestinians - who seek Israeli-annexed east Jerusalem as their capital - saw the declaration as unfairly siding with Israel.

Last week, the United Nations General Assembly voted overwhelmingly to reject Mr Trump's decision. New Zealand is one of 128 nations that supported a UN resolution calling for the United States to withdraw its decision to recognise Jerusalem as Israel's capital.

The US announcement triggered weeks of unrest in the West Bank and Gaza Strip, including near-daily clashes in Bethlehem, which lies just south of Jerusalem.