Palestinian President Mahmoud Abbas has said he will not accept any US plan for peace with Israel, after it recognised Jerusalem as Israel's capital. 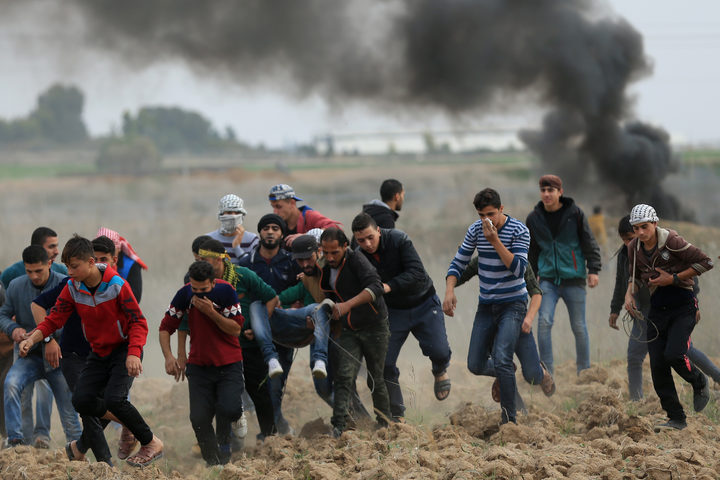 Palestinian protesters carry a wounded comrade during clashes with Israeli soldiers near the border fence east of Gaza City on December 22, 2017. Photo: AFP

New Zealand is one of 128 nations that supported a UN resolution calling for the United States to withdraw its decision to recognise Jerusalem as Israel's capital.

Washington has for the past few months been drafting a new peace plan, though it has not divulged any details.

Meanwhile, two Palestinians were killed in clashes with Israeli troops amid fresh protests over Jerusalem's status.

The men, both in their 20s, were shot dead in the east of the Gaza Strip, the territory's health ministry said. Israel said it was investigating.

There have been violent confrontations on the border between Israel and Gaza, as well as across the occupied West Bank, for the past three Fridays.

Palestinians clashed with troops in places including Bethlehem as the city, the traditional birthplace of Jesus, prepared for Christmas.

What did Mahmoud Abbas say?

The Palestinian leader reiterated that he no longer accepted the US as a mediator in the peace process with Israel. He also rebuffed a new US framework for peace being developed by President Trump's Middle East envoy, Jared Kushner, before it has been launched.

"The United States has proven to be a dishonest mediator in the peace process and we will no longer accept any plan from the United States," Mr Abbas told a news conference in Paris.

While the details of the US plan are not known, it has been devised for months and there has been an expectation it will be publicly launched in early 2018.

The last round of US-brokered peace talks between Israel and the Palestinians collapsed amid acrimony in April 2014.

Why has this happened now?

Mr Abbas has been emboldened by the outcome of the vote at the UN, which rejected any changes to the status of Jerusalem.

Thursday's vote came three days after the US used its power of veto to block a similar resolution at the world body's smaller, but more powerful, Security Council.

The US had warned countries not to support the latest resolution, threatening to cut off financial aid anyone who backed it.

However the resolution still passed with a decisive majority, as most nations, including Washington's allies, voted in its favour.

Why is the US at loggerheads with the international community?

Washington perceives the diplomatic opposition to its position on Jerusalem as an attack on its own sovereignty.

It says it has the right to decide its own policies, including where it places its embassies. Alongside recognising Jerusalem as Israel's capital, Donald Trump ordered the US embassy to be relocated there from Tel Aviv, breaking rank with the rest of the global community which maintain their embassies in the coastal city.

While the US has been widely criticised for reversing decades of neutrality on the issue of Jerusalem, Washington says it is fulfilling an election pledge by Mr Trump to implement the Jerusalem Embassy Act, which was passed by Congress in 1995 but had been continuously postponed.

President Trump's declaration has been condemned across Arab and predominantly Muslim countries, and hailed in Israel.

What is so contentious about Jerusalem's status?

The issue goes to the heart of Israel's conflict with the Palestinians and the wider Arab world.

The city is home to key religious sites sacred to Judaism, Islam and Christianity, especially in East Jerusalem.

Israel occupied East Jerusalem in the 1967 Middle East war. It annexed the sector in 1980, in a move not recognised internationally, and regards the whole of Jerusalem as its indivisible capital.

According to the 1993 Israel-Palestinian peace accords, its final status is meant to be discussed in the latter stages of talks.