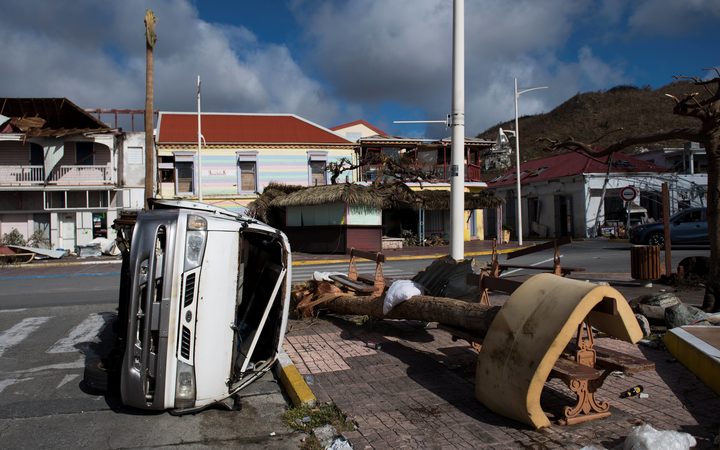 The Fort Louis Marina in Marigot is seen on September 8, 2017 in Saint-Martin island, devastated by Hurricane Irma. Photo: AFP

The category five storm made landfall on the Camaguey Archipelago, off the north-eastern coast.

But the Bahamas have largely been spared after Irma changed track.

In Florida, 5.6 million people, or 25 percent of the US state's population, have been told to leave as the storm approaches. At least 20 people are known to have died so far across the Caribbean.

Irma, which strengthened in the last few hours, hit the Camaguey Archipelago late on Friday, threatening nearby coastal towns and villages.

This is the first time a category five hurricane has hit Cuba in decades.

At 03:00 GMT on Saturday, Irma had maximum sustained winds of 257km/h, the National Hurricane Center in the US said.

The eye of the storm was about 190km east-southeast of the Cuban fishing town of Caibarien.

A hurricane warning is currently in effect in the provinces of Camaguey, Ciego de Avila, Sancti Spiritus, Villa Clara and Matanzas.

Some communities have lost power, and communication is becoming increasingly difficult with towns in more remote areas, the BBC's Will Grant in Havana said.

Residents are hoping the storm will just glance the island before heading across the Florida Straits to Miami.

Even that, however, could bring dangerous flash flooding and storm surges in many populated areas, BBC's Havana correspondent said.

"There are really strong gusts of wind. It is pouring off and on, and the lights are out," Anaida Gonzalez, a retired nurse in the Camaguey province, told Reuters.

About 50,000 tourists are fleeing or have fled Cuba, with resorts on the north coast now empty, the news agency reports. 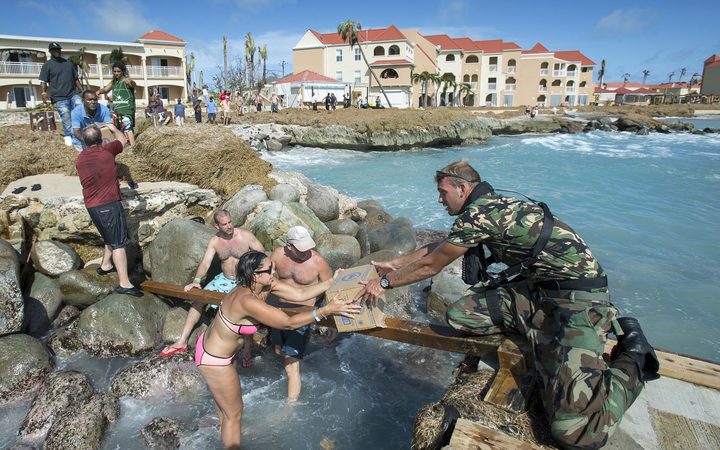 'We are running out of time'

Irma is expected to hit Florida on Sunday.

Brock Long, the head of the US federal emergency agency, warned that Irma would "devastate" either Florida or neighbouring states.

He said that parts of Florida would be without power for days.

"The entire south-eastern United States better wake up and pay attention," he said.

Florida Governor Rick Scott said all Floridians should be prepared for possible evacuation, and issued a stark warning to those in threatened areas.

"We are running out of time. If you are in an evacuation zone, you need to go now," he said.

Death toll climbs in the Caribbean

The death toll continued to rise on Friday in the Caribbean.

France's Interior Minister Gérard Collomb said nine people were dead and seven missing in the French territory on St Martin, an island shared with the Netherlands, and St Barthélemy.

Another death - the second - has been confirmed in the Dutch territory of Sint Maarten.

French officials said six out of 10 homes on Saint-Martin were so badly damaged that they were uninhabitable.

US President Donald Trump spoke on Friday to his French counterpart Emmanuel Macron to extend his condolences and offer support, the White House said.

French, British and Dutch military authorities have deployed aid - including warships and planes equipped with food, water and troops - to their territories.

Reporting from another badly damaged island, Barbuda, the BBC's Laura Bicker said the destruction there was worse than feared.

Which other areas have already been hit?

Are there more hurricanes to come?

Another storm, Jose, further out in the Atlantic behind Irma, is now a category four hurricane, with winds of up to 240km/h.

It is following a similar path to Irma and already hampering relief efforts in some of the worst affected areas.

Residents of Barbuda, where 95 percent of buildings have been destroyed by Irma, have now left the island as Jose approaches.

Hurricane Katia, in the Gulf of Mexico, made landfall on the Mexican Gulf coast in the state of Veracruz late on Friday as a category one storm but has been downgraded to a tropical storm.