At least 11 people are dead and structures across the Caribbean have been destroyed as Hurricane Irma sweeps towards Cuba, the Bahamas and the US. 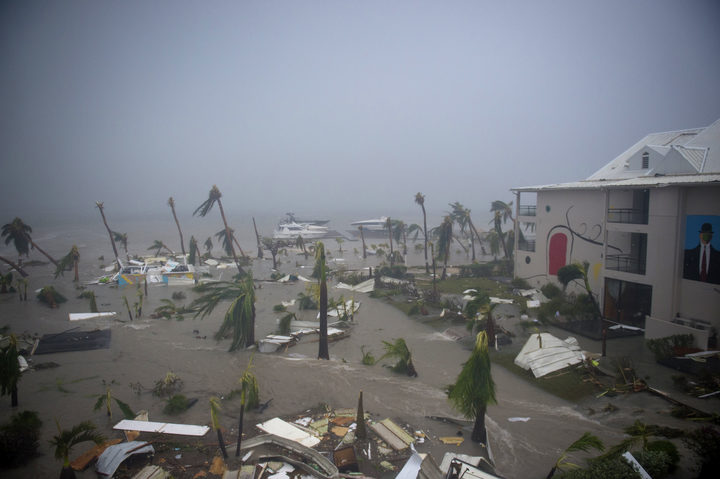 The Hotel Mercure in Marigot, near the Bay of Nettle, on French Saint Martin during the passage of Hurricane Irma. Photo: AFP

That lowered an earlier reported death toll of eight, which had included people who died for unrelated reasons.

At least one person was also killed and several others injured on the Dutch side of the Caribbean island, the Dutch government said on Thursday. 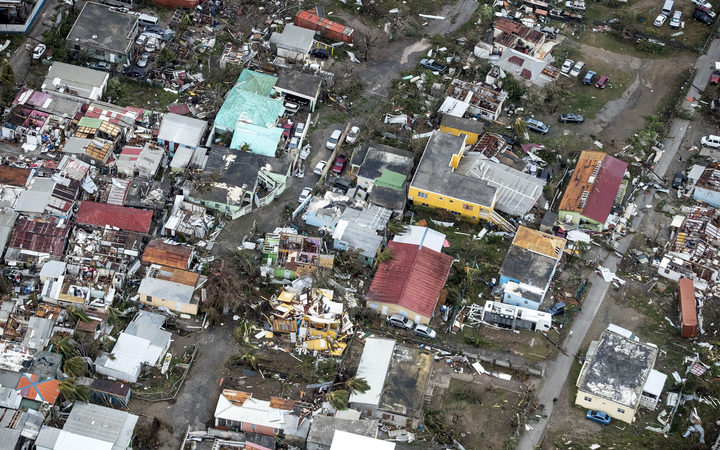 With winds of about 290km/h, the storm lashed several small islands in the northeast Caribbean, including Saint Martin and Saint Barthélemy, tearing down trees, flattening homes and causing widespread damage.

"The death toll is still uncertain because clearing operations are under way," Mr Philippe told a news conference at a crisis centre in Paris.

"There is considerable damage."

Mr Philippe quoted local authorities in Saint Martin saying 95 percent of the houses there had been damaged, and 60 percent were uninhabitable.

"There is no electricity, no drinkable water, gasoline is unavailable."

Mr Philippe said the government would on Friday declare a state of emergency, facilitating insurance compensation.

'Nothing exists in Barbuda right now'

The entire island of Barbuda - where at least one death, a child, has been reported - has been described as barely habitable.

The island's residents were set to be moved to neighbouring Antigua, the Prime Minister of the dual-island nation Gaston Browne said. 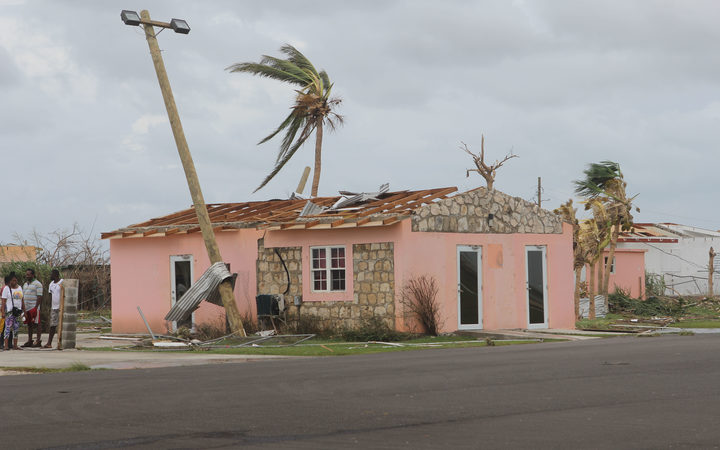 A destroyed house on the Island of Barbuda after Hurricane Irma hit the Island. Photo: AFP

The head of the local Red Cross, Michael Joseph, said no one had ever seen damage like this before.

"We're talking about everything being completely destroyed. It's electricity, it's roads, it's water. It's schools, it's churches, supermarkets, shops, everything.

"There is literally nothing that currently exists in Barbuda right now."

At least three people had died in Puerto Rico, the governor's office said: a 79-year-old woman who died of a fall while being transported to a shelter, a woman electrocuted in her home and a man killed in a traffic accident.

The US territory's capital, San Juan, saw waves higher than 9m. More than 6000 residents were in shelters, and many more were without power.

It knocked out power to about 70 percent of the island but the island escaped the large-scale devastation seen on nearby Barbuda and St Martin. 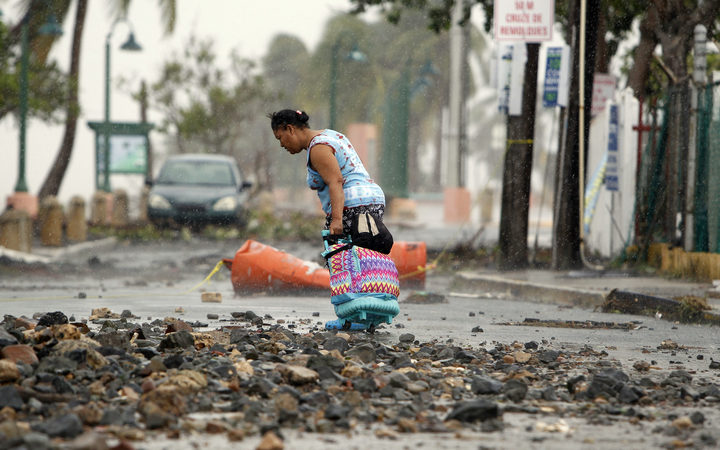 A woman pulls a travel case on a rock scattered road in the aftermath of Hurricane Irma in Fajardo, Puerto Rico. Photo: AFP

One person was killed on Anguilla and roads were blocked, with damage to the hospital and airport, power and phone service, emergency service officials said.

Amid criticism from many residents that the British government could have done more to help its territories, Foreign Office Minister Alan Duncan said a Royal Navy ship would reach the affected islands on Thursday with tents, vehicles and other relief equipment.

One Anguilla resident said the island looked as if it had been struck by a nuclear bomb, with roofs torn off many of the main buildings, including the hospital.

A surfer was also reported killed in Barbados. 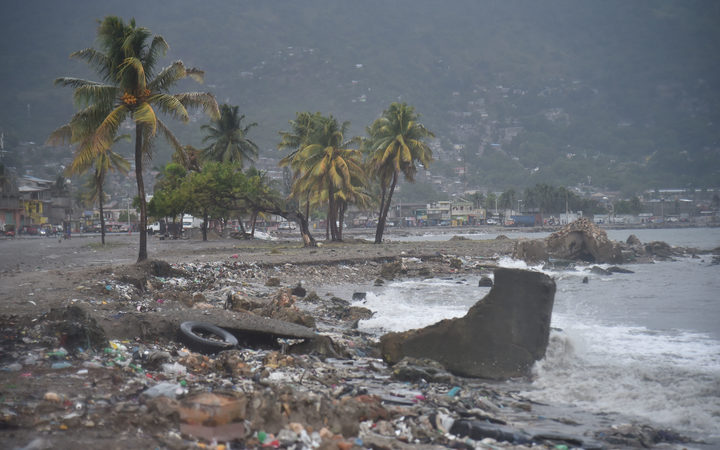 Debris and trash is seen on a beach in Cap-Haitien on the north coast of Haiti. Photo: AFP

Irma's eye was forecast to pass over the Turks and Caicos Islands and the Bahamas before moving towards Cuba's keys.

The low-lying Turks and Caicos islands, a British overseas territory, are said to be at risk of a storm surge, with the possibility of destructive waves up to 6m (20ft) higher than usual.

The Bahamas is mounting its largest ever evacuation.

Cuba also started evacuating some of the 51,000 tourists visiting the island, particularly 36,000 people at resorts on the picturesque northern coast, most of them Canadians.

Authorities in the Dominican Republic ordered evacuations in towns along the northern Atlantic coast such as Cabarete, a thriving tourist spot where trees were brought down by high winds but no severe damage was reported.

"We expect things to get worse."

Resort town Cabarete was expected to bear the brunt of the hurricane's winds and storm surge. Hotel executive Roque Alvarez said most tourists left prior to the storm, either flown or bussed out.

Irma is likely to hit Florida as a very powerful Category 4 storm on Sunday, with storm surges and flooding beginning within the next 48 hours, according to the US National Hurricane Center (NHC). Shortages of petrol in the Miami-Fort Lauderdale area worsened on Thursday, with sales up to five times the norm.

Officials in the US state urged all residents on its more than 2000km of coastline to get out. 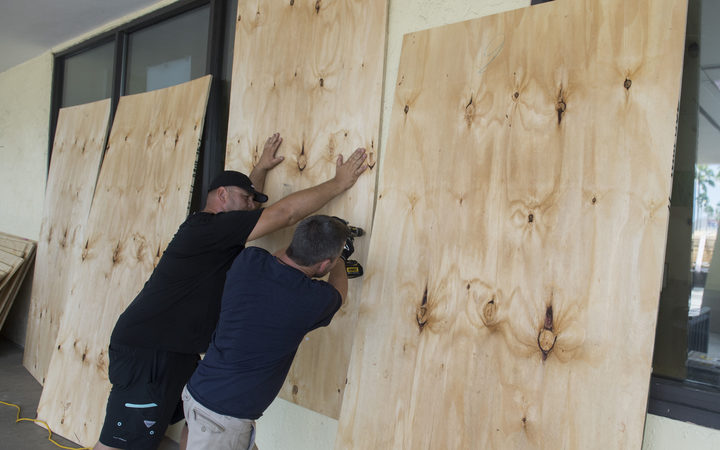 Workers put plywood over the windows at a Publix Supermarket in preparation for Hurricane Irma in Miami, Florida. Photo: AFP

"You've got to protect your family," said governor Rick Scott.

"Possessions can be replaced, your family cannot.

"This is serious and we cannot take chances. This is life threatening. This is not a storm you can sit and wait through."

Two other hurricanes formed on Wednesday.

Storm Katia, in the Gulf of Mexico, was also upgraded to hurricane status, and a warning was in effect for the coast of the Mexican state of Veracruz.

Hurricane Jose was about 1310km east of the Caribbean's Lesser Antilles islands.

It has been upgraded to a category three storm and is likely to take a similar path to Irma through the Caribbean.

Forecasters said Jose was expected to pass close to the Leeward islands, a collective name for islands from Dominica to Puerto Rico. Its exact path is as yet unclear but winds are not expected to be as strong. However, it may hit areas already devastated by Irma.

The storm activity comes after Harvey claimed about 60 lives and caused property damage estimated to be as much as $180 billion in Texas and Louisiana.