Hurricane Irma has pummelled the Turks and Caicos Islands after leaving a trail of destruction across the Caribbean, killing at least 14 people. 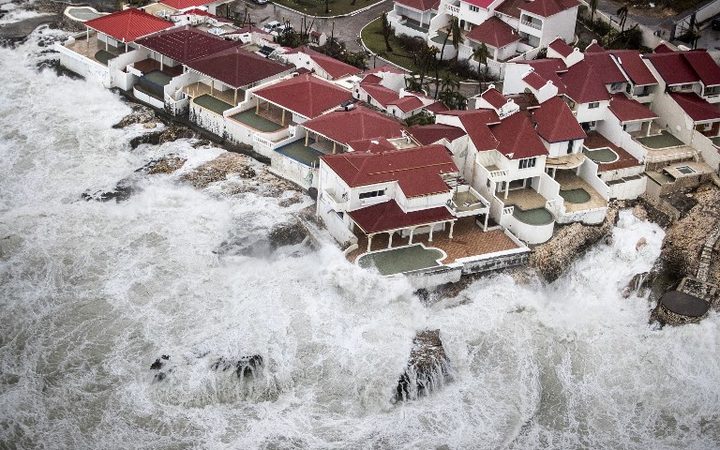 There has been some damage and flooding in Haiti, which is still recovering from the devastating 2010 earthquake.

Some 500,000 people were told to leave south Florida with Irma due on Sunday.

The hurricane's winds have moderated slightly, at up to 270km/h.

An estimated 1.2 million people have been affected by Irma and that could rise sharply to 26 million, the Red Cross says.

There are concerns that disease could spread rapidly in areas where drinking water and sanitation services have broken down, and officials have warned that the death toll is likely to rise.

Irma is currently near the Turks and Caicos Islands and is projected to move towards the Bahamas.

The storm is predicted to reach Cuba next, before hitting the US state of Florida at the weekend, with the head of the US emergency agency predicting a "truly devastating" impact.

On the archipelago of Turks and Caicos, with its population of about 35,000, one witness described a drop in pressure that could be felt in people's chests.

Governor John Freeman said people in low-lying areas were evacuated and sent to shelters. The islands' highest point is only 50m.

Virginia Clerveaux, director of the Turks and Caicos Department of Disaster Management and Emergencies, warned that even inland areas could be inundated by the storm surge.

"We are expecting inundation from both rainfall as well as storm surge. And we may not be able to come rescue [residents] in a timely manner."

Irma also caused some damage to roofs, flooding and power outages to the northern parts of the Dominican Republic and Haiti. Damage in Orient Bay on the French Caribbean island of Saint-Martin, after the passage of Hurricane Irma. Photo: AFP

In Cuba, thousands of tourists from coastal resorts in the exposed part of the island have been evacuated.

Britain, France, and the Netherlands have sent ships, rescue teams and emergency supplies to their territories that have been hit by Hurricane Irma.

Aid efforts are being hampered by damage to local airports and harbours.

Which areas have already been hit?

Irma is due to hit Florida as a category four hurricane on Sunday, bringing storm surges and flooding.

"If you look at the size of this storm, it's huge," Florida Governor Rick Scott said on Thursday. "It's wider than our entire state and could cause major and life-threatening impacts on both coasts - coast to coast."

US President Donald Trump said: "I can say this: Florida is as well prepared as you can be for something like this. Now it's just a question of what happens."

Hurricane and storm surge warnings have been issued for south Florida and the Florida Keys, the US National Hurricane Center says.

Roads and airports have been jammed as thousands of people tried to evacuate areas at risk, with reports of fuel shortages and gridlock on some roads.

Many tourists are stranded with no seats left on flights back to their countries as flights to and from airports in Florida are being suspended.

Another storm, Jose, further out in the Atlantic behind Irma, is a category three hurricane, with winds of up to 195km/h. Some slight strengthening is possible in the next day or so, according to the NHC.

Hurricane Katia, in the Gulf of Mexico, has strengthened a little but still is a category one storm, with winds of up to 140km/h. A warning is in effect for the coast of the Mexican state of Veracruz and the storm is expected to make landfall on Saturday.